How to Explore Zhongshan and Jiangmen

From Zhejiang to Guangdong

Zhejiang (Juh Gee-ang) 浙江 Province, where I am living currently, is a cold forty-something degrees Fahrenheit when I wake up in the mornings, but a thousand kilometers to the south, where I spent last weekend, it is a comfortable eighty degrees. It took twelve hours in total transit time but it was worth it to have some late night dinner outdoors with my old friends and enjoy the tropical Zhongshan evening.

Saturday morning my brother came in from Jiangxi (Gee-ang She) 江西, a twelve hour train ride to the north. After renting a car in the morning for $30 a day I rode over to a Starbucks to meet him.

Having a Starbucks in your city in China is a good sign of prosperity. It means there are now enough people with enough free time to enjoy a cup of coffee, and are willing to pay $7 for it. In Zhongshan I now count a total of five Starbucks, two more than my previous count seven months ago.

That day we met with several old students, had lunch, went to Karaoke to sing, ate supper, played some pool, and went to a club where a blonde American woman was the DJ. This is not a common site in a small city like Zhongshan, but it may be another sign that Zhongshan is moving up in the world.

Morning Tea and a Forty-Five Minute Drive to Jiangmen

Even if you haven’t been to Guangdong Province or Hong Kong, you may be aware of something called dim sum 点心 (pronounced Dee-en Sheen in Mandarin) or morning tea. It’s also called yum cha. It’s a Cantonese traditional tea time where people drink tea and eat small dishes like pork buns and various sorts of dumplings.

Sunday morning my brother and I had morning tea with old faculty friends at the college. We sipped tie guan yin tea 铁观音, also called steel Buddha tea in little cups, which is how it’s done at morning tea, and at most other tea-drinking occasions in China.

Small noodle and dumpling dishes were served to us plate by plate. A plate of dumplings would have three or four dumplings on it. The view below is a view of the city from our private window. 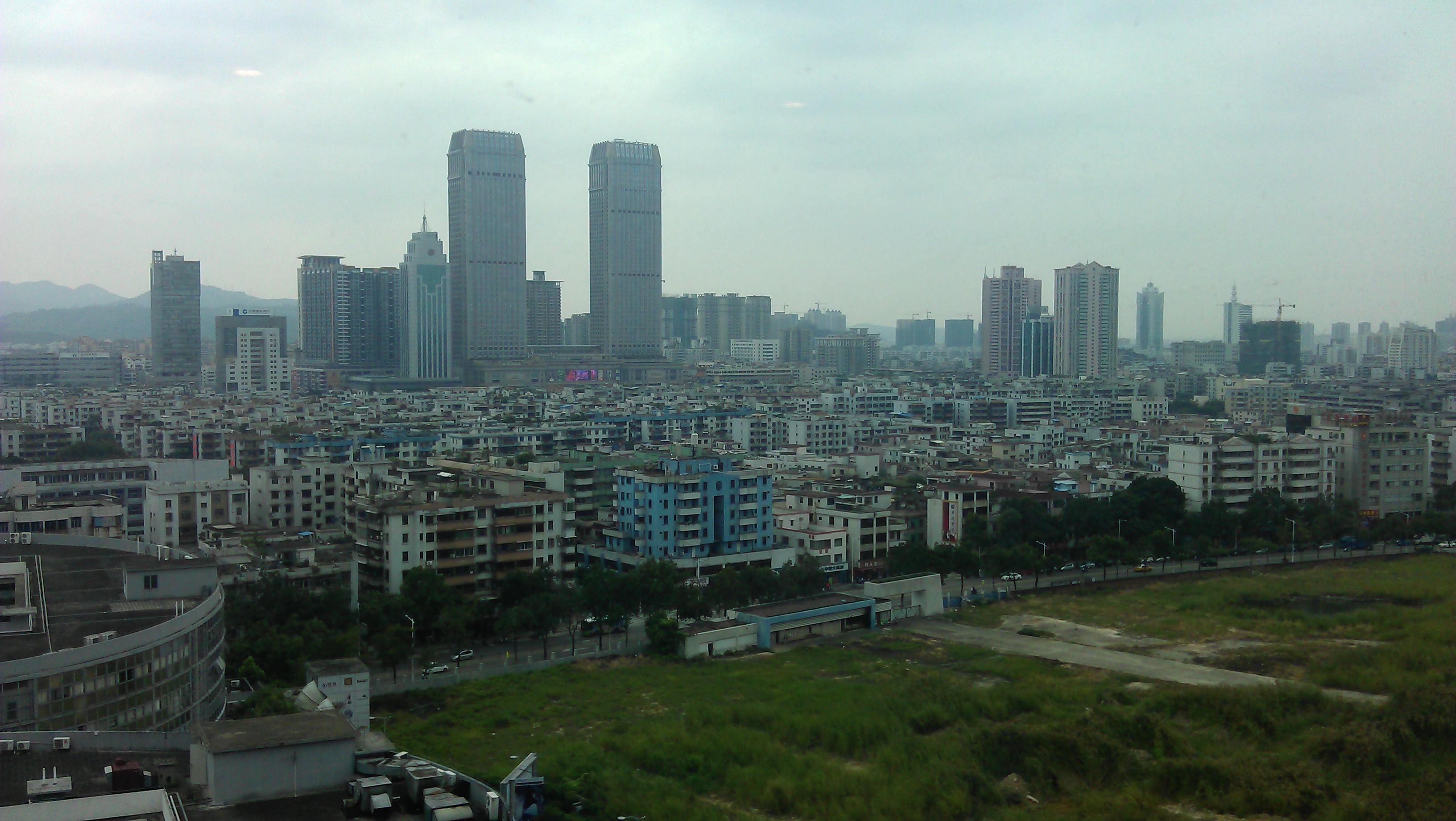 After tea we stopped by a different Starbucks to say hello to another friend who had just come from Shenzhen the day before. Two Starbucks down and three to go.

Sunday evening I drove to Jiangmen 江门 which is the city directly west of Zhongshan where I lived for six months in 2011. At first I did not like Jiangmen when I moved there a year and a half ago, but it has grown on me and now I actually really like the place. I still prefer living in Zhongshan, but Jiangmen is quieter and has rustic charm.

Like Zhongshan, Jiangmen too has a roughness and grungy-ness to it unique only to these southern Chinese cities. It is only forty minutes away from central Zhongshan by car via the G105 highway which fortunately doesn’t have that much traffic compared to other roads that connect the two cities.

On the way from Shiqi (Sure-chee) 石岐, the central district of Zhongshan, to Jiangmen one passes through the lighting town of Guzhen 古镇. Chinese cities are divided up into districts which are really just smaller cities under control of the main city the area is named after.

Guzhen is called the lighting town because people from all over the world come here to buy large quantities of lights. Many of my former students had internships here where they translated for Indian, Middle Eastern, North and South American, European, and African people. On one street there are several Indian, African, and Middle Eastern restaurants. The restaurant I sampled there was good too. It was called Sahara.

After crossing the Waihai daqiao (外海大桥) or Waihai bridge, one arrives in Jiangmen. The first district you come too is called Waihai, and after fifteen more minutes, the central district of Pengjiang (蓬江).

The change as one drives from Zhongshan across the river into Jiangmen is quite noticeable  The buildings are not quite as tall and there is more green space. Of course Waihai is more rural than Guzhen to begin with but it’s still an interesting change.

My first stop was at my friend’s tea shop where she sells tangerine peel tea called chenpi 陈皮. Chenpi tea is earthy and can be a bit bitter if you soak the peels for too long. My friend’s shop has been open for just over half a year and as business is good, she plans to open a coffee shop.

It is not uncommon to meet young entrepreneurs like my friend in China and I have met others as well.  In fact almost everyone in China always has some kind of business they are planning. People in China are entrepreneurial by nature.

One of my favorite Chinese entrepreneurs was a guy who had a hair cutting kit and stool on the back of his bicycle. He would pedal around town giving people haircuts. 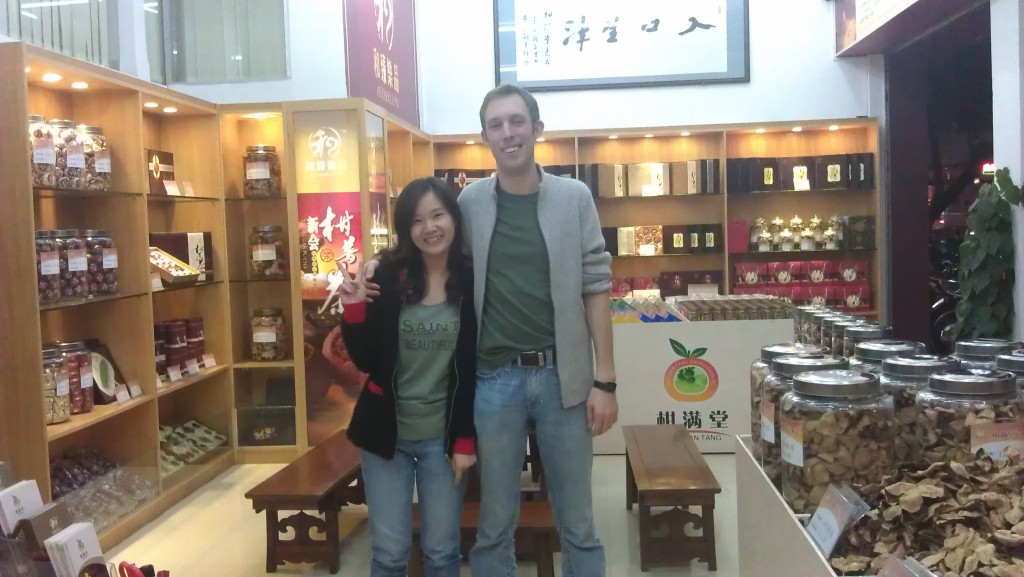 I had a supper of pizza with my good friend who has been teaching English in Jiangmen since we both came to China together in 2007. We had a long talk about dreams and finding a way to accomplish seemingly impossible things.

He sited several examples of successful businesses around town owned by foreigners in the last year. One such business is a pizza delivery service–he says the pizza is nice. Although China’s laws and policies seem foggy most of the time, there are definite (legal) avenues to getting things done here.

Upon waking it was time to bring the car back to the car rental service. I have now rented a car through this service, Yi Hai Zu Che (一嗨租车), on four separate occasions and each time I haven’t had any trouble at all. After returning the car I had some la bu fen 拉布粉 which is a long flat noodle (I know George orders one in a Seinfeld episode but I don’t think this is what it is as I’ve never seen it in the US).

Anyway, it is cooked with an egg, pork, and green onions, covered with soy sauce, and served with a side of soy milk. Total cost is about eighty cents.

I hit up Starbucks number three at the bottom of a Sheraton Hotel which opened a few years ago (both the hotel and the Starbucks that is). I was surprised to not see any foreigners as this is the most foreigner-concentrated part of the city with many hotels for those who stay here on business.

Only two more Starbucks to go and I will have completed the Zhongshan Starbucks tour. You get a free coffee for doing this.

Monday night my brother and I had our first dinner with some of his former students. The mall we went to was recently completed and has an H and M in it. One of the two towers above the mall is also a Hilton Hotel.

Over a bowl or rice and beef we talked about films. The three girls were keen to talk about their favorite films and TV shows which included South Park and Alfred Hitchcock’s works. We had them scribble down a few goodies such as Drive and American Beauty for when they got back to the dorms. All three had excellent English which is very impressive for eighteen or nineteen year-olds in China.

I had a second dinner at a Greek/Italian restaurant called Taverna, with a good friend of mine who recently started her own craft chain. It’s been part of her dream for a while, so it is awesome to see what was once merely an idea in her head, become physical reality.

After supper we met some of her friends who owned an art supply store and taught art classes on the second floor. I am always impressed by young business owners here, though like I’ve said this is pretty common in China. 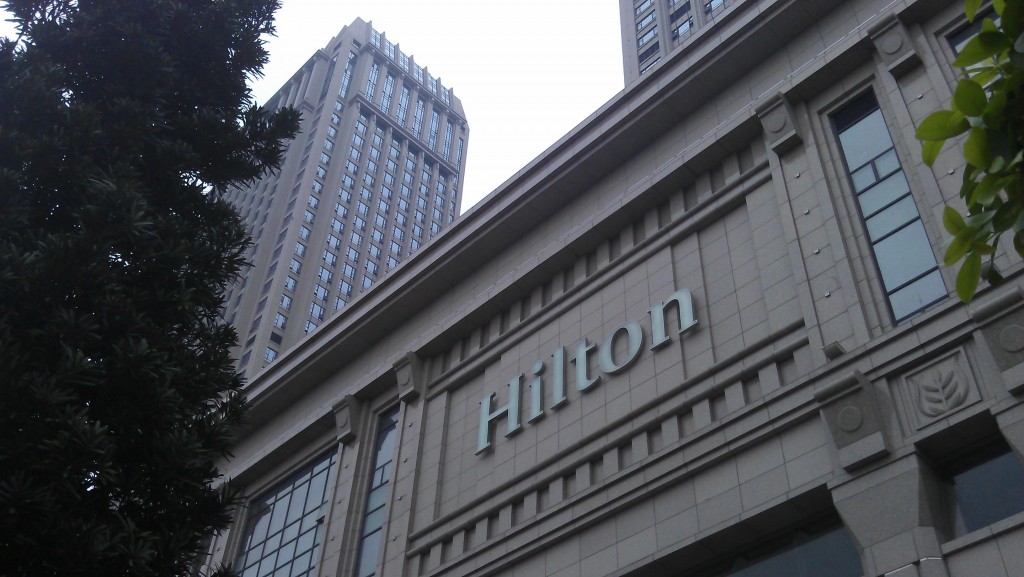 Tuesday morning my brother and I woke up with just enough time to squeeze in one more appointment before I took the bus to the Guangzhou airport. We met a few students from a favorite former class for lunch at a restaurant near the college.

Over some shou si ji 手撕鸡 (hand-ripped chicken) and complimentary cokes (free refills are not the norm in China), we told them of our new lives in other provinces and listened them talk about their recent independent travels around the country, their enterprising classmates who’ve already left college and started their own businesses, and how we were their favorite and most charming teachers.

On a side note, a Chinese colleague of mine, when asked about highlights of his trip to Las Vegas, and first trip to the US, said the free refills were one of the things that impressed him most—thus the uniqueness of the free-coke restaurant near the college.

I only saw twenty percent of the people I wanted to see this time, so thank goodness for things like QQ (Chinese Facebook/Instant Messenger) and Weibo (Chinese Twitter).