Before filming this most recent short film, I had a lot of doubts as to whether or not we were going to be able to pull the film off. Would I get kicked out of China for saying something bad about the country? Would people allow us to film in some of the settings I was envisioning? Would we be able to get enough help? 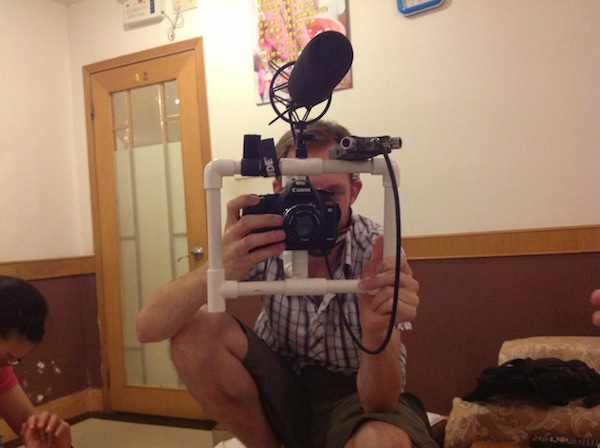 We worked on the script for almost a year before beginning filming. The script I had initially written was about eighty pages. Since we didn’t have the money, the time or resources to make a feature-length film, we thought it would be better to make a short film, enter it into a film festival, and get recognized by a big film production or distribution company. I still harbor hopes of making a longer film one day.

After the script for the short film was completed (there were five to ten drafts total), I needed to move a thousand kilometers back to Zhongshan from Jiaxing, assemble the equipment we would need, get familiar with all the equipment, find the majority of the actors and get them up to speed, scout all the locations, assemble a crew, and continue rewriting the script all within three weeks. 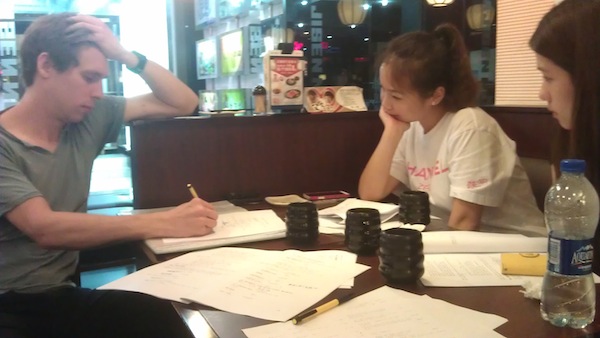 Moving Back to Zhongshan

My good friend in Zhongshan was able to find a reasonably priced yet quality apartment in the city for $60 a month so that I could move right in and get to work. A major advantage of living in China is that you can live fairly well for not very much money, while still making a good income on par with a salary of that in the US.

After a trip to Hong Kong, ordering some professional audio equipment online, and building a small camera rig out of PVC pipe, we were ready to go on equipment. 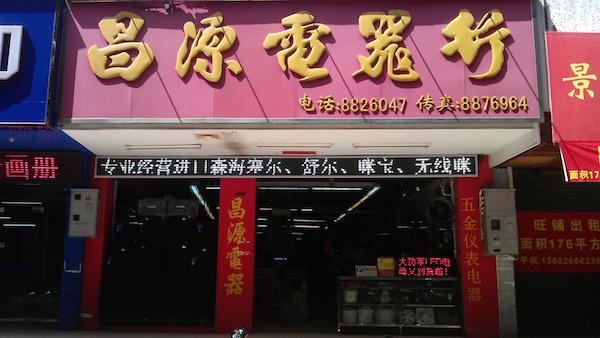 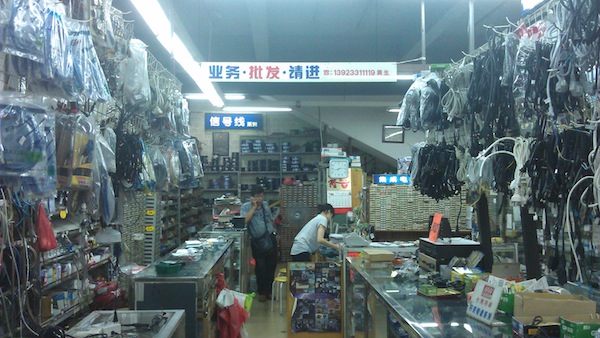 How to Make a Camera Rig in China

Before filming, we still needed to put some gear together (lighting, audio, lenses, cables, boom pole, etc.). One such piece of equipment we needed was a camera rig so our shots would not be wobbly.

My brother found a make-your-own-PVC-camera-rig video on Youtube by The Frugal Film Maker. The video showed how to build a small camera rig out of PVC pipe. Fortunately there are more than a dozen wood, metal, and hardware shops that sell PVC within a few blocks of where I live.

My PVC guy was kind enough to put together the entire rig using my translated notes. Though his skill with plastic piping was formidable, his Chinese was so so. This was a good opportunity to try out the Cantonese I had been studying. He and his wife were excited to talk with me in Cantonese, and although I couldn’t understand half of what they said, I divulged he was telling me about some historic areas of the city containing some ancient buildings—which I later visited and photographed. 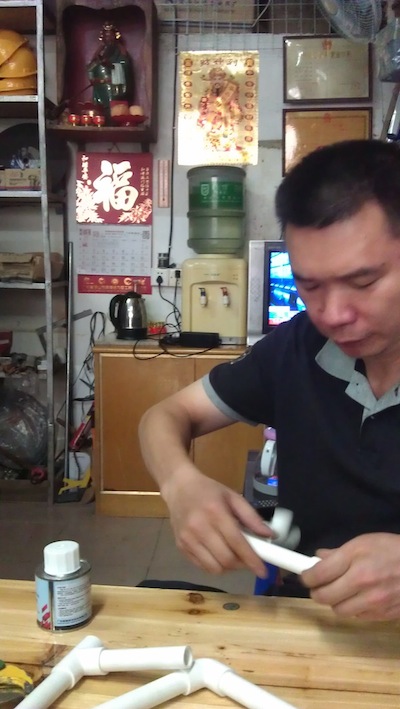 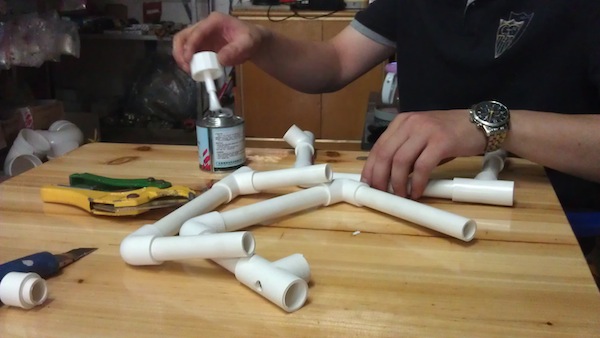 He finally returned with the correct screws in hand, and using a soldering iron was able to burn holes in the PVC and then cut away the remaining plastic with a scissor blade so that the screw would fit in. I used the camera rig that way for the first few days of filming and was very pleased. And of course it only cost $3-4 for parts and labor. 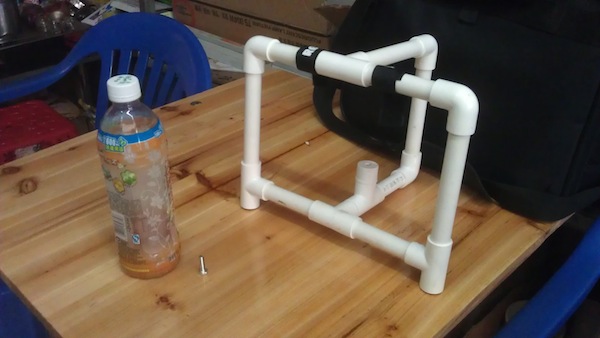 During the first few days of filming, my friend acted as our boom operator. But because many shots necessitated me tracking the actors as they walked, it became a pain to have someone else try to follow me on foot with a boom pole and mic, down some crowded lanes. Thus it became more convenient for me to directly attach the mic to the rig and film and record at the same time. To do this however, I needed to attach the shock mount to the rig and put the 4-meter XLR cable into a backpack which I then wore. As it is already a hundred degrees in Guangdong in the summer this set up was not ideal.  It would be better to have a few more screws put into the rig so that I could attach a recorder and shock mount for the shotgun microphone.

To do this I made a trip back to my PVC guy who was able to burn a few more holes in the plastic in places I deemed suitable for screwing in a recorder and shock mount for the microphone. The adjustments he made worked great and I no longer needed to wear a back pack filled with 4 meters of cable or hold a voice recorder in my pocket.

There are six main roles in the film, and a few weeks before filming, we still had two more roles to fill. We did not know anyone who would be able to play an old foreigner, or a young, attractive Chinese girl to play the female lead.

I put out casting calls on Sina Weibo (China Twitter), Weixin (China Whatsapp), and Guangzhou Stuff, a Facebook-like site where foreigners and Chinese alike can meet up in Guangzhou, a big city in China near  Zhongshan. A few people got back to me, but some wanted money and it would be a pain to also pay for them to come out to Zhongshan on such short notice.

We asked friends if they would play the part, but while many said they would, they really didn’t care enough to do it. Other friends told me we would need to pay the actress if we wanted her to kiss during one of the scenes as the script called for.

Fortunately, the film department at Zhongshan College was able to help find a leading woman for the main female role. She was then able to recruit some of the extras we would need.

We really needed a guy to play the old foreigner but this being China, we were short on foreigners, especially those that knew something about acting or had any experience. However, as luck would have it (or maybe it was meant to be) my good friend knew just the guy. His real name was the same name as the character in the film, he had a sword tattoo on his arm similar to the man’s his character is based on, had acting experience, and was excited to give the role a go.

One of my good Chinese friends was able to make time for us so that he could be our audio equipment operator and driver.  We now had one week to shoot all the scenes.

With all of the gear ready, the actors up to speed, the crew assembled, and a plan for shooting in place, we were ready to begin production. 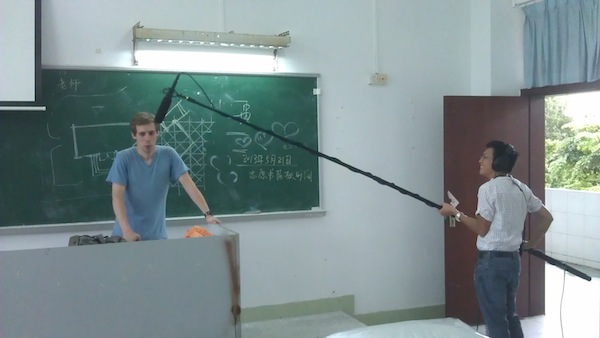