In July of 2018, my mom came to visit me in Taiwan. It was her second trip to Asia, the first being to China in 2007, when I taught English there. I was very happy to see her, I knew how long and tough those long flights from Minnesota over the Pacific can be.

Outing with the Monks of Hwadzan

On her first full day, we went to the Hwadzan office to visit venerable Wu Dao and the other monks of Hwadzan. I think venerable Wu Dao was surprised by the visit, and he surprised us by inviting us on an impromptu excursion to some special places outside of Taipei.

On this journey were three venerables: Wu Dao, Zhuang Yan, who was like Wu Dao’s companion, always helping him with things, and Zhuang Xing, the humorous and energetic abbot of Shuangxi Temple who had hosted Big Bear and I when I first arrived in Taipei the previous summer. Ama also joined us.

In the tradition of Buddhism that these monks follow, when a person becomes a monk, they are given a name by the monk who ordains them. In the case of these Hwadzan monks, the character Wu (悟) is given to all of the monks ordained by master Chin Kung, such as venerable Wu Dao (悟道). Wu means “to awaken.” The monks ordained by venerable Wu Dao all use the name Zhuang (莊) meaning “serious” or “grave.” These monks included Zhuang Yan (莊嚴) and Zhuang Xing (莊行).

Our first stop was Gongbei Temple. This temple is located in Xizhi, a district of New Taipei City, to the east of Taipei. Xizhi is also venerable Wu Dao’s hometown, and he now serves as the abbot of the temple, which is more than 110 years old. Since the time of its first abbot, the traditionally Taoist temple has advocated the teachings of the Confucianism, Taoism, and Buddhism. There are altars to the three saints of these religions, Confucius, Lao Tzu, and Shakyamuni Buddha, inside.

Venerable Wu Dao gave Ama, my mom, and I a tour of the grounds. He said that his mother used to take him to this temple when he was a kid. It is a very idyllic and peaceful place. Inside the temple we visited various altars and lit incense for each of them. 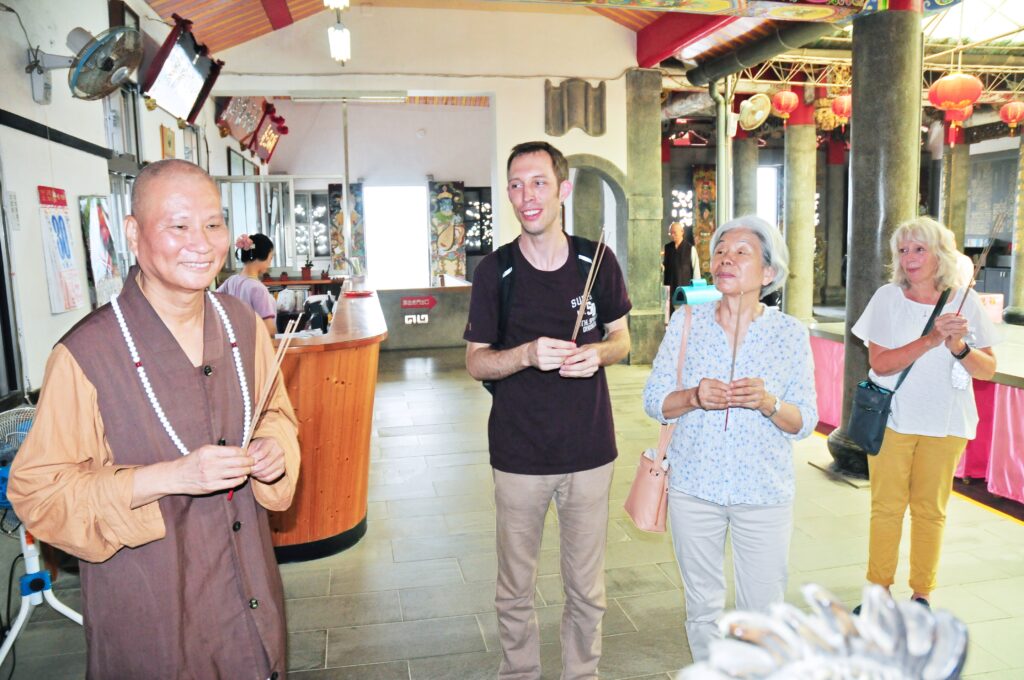 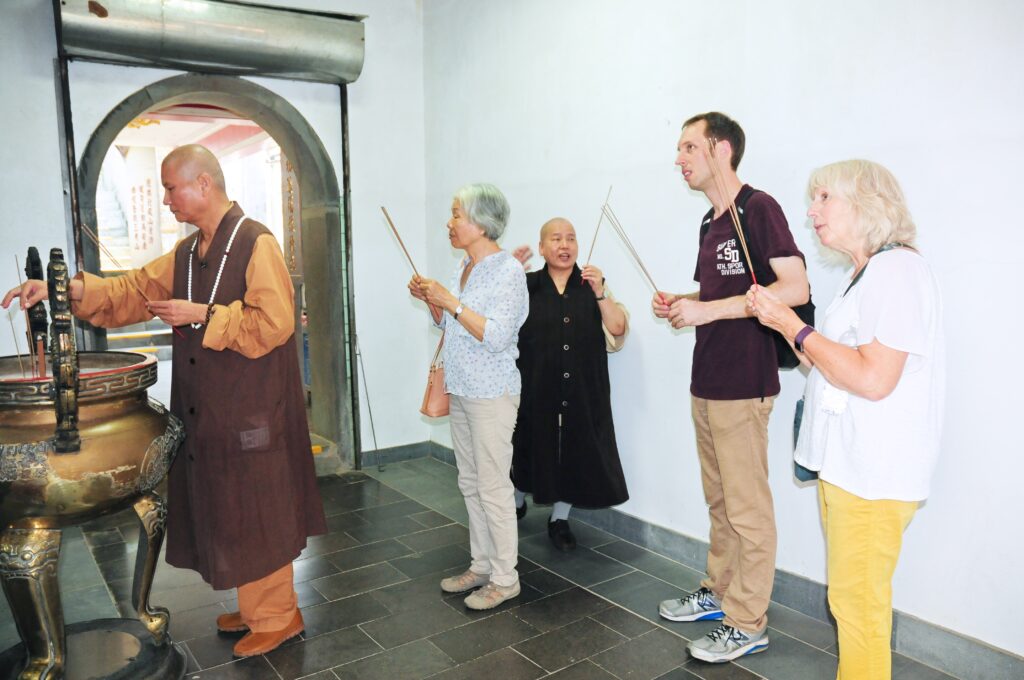 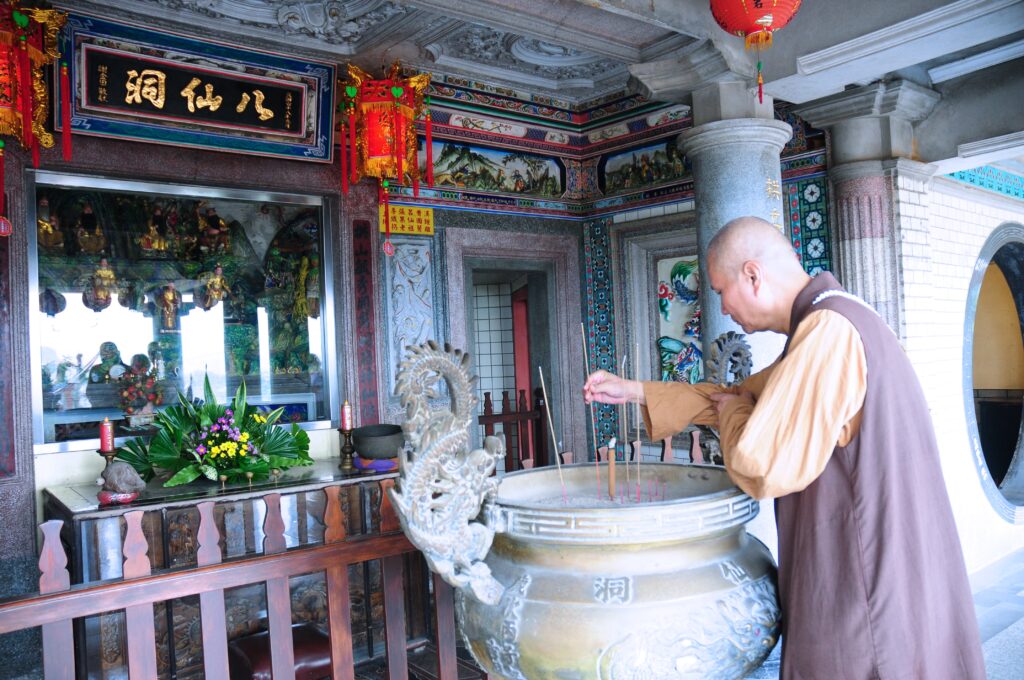 At one point, venerable Zhuang Xing stopped to point out a shrine of The Eight Immortals, eight immortals from Chinese mythology. These immortals are revered by Taoists and are popular in secular Chinese culture, including art and literature.

As my mom and I stood taking in the beautiful view of the valley from the temple, venerable Zhuang Xing remarked that the feng shui of the temple was very good, since the mountain arms of the valley opened outward and would be able to attract much wealth. 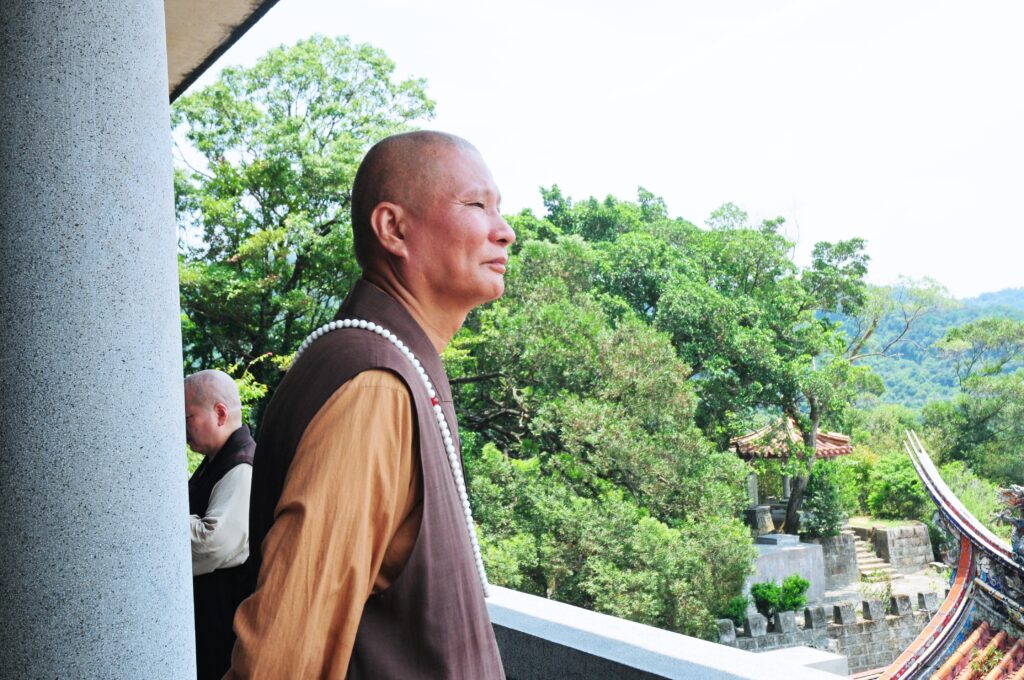 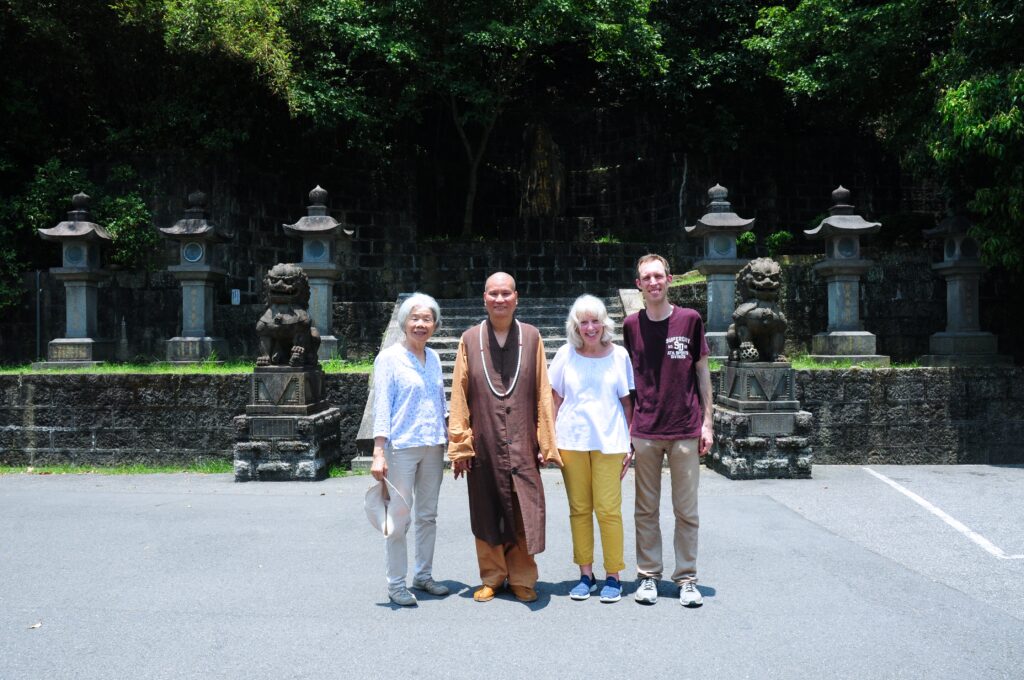 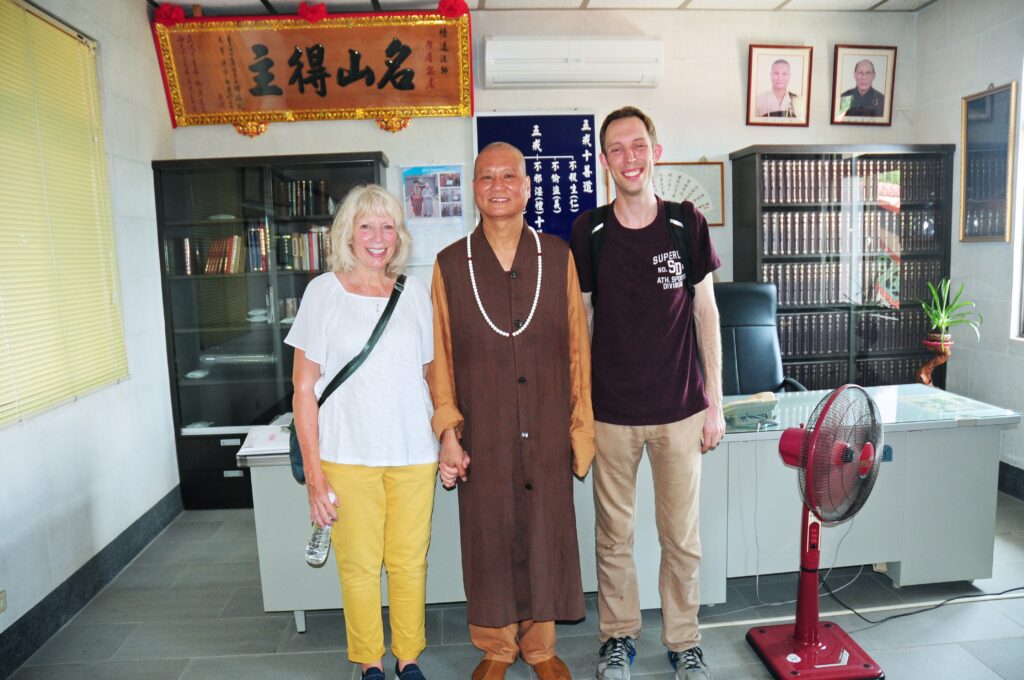 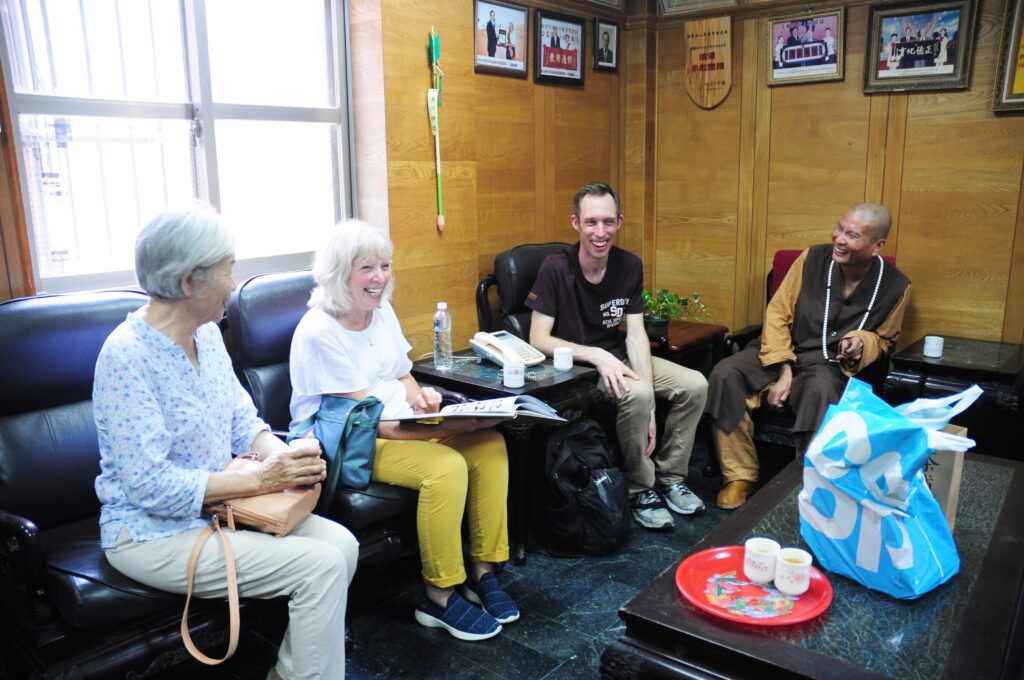 Our next stop was lunch in the port city Keelung, along the northeastern coast of Taiwan. We dined in a private room at a very nice restaurant on a hill overlooking the city’s main harbor, which was filled with ships. 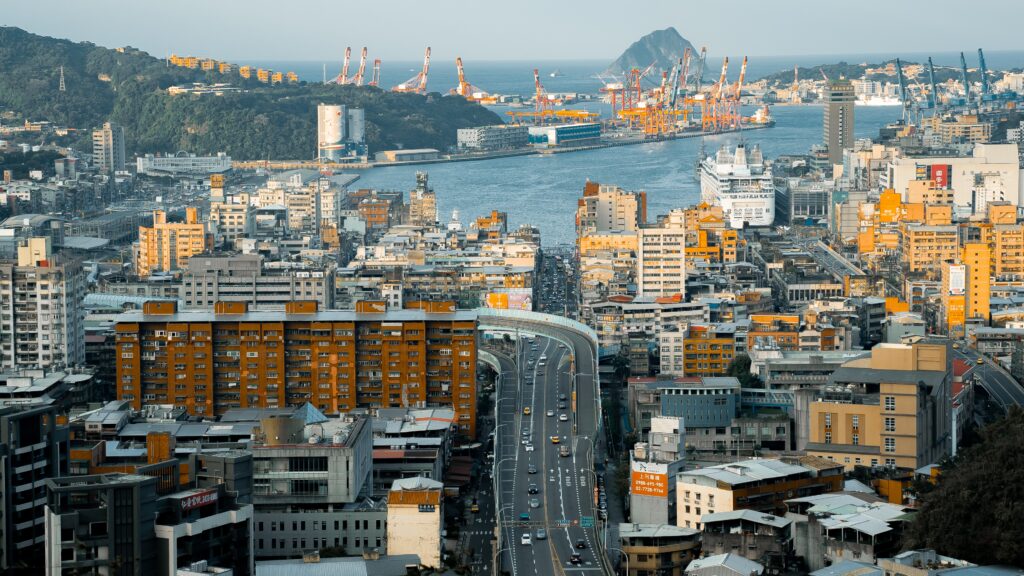 Lunch included monkey head mushrooms, a meaty, juicy mushroom that looked kind of harry. Despite the odd name, they are delicious and one of my favorite types of mushrooms.

This was the first time I had seen the monks of Hwadzan since I started working for Akasa, and over lunch Ama recounted the story of how I came to work for Yitsen and David at their company. After hearing the story venerable Zhuang Xing remarked to me, “Haoran (my Chinese name), you have met many distinguished people!” I think he was referring to meeting venerable Wu Dao and now Yitsen and David, the owners of Akasa. 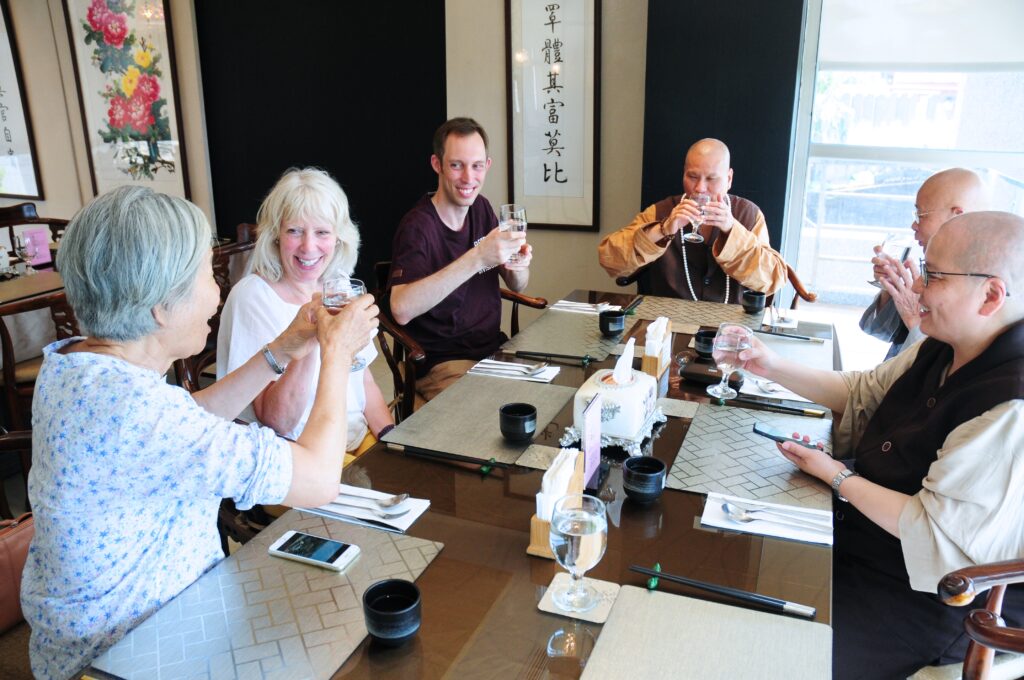 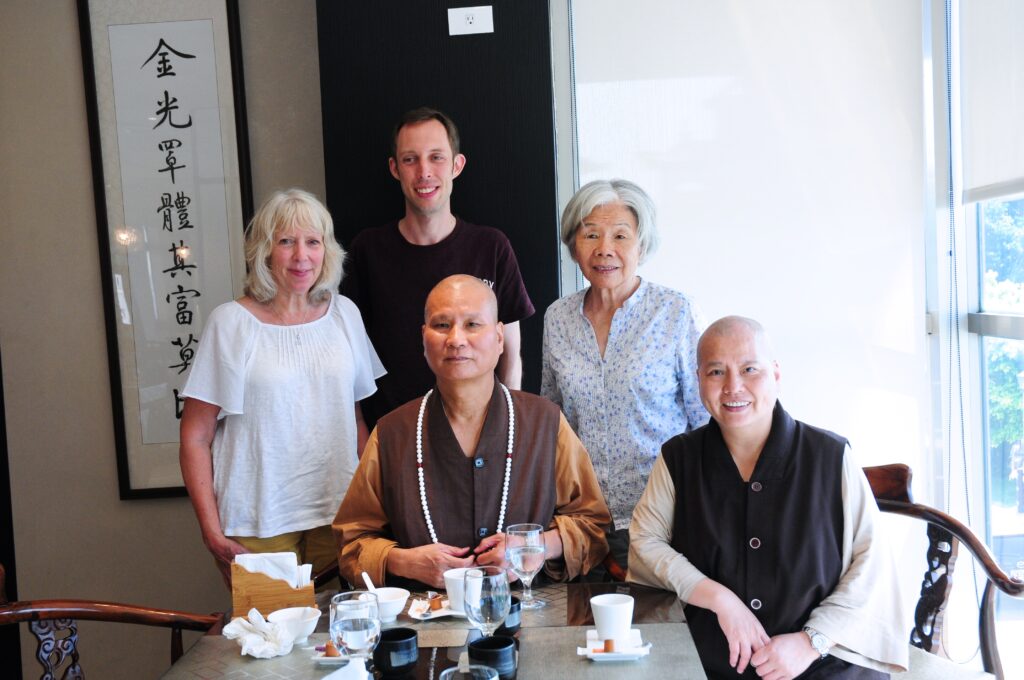 Our last stop of the day was to Shuangxi Temple. After my initial visit the summer prior, I had gone back with Mark and Big Bear a few times, but I hadn’t been back for a visit in half a year. 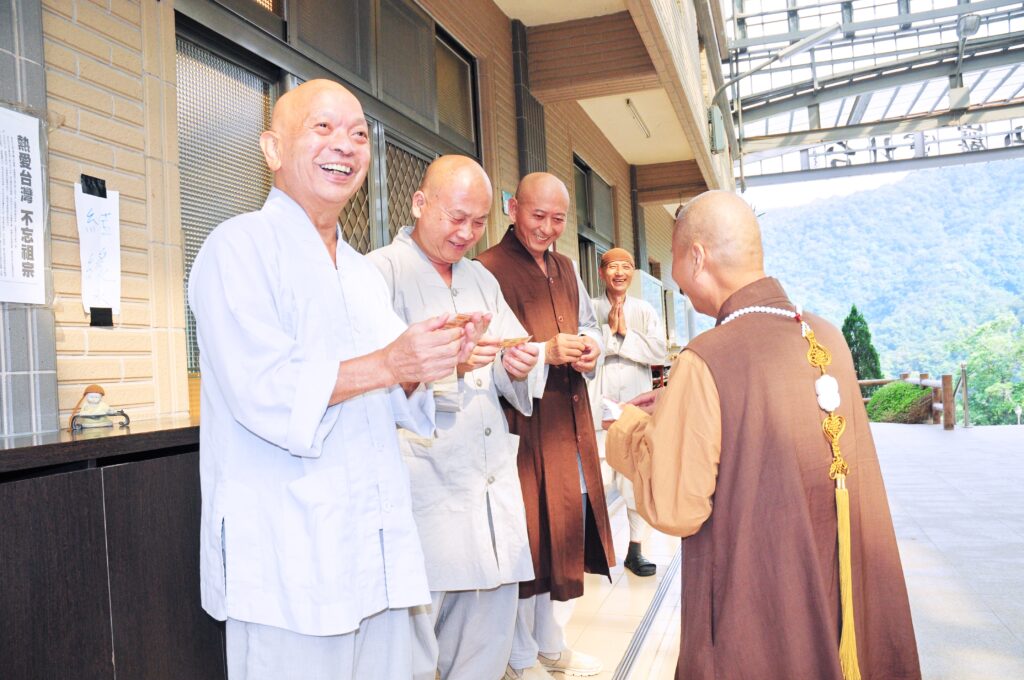 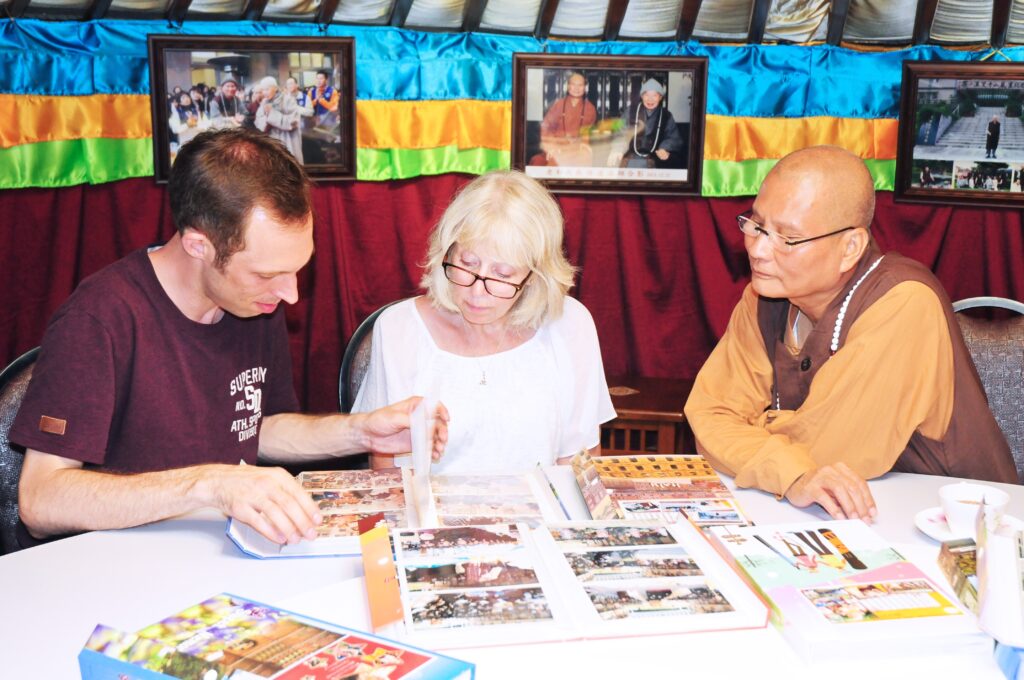 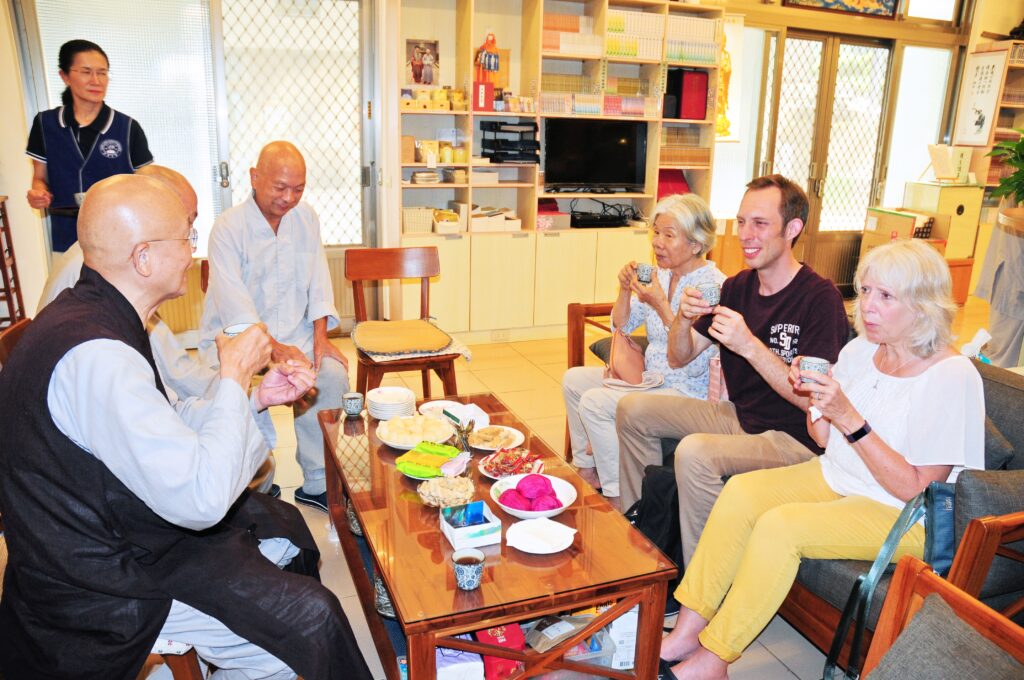 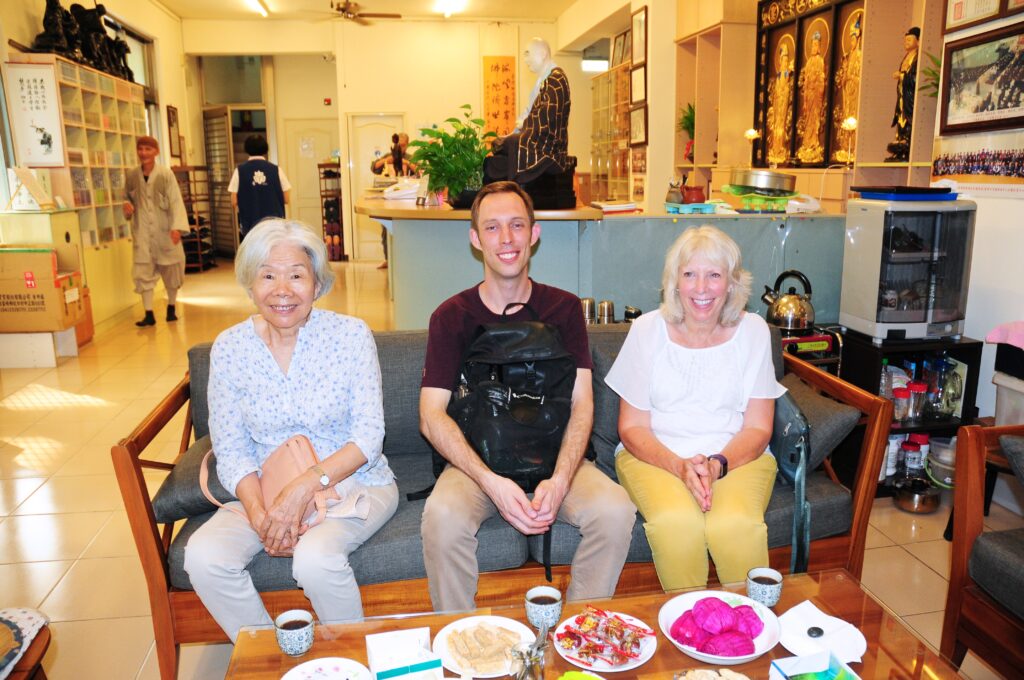 Later, we toured the grounds of the monastery and venerable Zhuang Xing explained plans for major renovations that would expand the capacity of the temple. 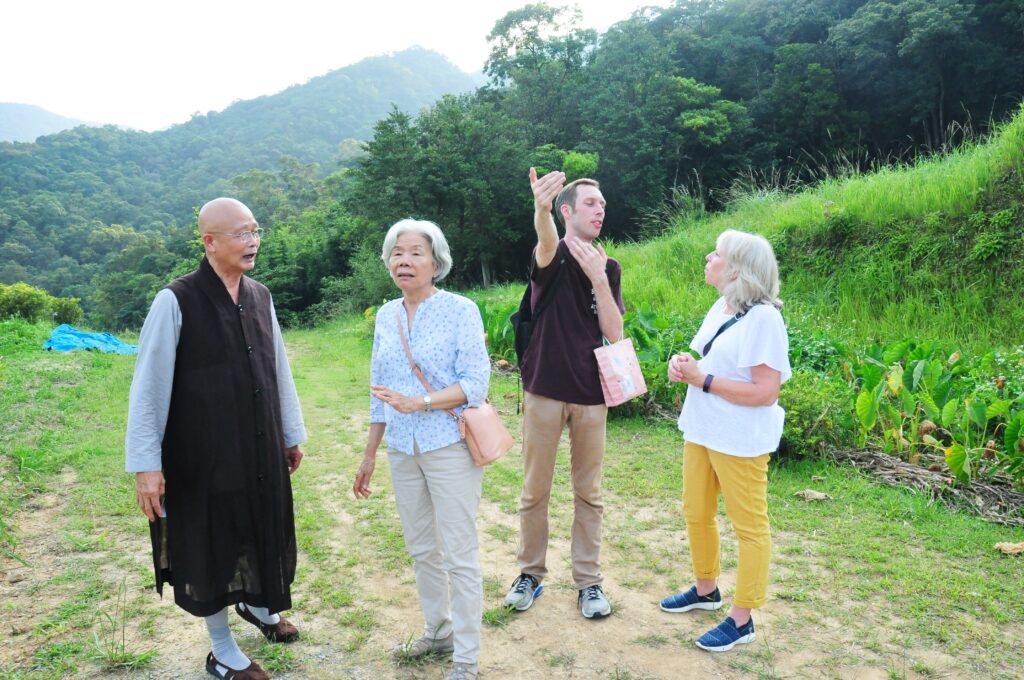 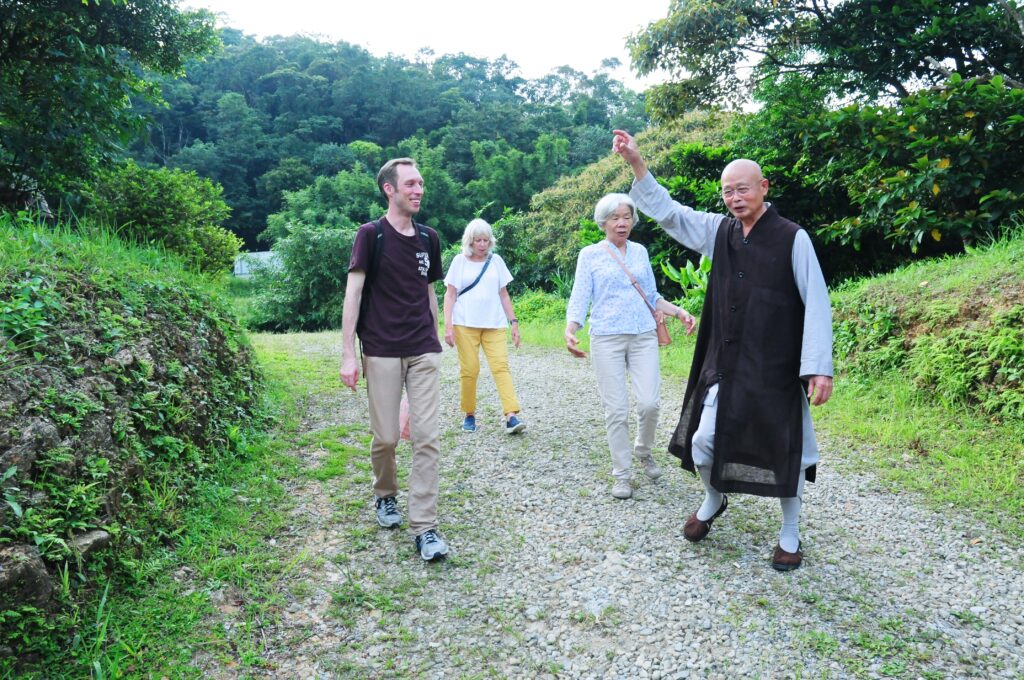 On the ride back to my mom’s hotel, venerable Zhuang Xing said to me, “Haoran, you need to take care of your mom in her old age.” He used the word 反哺 (fǎn bǔ), which literally refers to a crow feeding its parents after it has grown up, and is a metaphor for caring for one’s own parents in their old age. In Taiwan (and China as well) there is a sense of duty that many people feel towards their parents. When they first start to work, people will give a portion of the money they earn to their parents. It is a way to pay back the kindness shown by the parents in raising their children.

Once, when I met venerable Zhuang Xing over a year later at Shuangxi Temple, he said, “Your mother is very cheerful, tell her to come back sometime.”

To the southeast of Taipei lies Yilan county. This rural area is home to some beautiful natural scenery, including Guishan Dao (Turtle Island). A few days after our day spent with the monks, my mom and I traveled to Yilan and stayed a few nights at a bed and breakfast owned by one of my coworkers. While Yilan contains a few small towns like Yilan proper and Luodong, it is mostly rural. The countryside is dotted with rice farms and two and three story houses. Lanes criss-cross the countryside for miles. 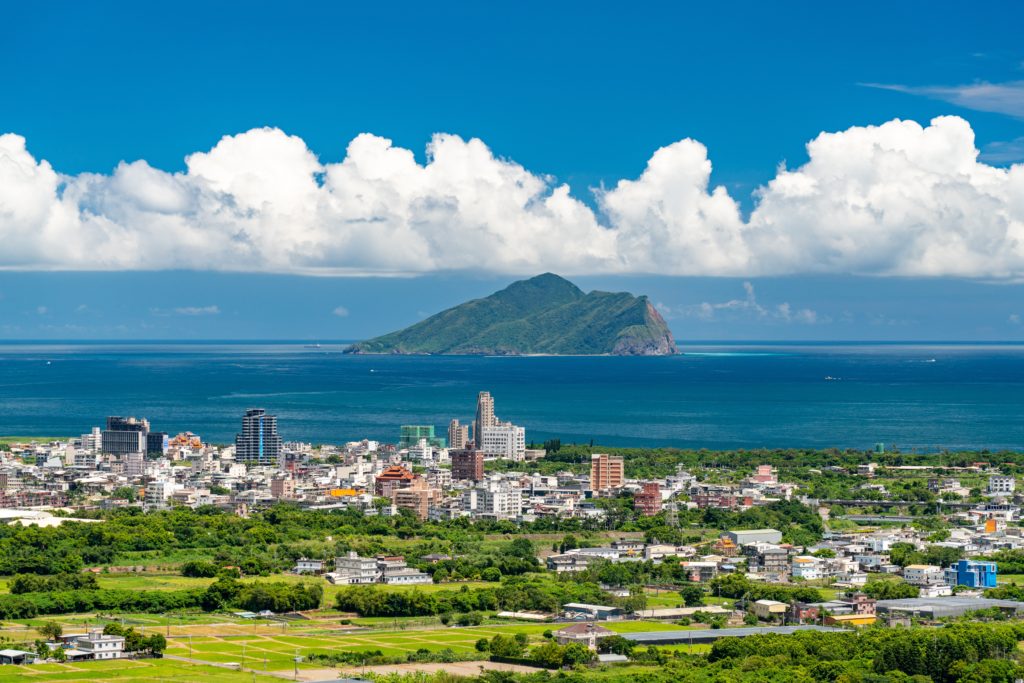 On our first day in Yilan we took a ferry to Turtle Island, a few miles off the coast. The island’s name comes from its shape. One end of the island is home to underwater hot springs, so all of the ocean water here is bright cerulean blue. The island once had a military base on it, but now all that is left of it are its abandoned buildings. 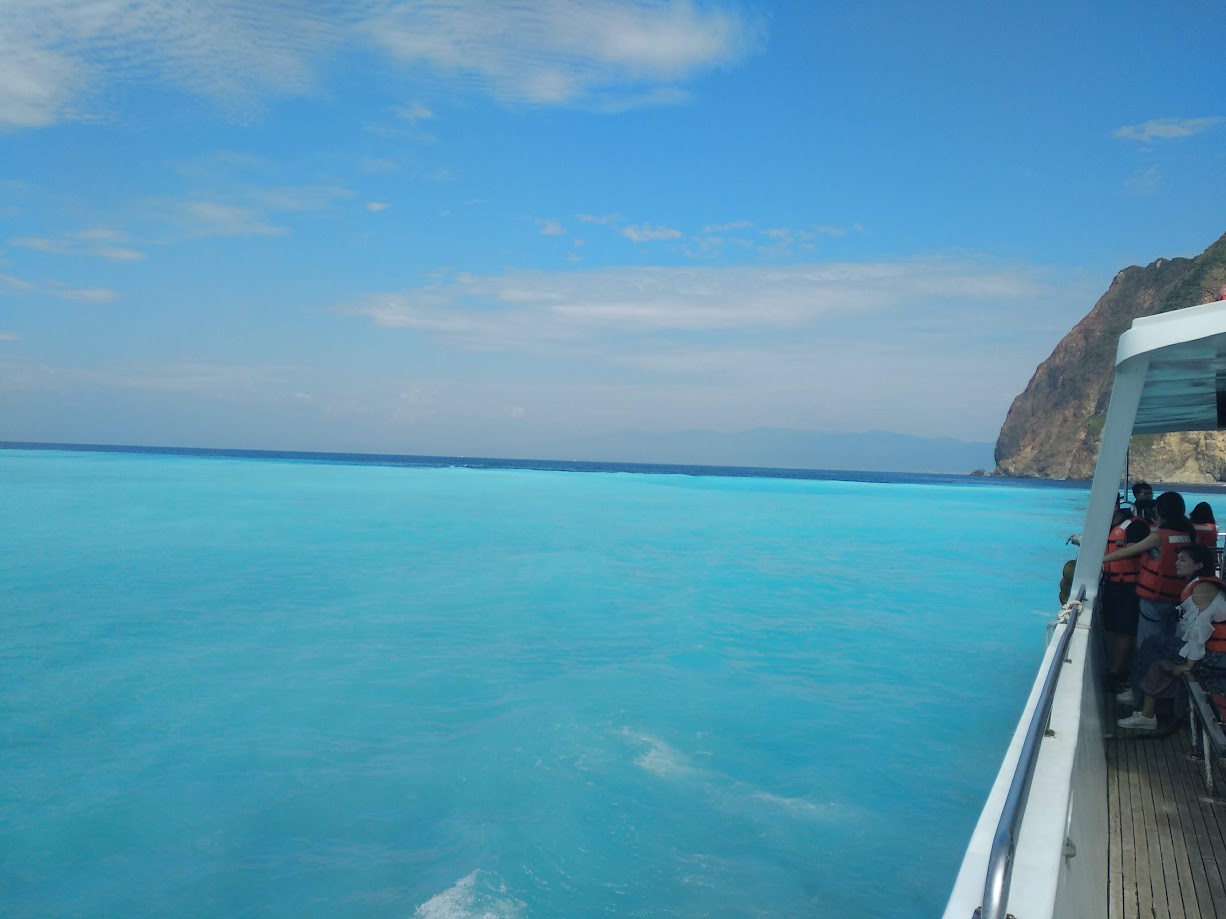 Next to the port with ferries bound for Turtle island is Lanyang Museum. The museum houses exhibits on the local culture, history, and landscape. The shape of the museum is very unique and somewhat resembles Turtle Island. 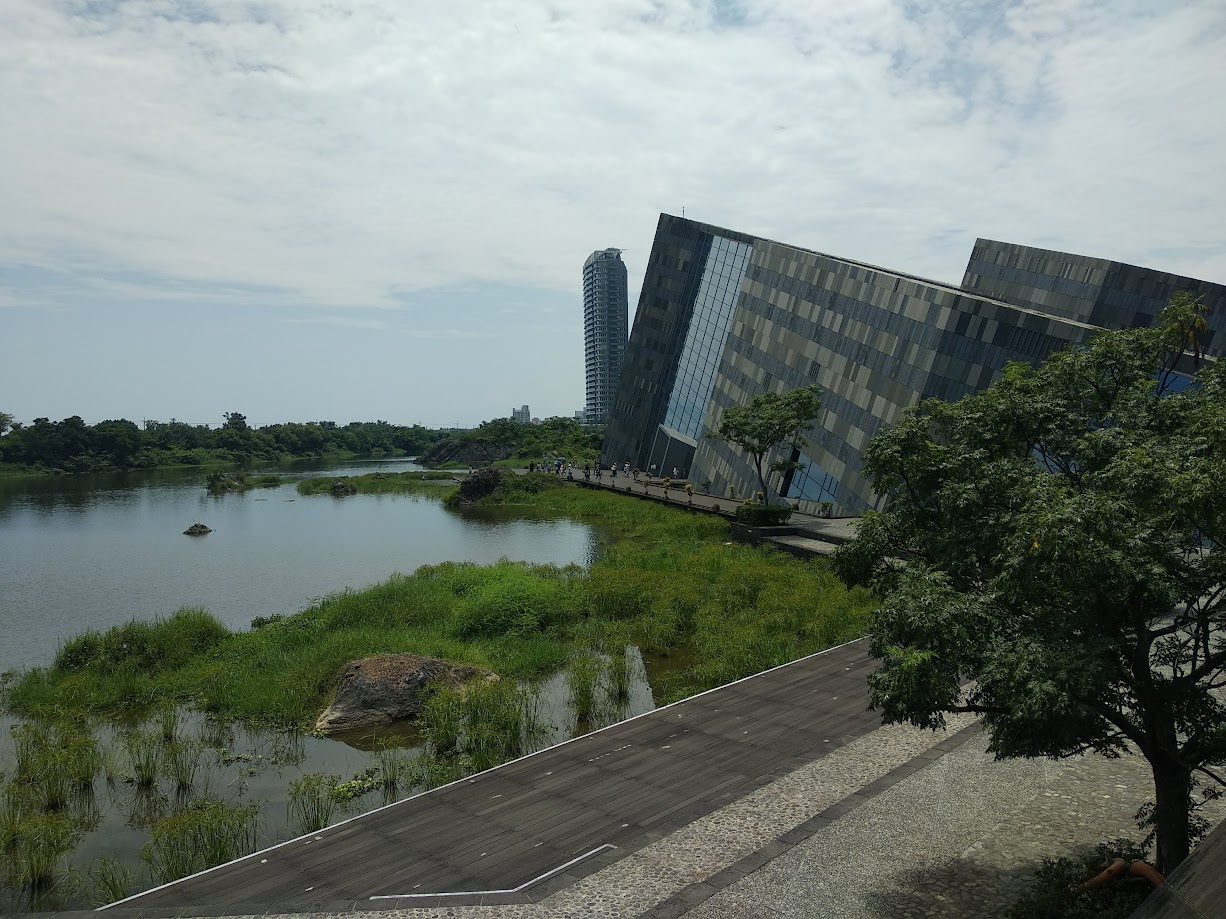 Yilan is also home to a rare type of cold spring that is only found in a few places around the world. I am not sure how these cold springs differ from regular springs, besides the fact that an entire bath house complex is set up on top of them. At the bath house there are individual rooms with cold pools of water. After a dip in these springs we found ourselves wondering why we didn’t go to normal hot springs found all over Taiwan instead. 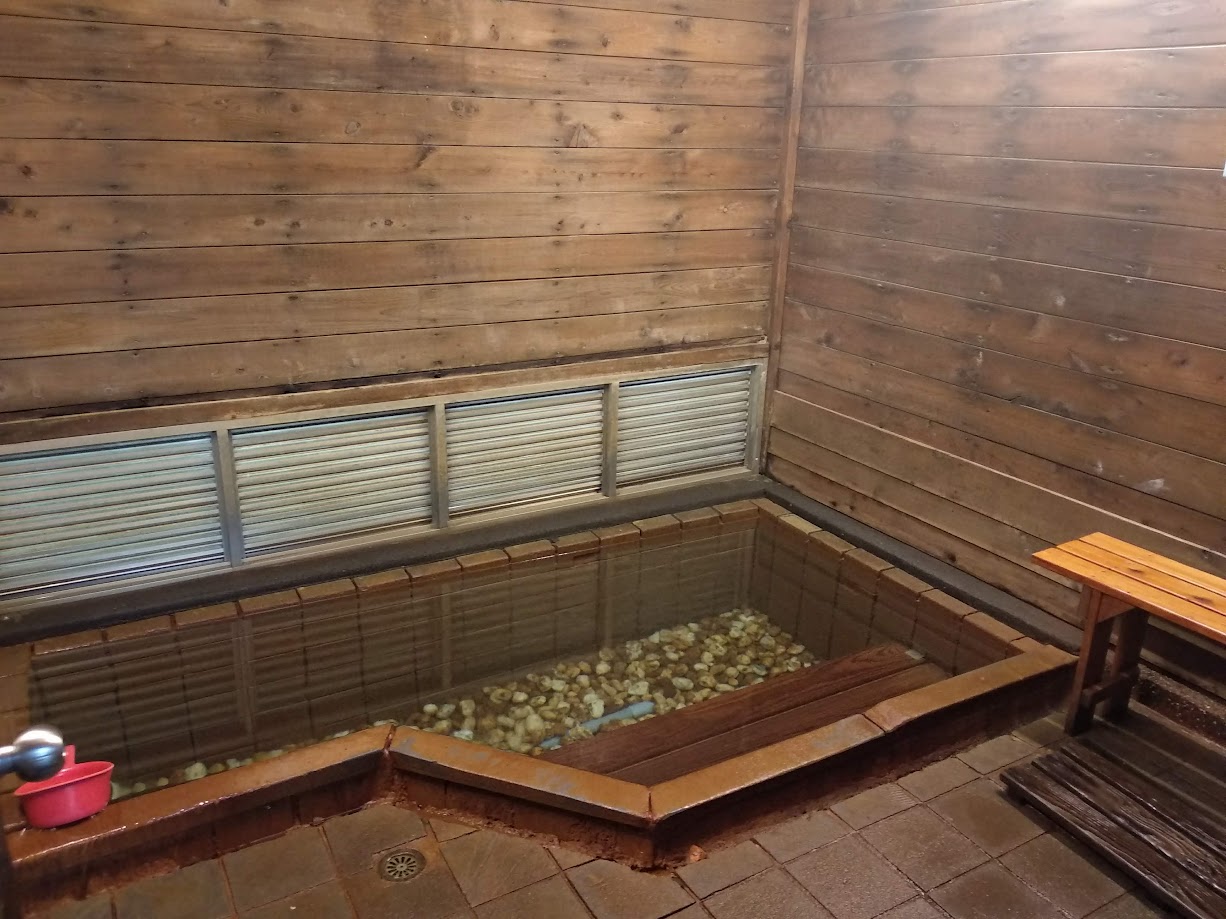 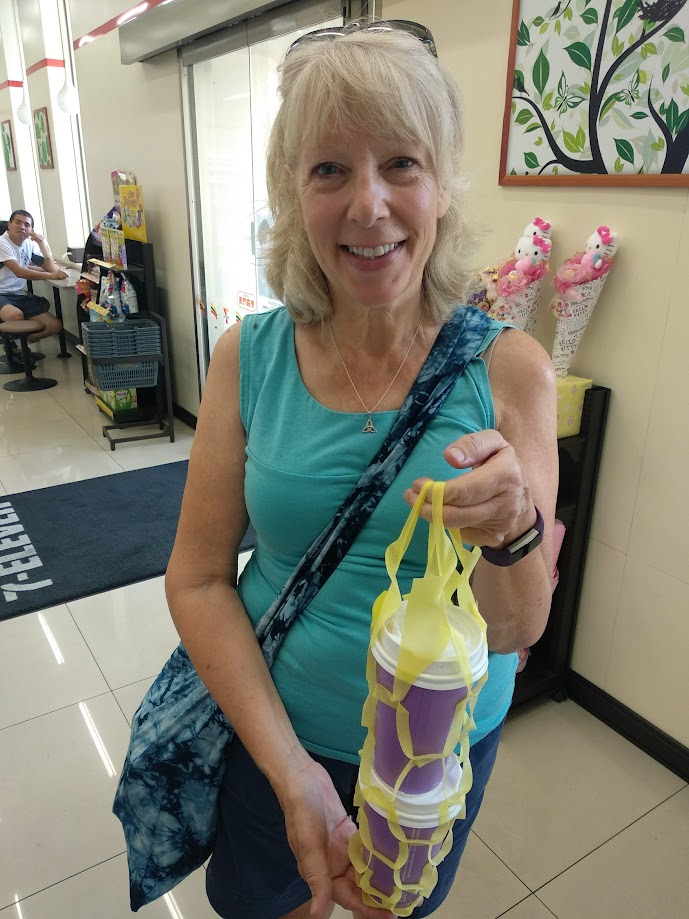 After two days in Yilan, we took the train south to Hualian county. If you read my previous post about Hualian, you know that I am a big fan. If I ever bought a house in Taiwan, it would be in Hualian. With mountains to the west and sea to the east it is absolutely gorgeous. It’s not big or bustling like Taipei, but it’s also not in the middle of nowhere.

A family friend back in Minnesota has a Taiwanese friend, Bob, who had opened a bed and breakfast along the coast in Hualian, and my mom and I planned to stay there for two nights while we explored the beauty and culture of Hualian. After arriving at Hualian station, we grabbed a taxi and headed south to the BnB. 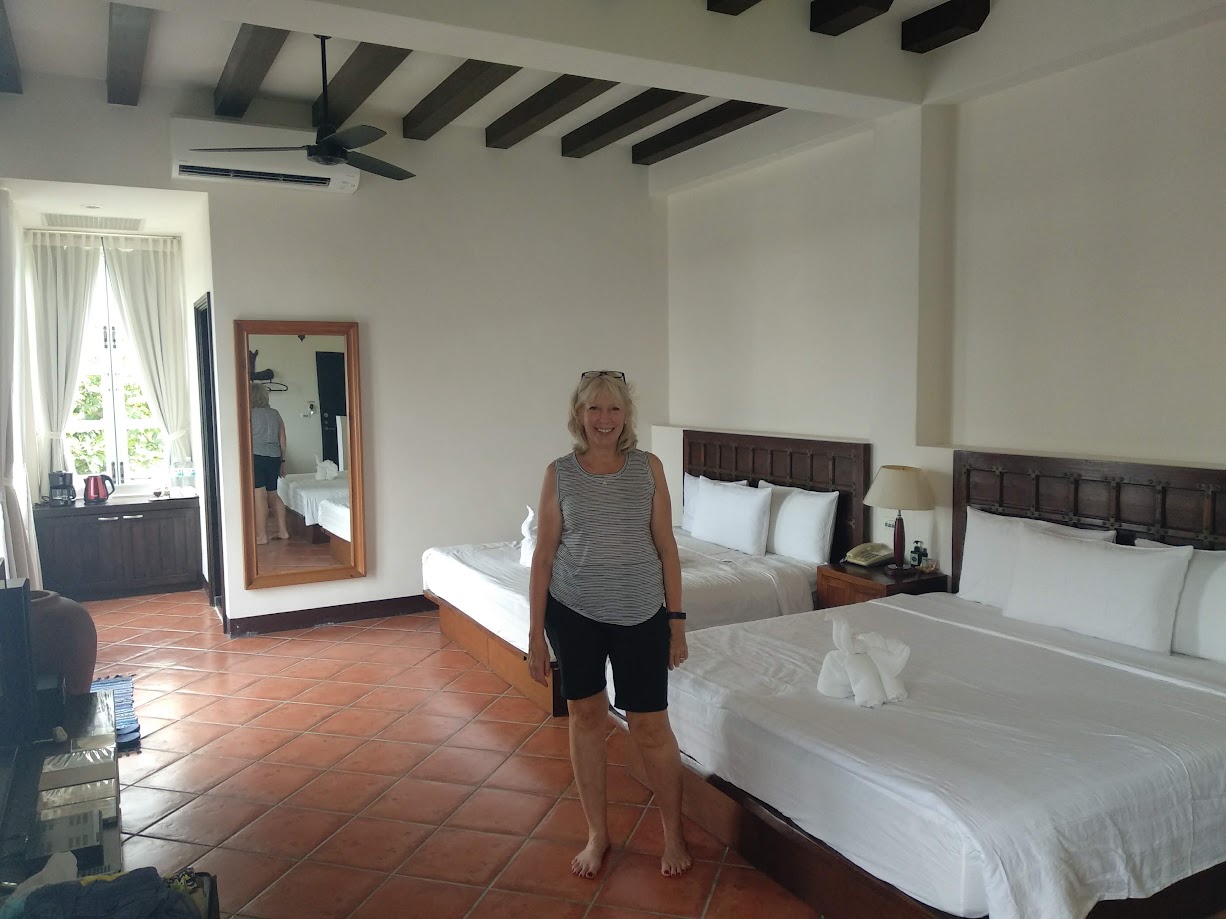 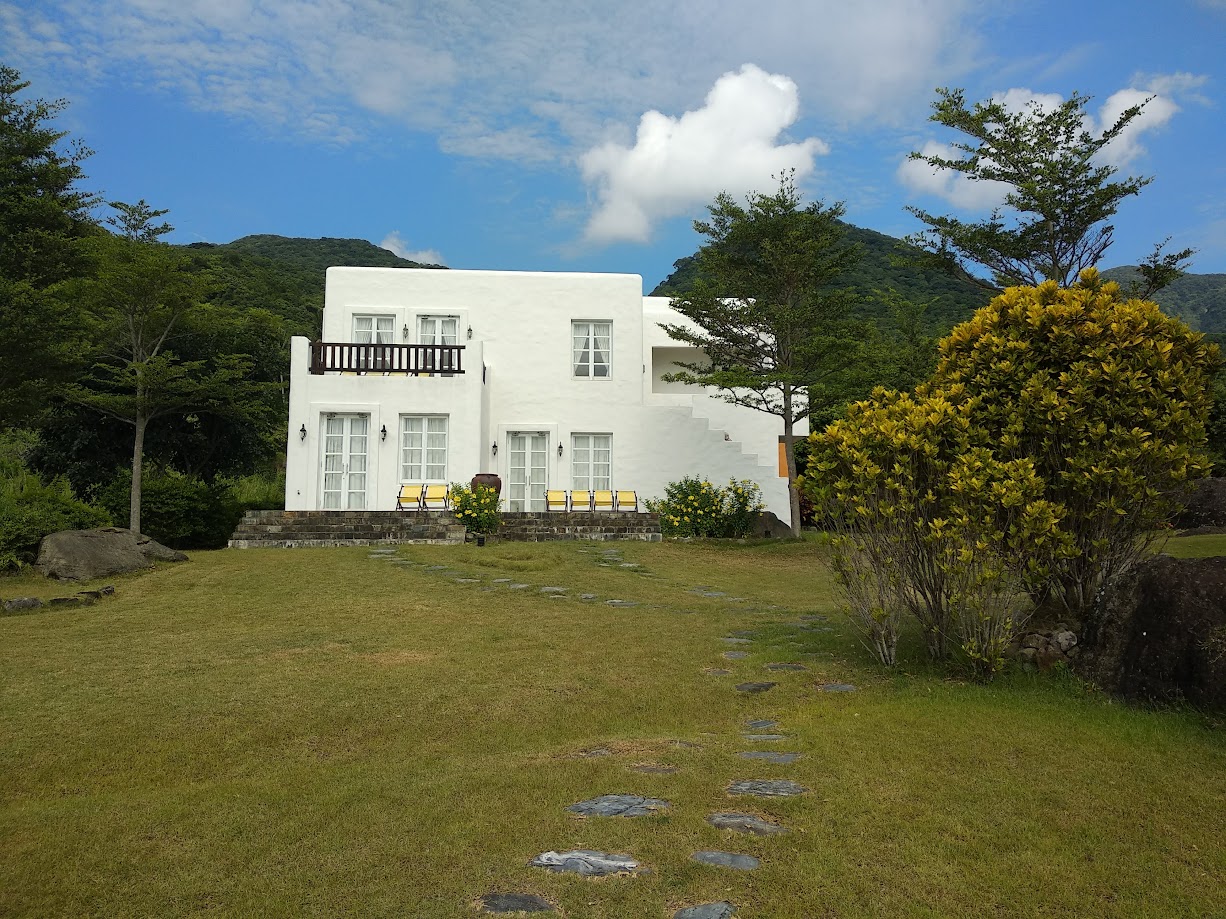 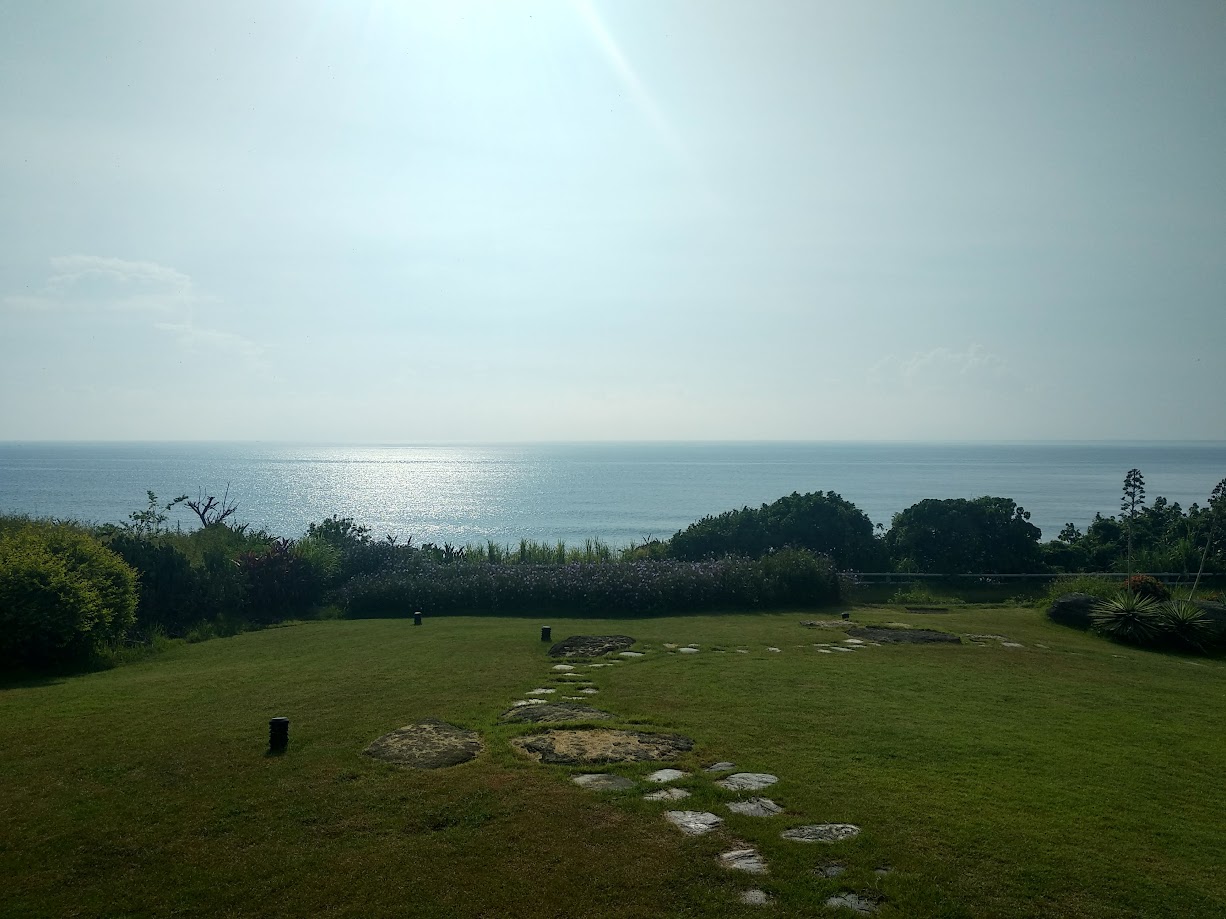 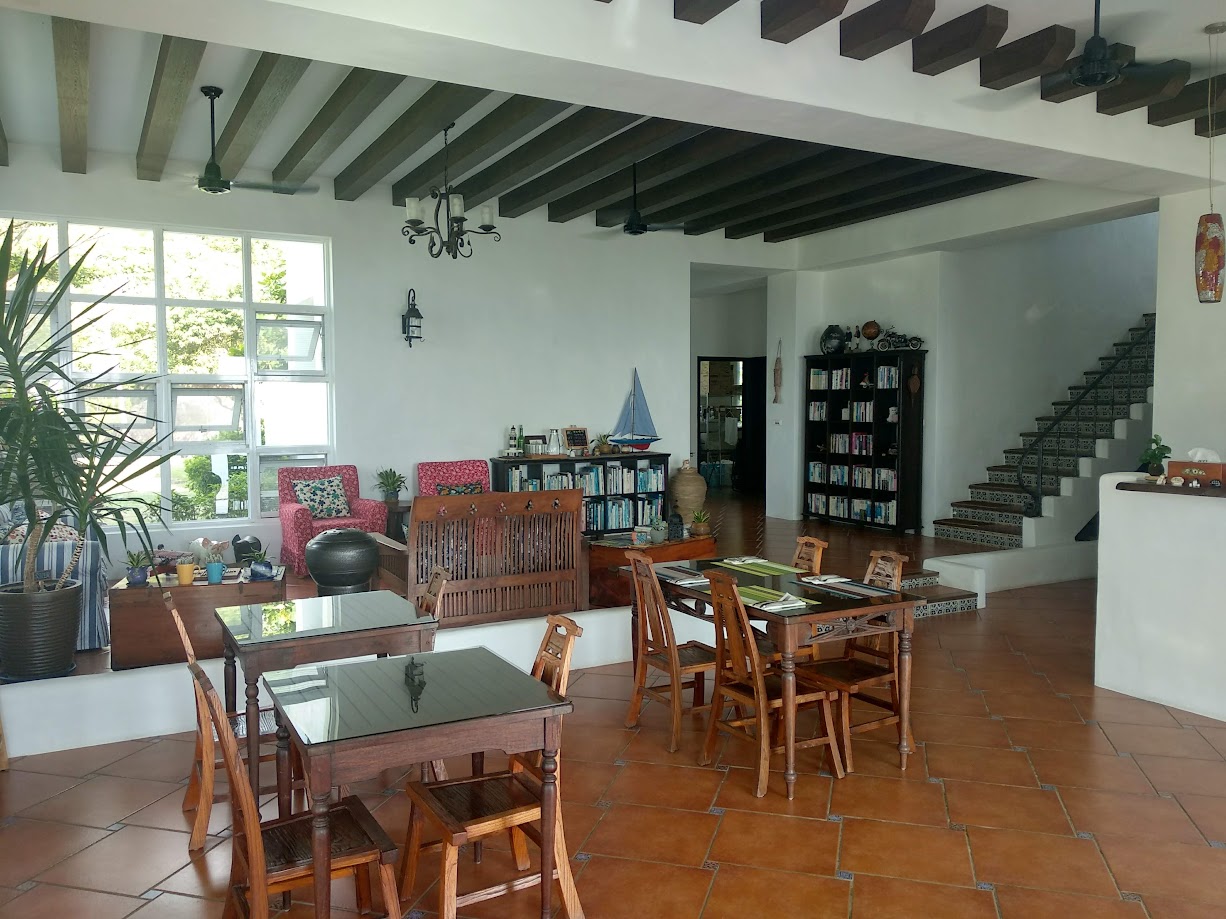 Upon arrival we were greeted by Bob and taken on a quick tour of the area. The BnB was located a few dozen miles south of Hualian city, almost to Taitung county. Our first stop was a small Catholic church. The congregation was nearly all indigenous people wearing bright pink traditional clothing. After mass we took pictures with them outside and they invited us to join in a celebration they were about to have. We had to decline to continue our tour but we were delighted by their inclusivity. 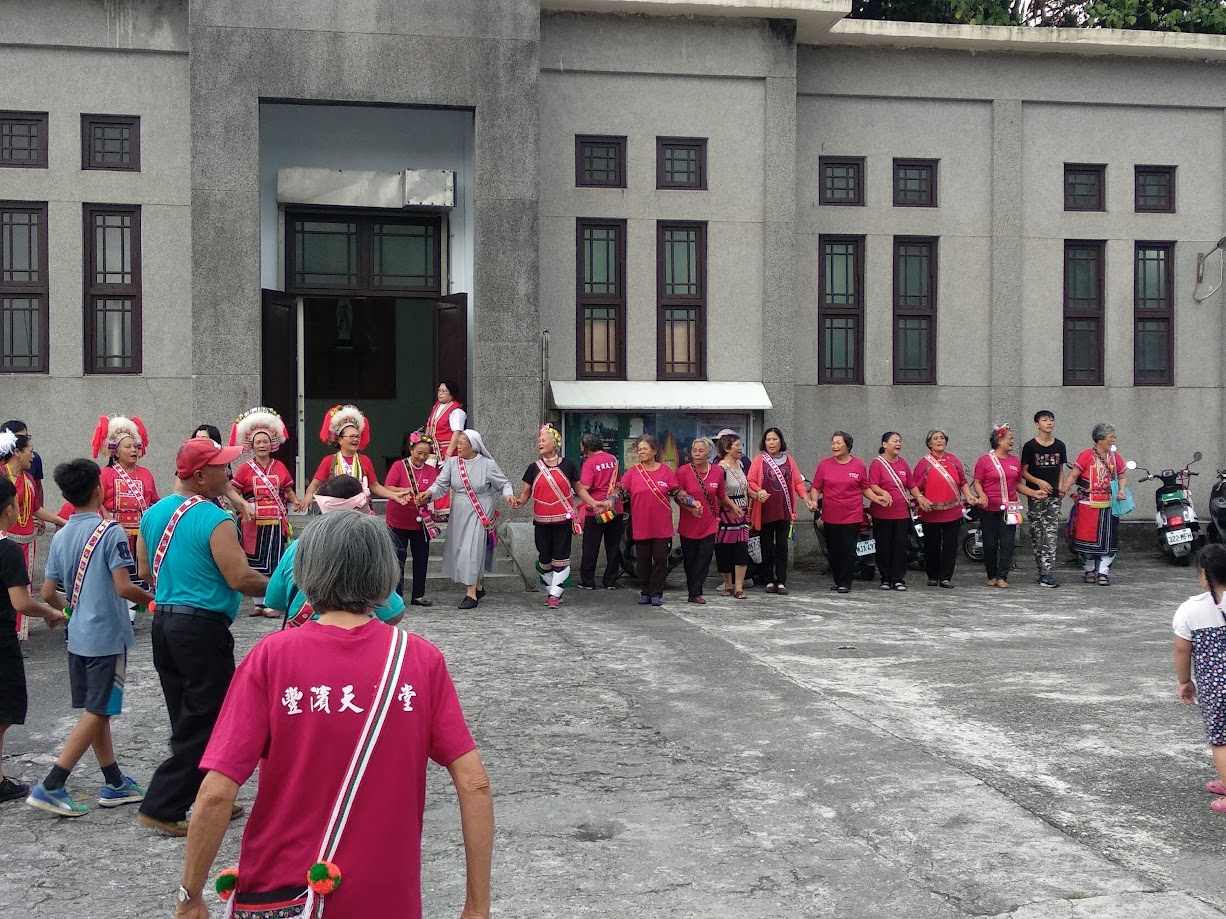 We next visited the rocky outcrop of Shitiping, which is known for its rock formations jutting out into the ocean. 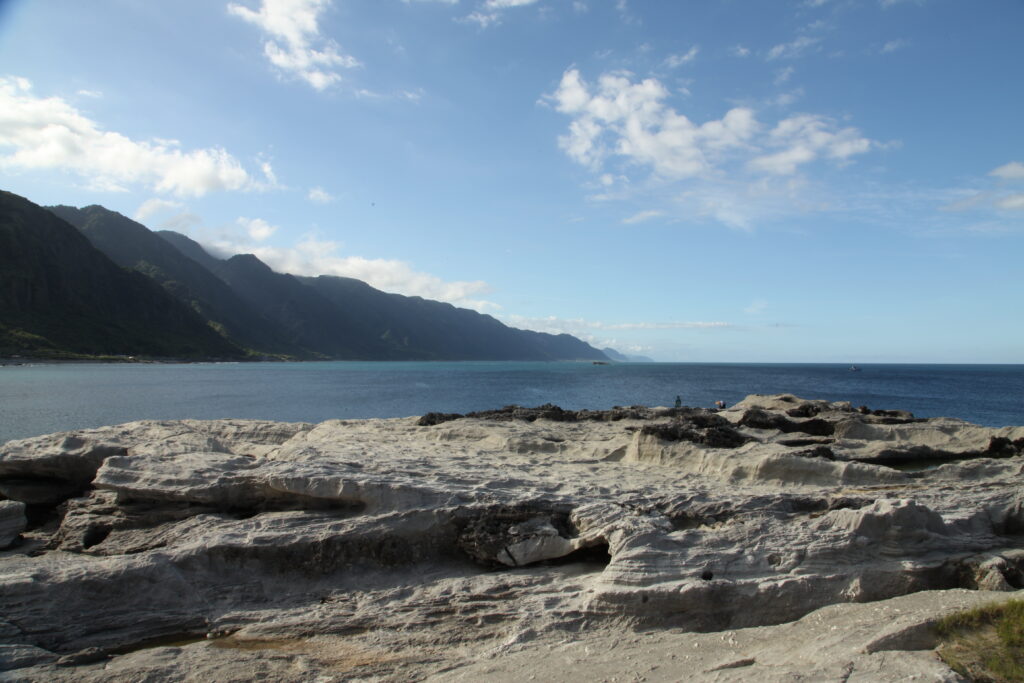 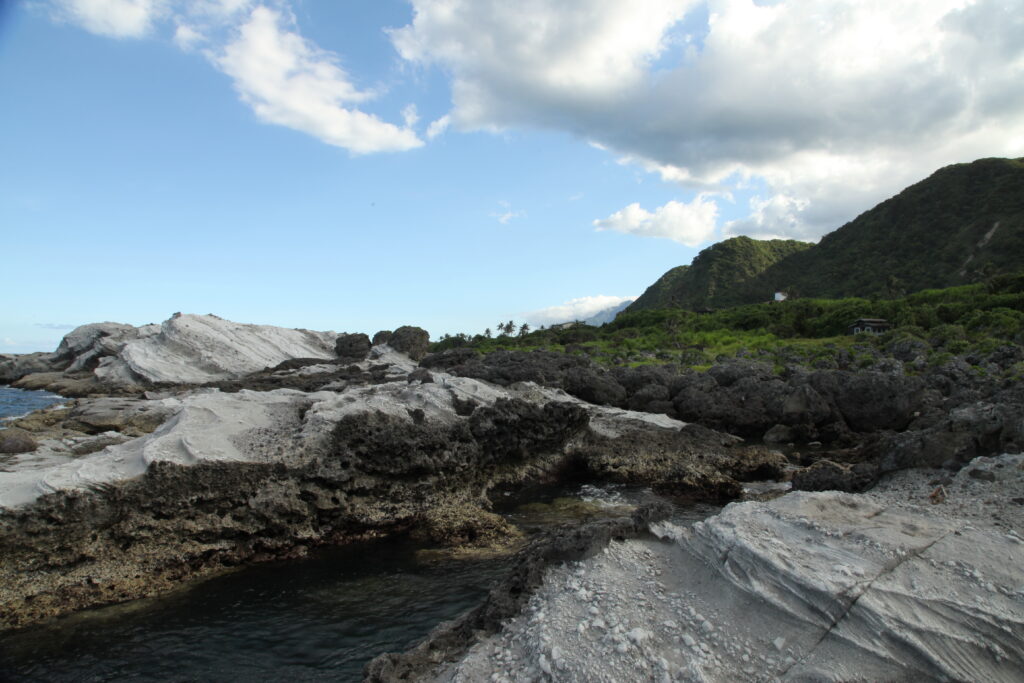 The next day, we rented a taxi to take us to a few food stalls and restaurants around Hualian city and then to Taroko gorge, Hualian’s (and maybe even Taiwan’s) premier tourist destination. I wanted to show my mom all of the best spots in just a couple of days, so we had to move fast. On the way to the gorge, we tried scallion pancakes from a famous vendor and dumpling soup from a famous restaurant. Both were delicious.

Taroko National Park is 360 square miles in size and includes 27 peaks over 3,000 meters. There is a single road that runs through the gorge. It snakes its way through tunnels and along cliffs all the way to Hehuan mountain, one of Taiwan’s highest mountains. Our trusty driver brought us to several picturesque spots within a thirty minute drive of the entrance of the gorge. We did a little hiking and marveled at the scenery. The road and bridges that snaked through the gorge were a marvel of engineering. 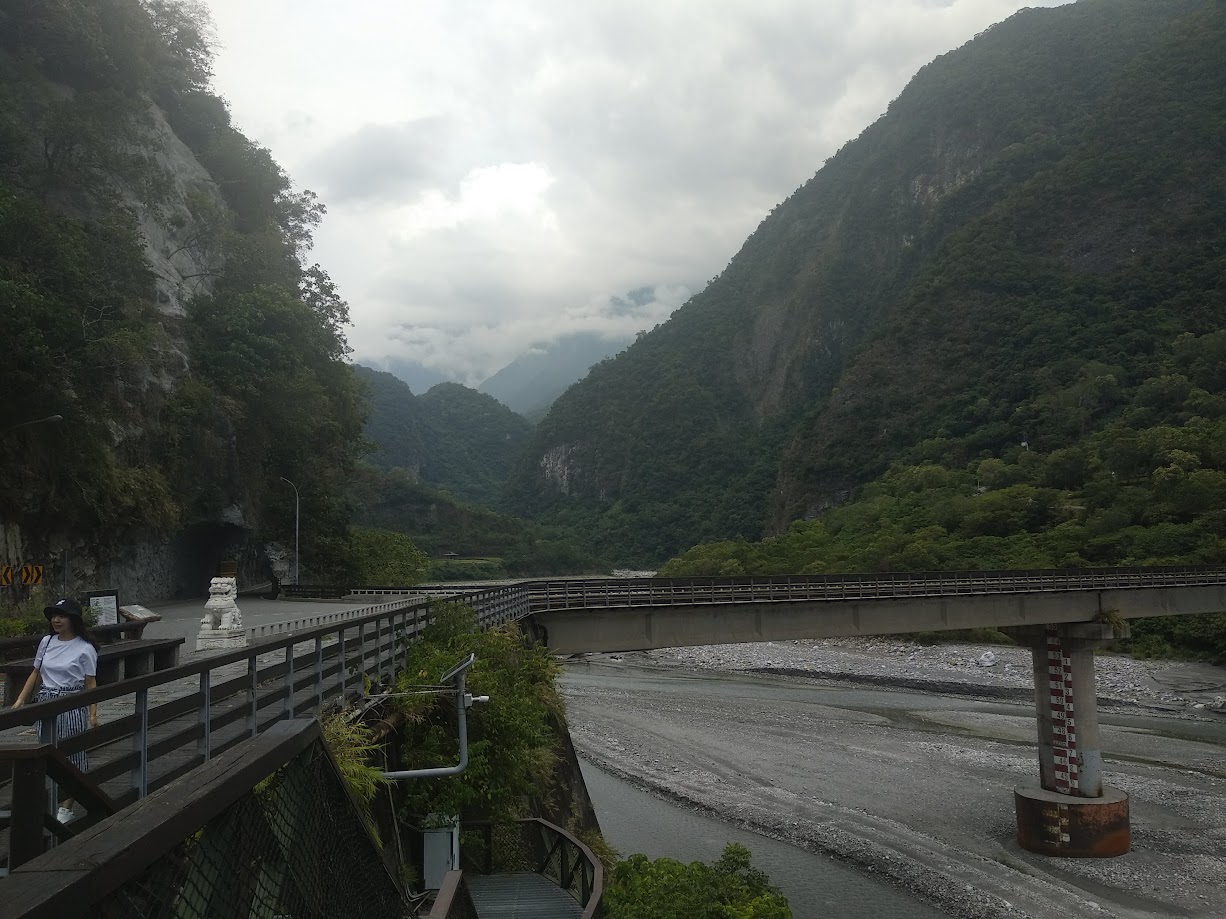 As it turns out, the monks of Hwadzan were in Yilan and Hualian the same four days that my mom and I were. They were holding some Thrice Yearning Ceremonies. For our last stop of the day, my mom and I went to the stadium in Hualian where the ceremony was being held.

Throughout the ceremony, besides chanting there is also a lot of walking around the venue, bowing, and lighting incense by the monks leading the ceremony. Hwadzan’s photographer told me where to stand in order to have a word with venerable Wu Dao mid-ceremony. When he came around to where I was standing I quickly asked him if my mom and I could meet with him. He smiled and agreed. After this portion of the ceremony, it was time for dinner and we accompanied him and other monks and lay practitioners to a conference room where vegetarian meals were served.

My mom and I sat at the head of the table near venerable Wu Dao. He and my mom chatted and I acted as interpreter. “Everyone loves a good bakery,” my mom told him at some point. I translated this as 現在大家都愛吃麵包 (Now everyone loves bread)! Venerable Wu Dao got a kick out of this and had a good laugh.

After we had supped, it was time for the third and final portion of the ceremony to commence. Before beginning, venerable Wu Dao said a few words to the audience and invited me to interpret in English for everyone, including my mom. It was a thrilling experience that lasted probably five to ten minutes. Afterwards I was on cloud nine, it felt amazing.

With that, we bid farewell to venerable Wu Dao and the rest of Hwadzan. Venerable Wu Dao accompanied us all the way back to our taxi who was waiting in the parking lot. Once again I was struck by the kindness and charisma of this man. My mom felt it too.

For this post, I recently asked my mom what her impressions were from this trip to Taiwan four years ago. The first thing she recalled was the calm, welcoming, gentle spirit of the monks we met. Venerable Wu Dao was so centered, you could feel this when around him. Venerable Zhuang Yan was always caring for Wu Dao like passing him food or giving and taking things for him. Everywhere we went people were always differential to venerable Wu Dao. At the temples we visited the staff and monks were always there to greet venerable Wu Dao and our party. At the restaurant, everything was arranged for us when we arrived and the staff expected us. People just wanted to do things for venerable Wu Dao.