My Experience of Buddhism in Fuzhou, China

Right after the UNESCO peace conference, since I was applying to work at Hwadzan, my would-be boss Mark thought it would be a good idea for my associate Big Bear and I to follow Venerable Wu Dao and the rest of Hwadzan to Fuzhou, China for a couple of weeks where there was to be a huge, four-day Fujian-Taiwan Cultural Exchange Thrice Yearning Ceremony and Ancestral Remembrance Ceremony, followed by a week and a half of traditional Chinese culture classes given by Venerable Wu Dao. Big Bear and I would gather footage and photos of the occasion for future productions.

Fuzhou was founded in 202 BC. It is the capital of Fujian province and sits about 100 miles west of Taipei across the Taiwan Strait. Many overseas Chinese in the United States are from Fuzhou. In my current work as a medical interpreter in the US, one out of every three or four patients I meet is from Fuzhou.

During our stay in Fuzhou, everyone from Hwadzan stayed at the Amitabha Hotel, a high-end hotel run by one of Venerable Wu Dao’s followers. It is one of the nicest hotels I have ever stayed in. More on this later.

Venerable Wu Dao specializes in teaching traditional Chinese culture (Buddhism, Confucianism, Taoism) abroad and regularly travels around the world to hold Thrice Yearning and Ancestral Remembrance ceremonies, and to give talks. A contingent from Hwadzan travels with him to help prepare and host the ceremonies, and broadcast the events live online. It was part of one such team that I found myself at said ceremonies.

The four days of ceremonies were held at Ten Thousand Buddha Temple in Fuzhou. The temple was rebuilt in 1999 using Song dynasty architecture. Hundreds of Buddhist followers came from all over China to attend the event. Like with the first Thrice Yearning and Ancestral Remembrance ceremonies I had attended, the ceremonies were very solemn. The Thrice Yearning ceremonies lasted from late morning until eight or nine o’clock in the evening for three days in a row. Vegetarian lunch and dinner were served during breaks. Thanks to the guidance of Venerable Wu Dao and other venerables, as well as the hard work of Hwadzan employees and volunteers, the ceremonies were a success. Though I had previously lived in China for six years, this was the first time I had ever witnessed a religious event on such a scale. It was great to see. 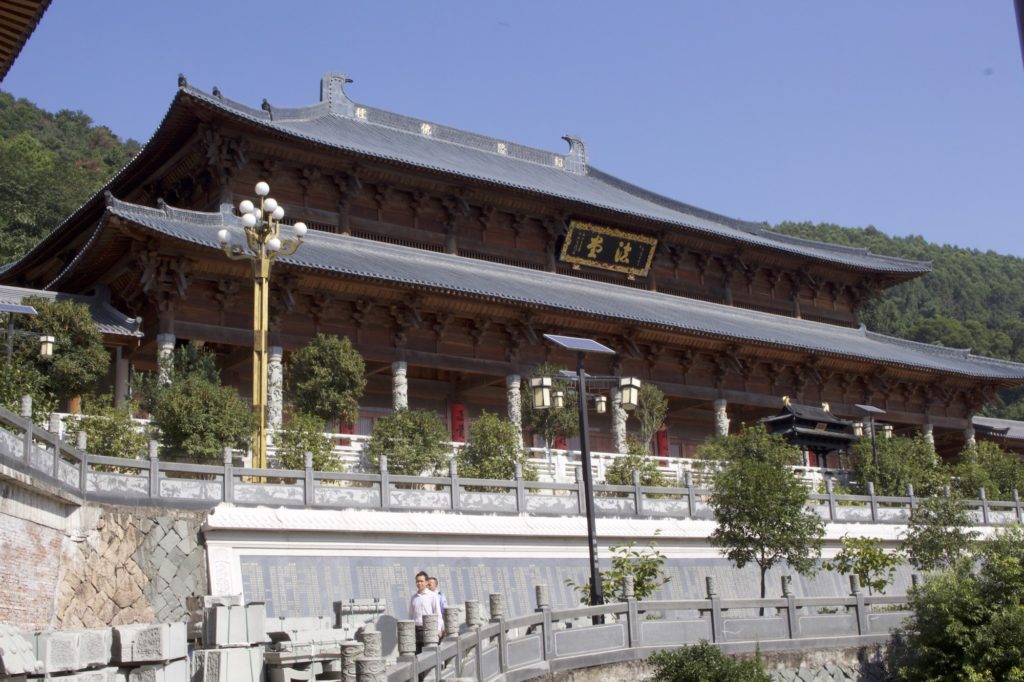 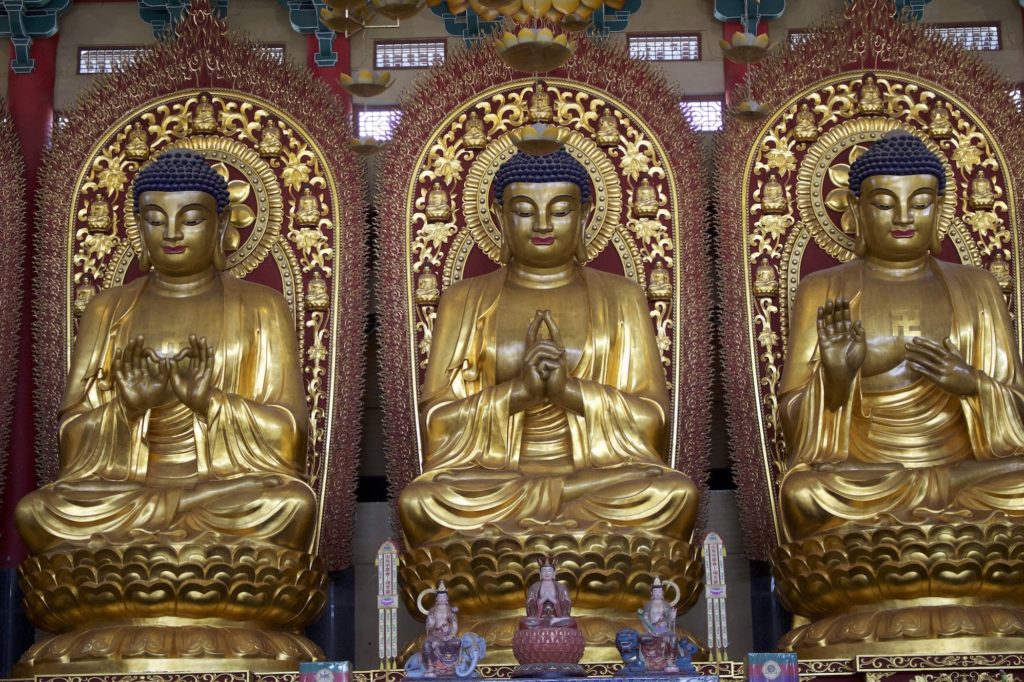 Once in a while I enjoy camping in the traditional sense, but the kind of camp where you stay in a luxurious hotel with warm and attentive service is more my style. After the four days of ceremonies, a study camp was held for the employees of Hwadzan in the Amitabha Hotel. All of its staff are trained in the traditional Chinese value of 禮 (lǐ), propriety, and thus all of the staff at the hotel were incredibly polite and thoughtful.

The main book used in the class was called Treatise on Response and Retribution (太上感應篇). The opening verse states, “The Most Exalted One says: Misfortune and blessings do not come without reason, we bring them upon ourselves.” (太上曰：禍福無門 惟人自召) The book explains the universal law of causality (karma): good deeds beget blessings, while bad deeds bring misfortune on oneself. At first I was surprised that Buddhists were studying a Taoist text, but I then later learned that the teachings of Taoism are quite compatible with Buddhism. In fact a syncretism of Buddhism, Taoism, and Confucianism is what the Buddhists at Hwadzan practice. Pure Land Patriarch Master Yin Guang (1861–1940) promoted Treatise on Response and Retribution as much as he did other Buddhist texts. Recently, Venerable Wu Dao initiated a video series called “Along with the Gods” (與神同行) which explains the law of causality in more detail. Below, the video contains English subtitles and is quite well produced.

Today when we see people living morally corrupt lives who are rich and have a good life, and people who are good, but are poor and miserable, we doubt the law of causality. The reason for this is that in previous lives those who are rich and powerful cultivated this good fortune, but they will still have to suffer from their present bad deeds in the future. Virtue has its reward, evil has its retribution. It is not that there is no retribution, only that the time is not ripe. (善有善報，惡有惡報。不是不報，時辰未到).

Classes lasted seven and a half hours each day. I was amazed at the energy that Venerable Wu Dao exhibited. After hosting four days of ceremonies he went straight into teaching all day for another ten days or so, but he seemed full of vitality the entire time. He always had a smile on his face and he peppered his classes with many good jokes.

After class each day, there were small group discussions where people shared what they had learned in class or some personal experiences. I liked these heart to heart discussions. 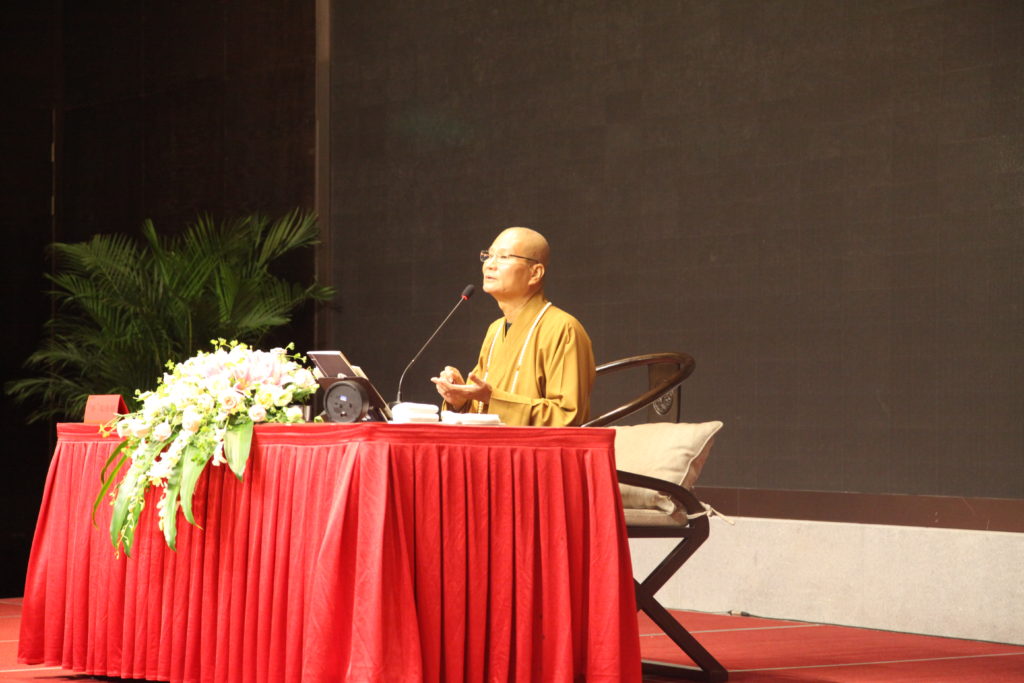 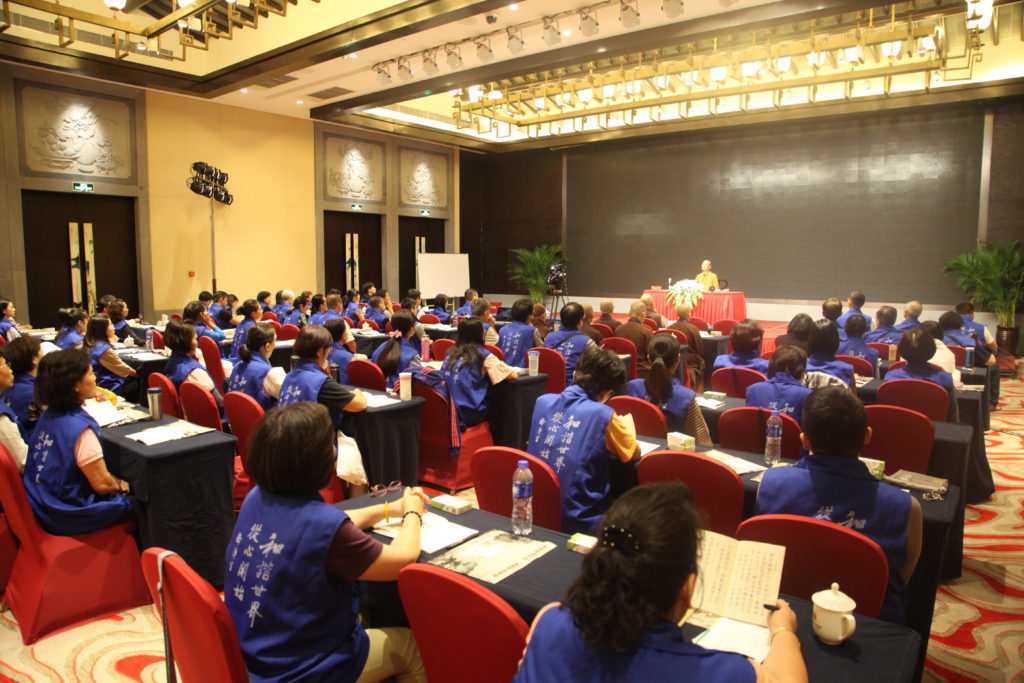 On the weekend there was an employee trip around Fuzhou. Our first stop was Yongquan Temple. The Buddhist temple has three treasures: intricately carved towers, Buddhist relics, and scripture written in blood. Located on a mountain, the temple was scenic and tranquil. Our second stop was Three Lanes and Seven Alleys historic district. The area is a maze of old streets and shops that throughout history was home to many prominent Chinese. One such person was Lin Zexu, who is best known for opposing the British sale of opium to China in the First Opium War (1839–1842). His former residence is now a museum dedicated to his life, which we visited. 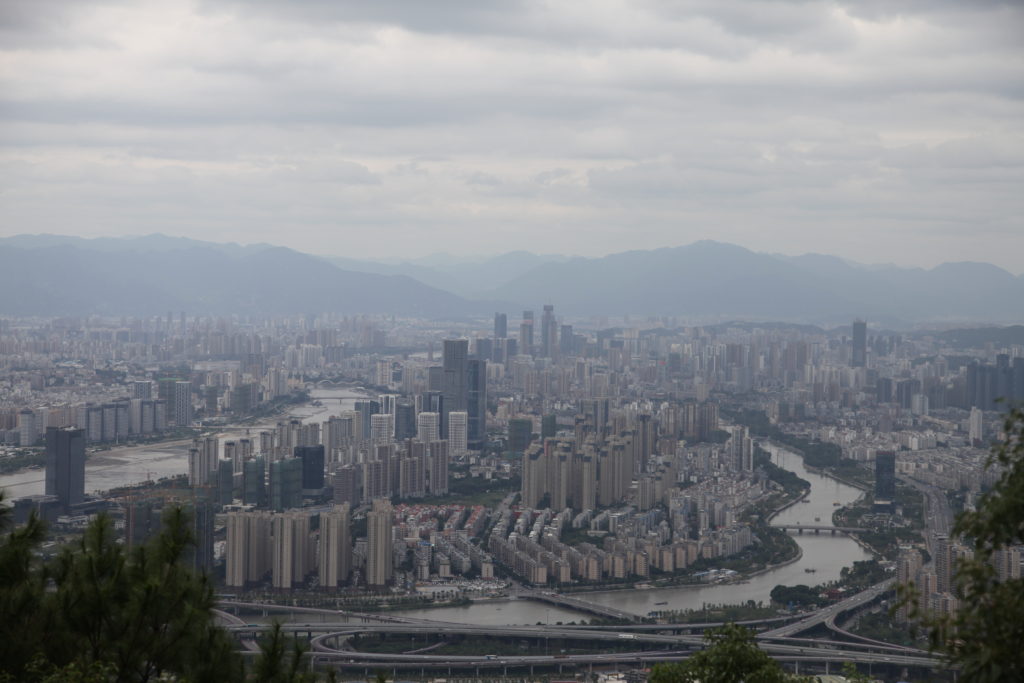 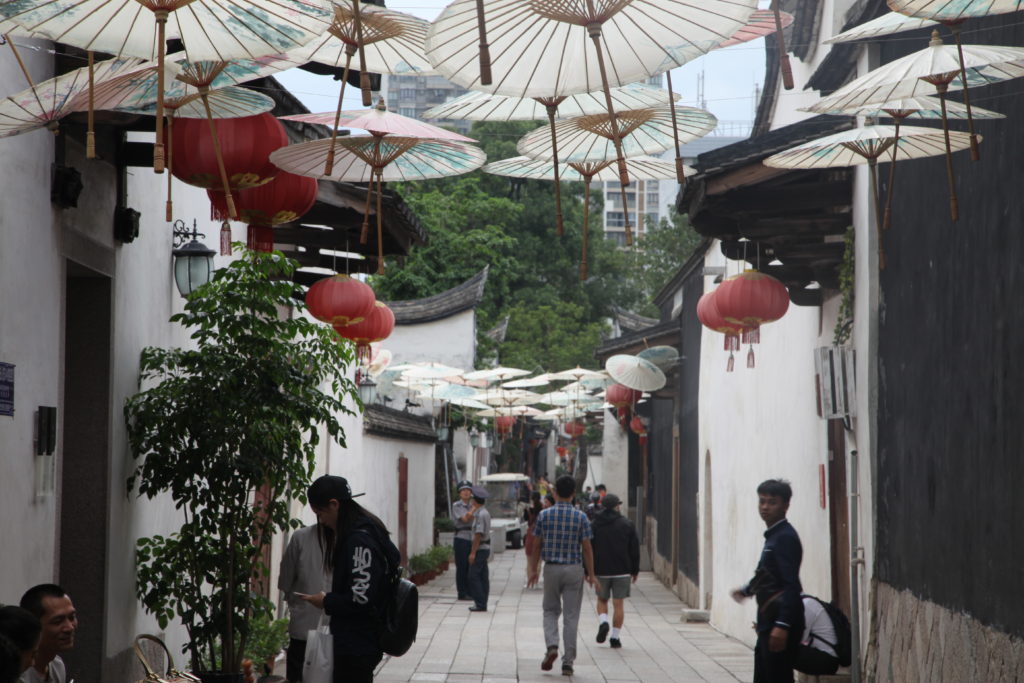 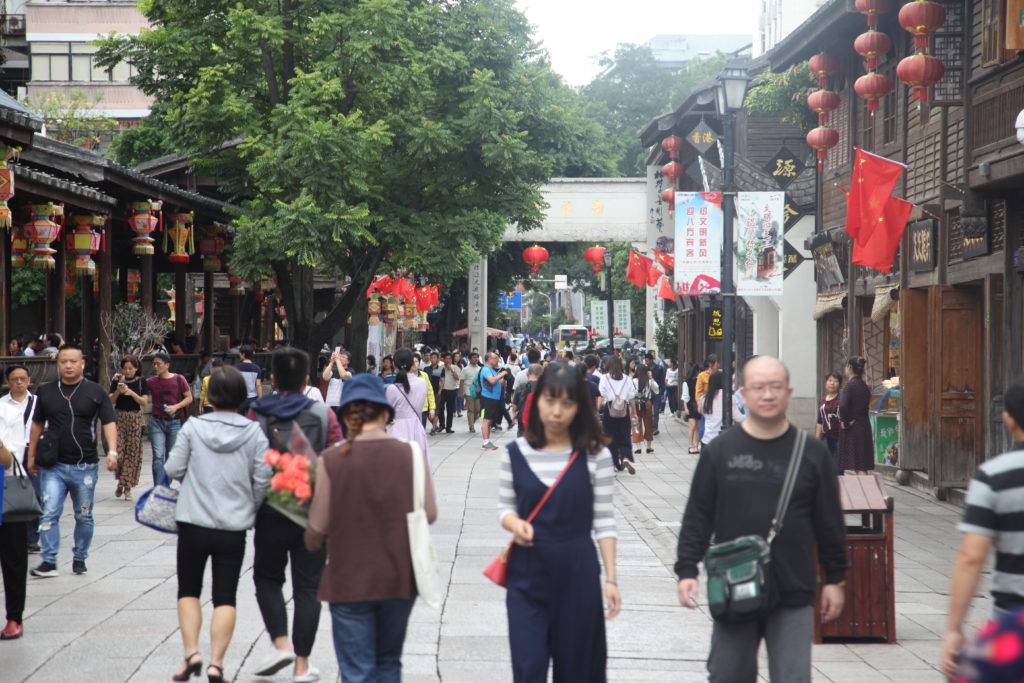 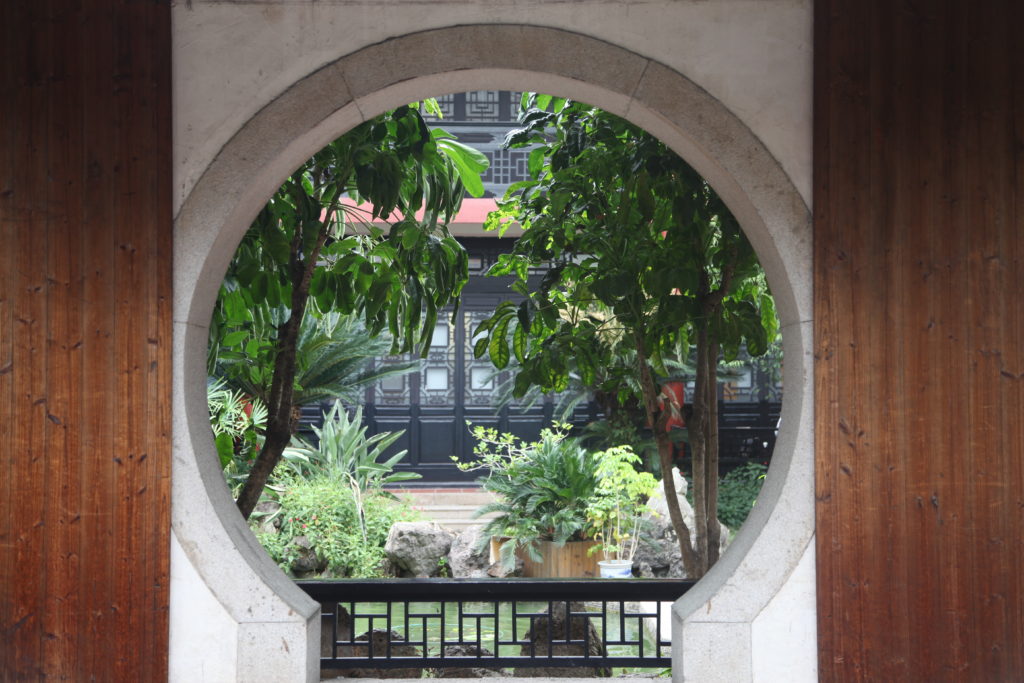 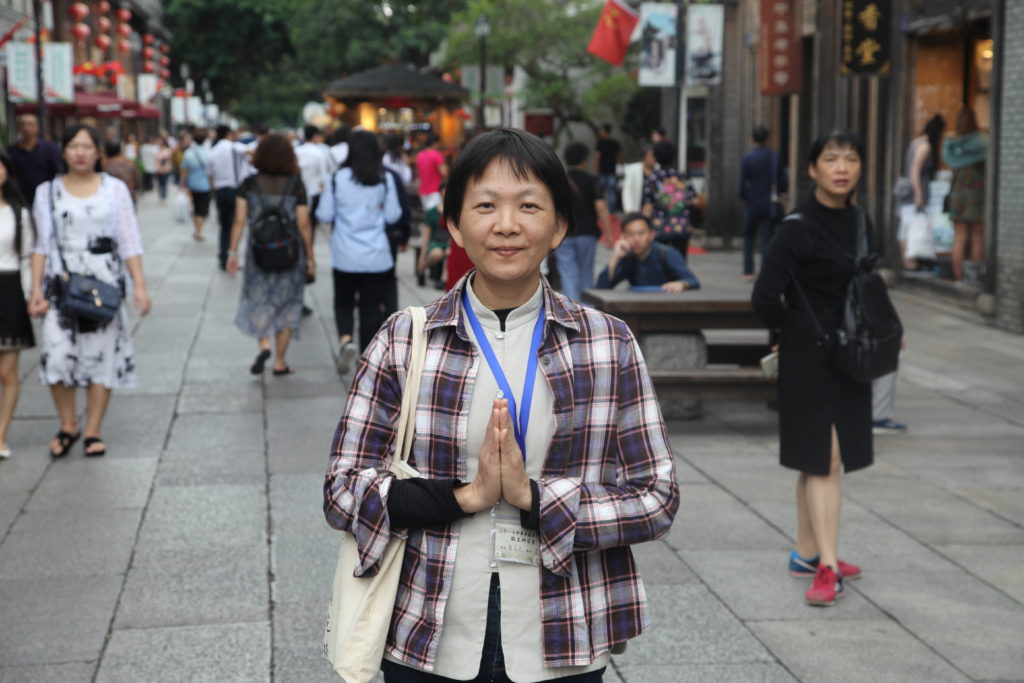 After the second week of classes, the employees of Hwadzan once again piled into a few buses and visited Chongsheng Temple in the countryside around Fuzhou. We were greeted by a monk who may have been the abbot of the temple, I wasn’t quite sure. He lead our company on a tour around the temple explaining to us the significance of various objects and statues. At one point he and Venerable Wu Dao sat and chatted at length. With everyone else gathered around the room, it reminded me of when there were great meetings between leaders of different groups like in Lord of the Rings.

On the ride back to Fuzhou, Big Bear and I had some conversation with a couple of Hwadzan employees similar in age to us. I was impressed that here were young, bright people who could have been making a lot of money at some big company in Taiwan, but had chosen to go more meaningful work of spreading traditional Chinese culture. 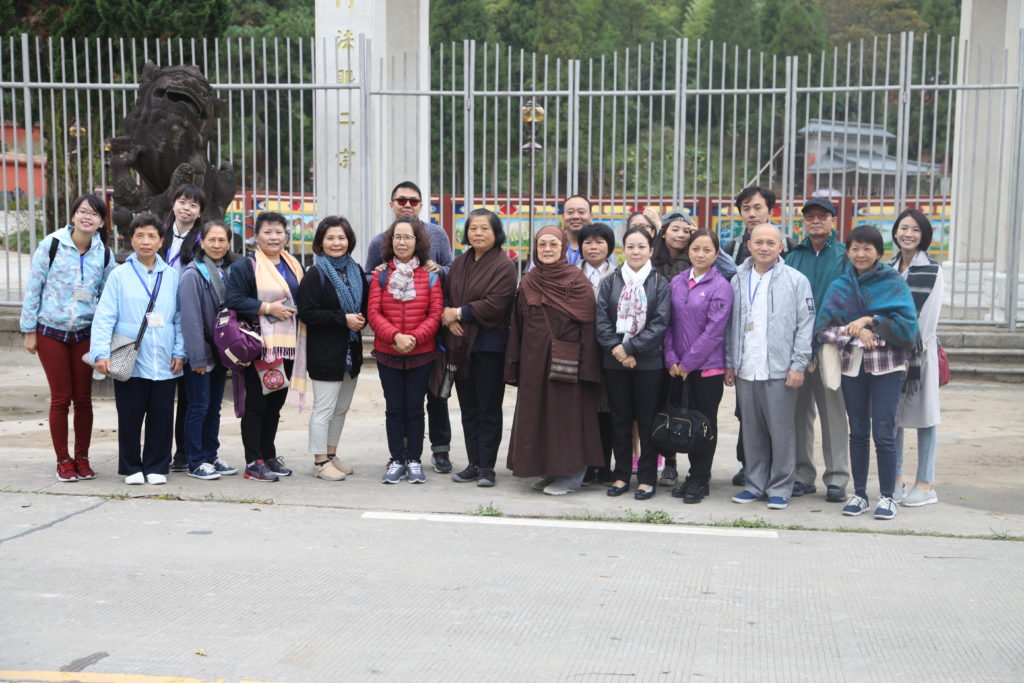 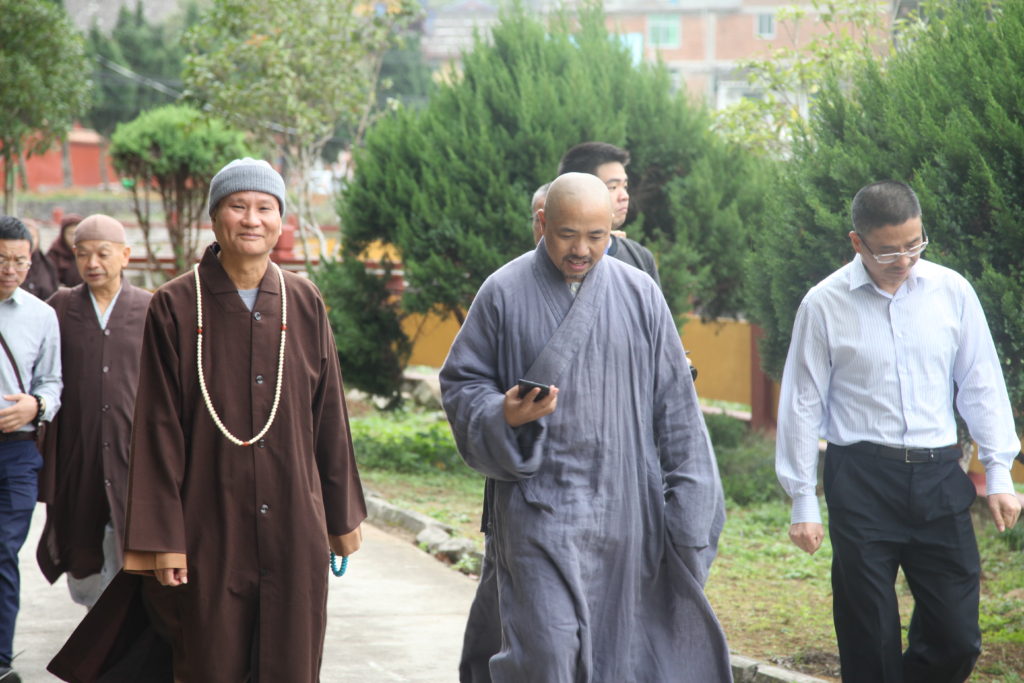 Venerable Wu Dao walking with the abbot of the temple 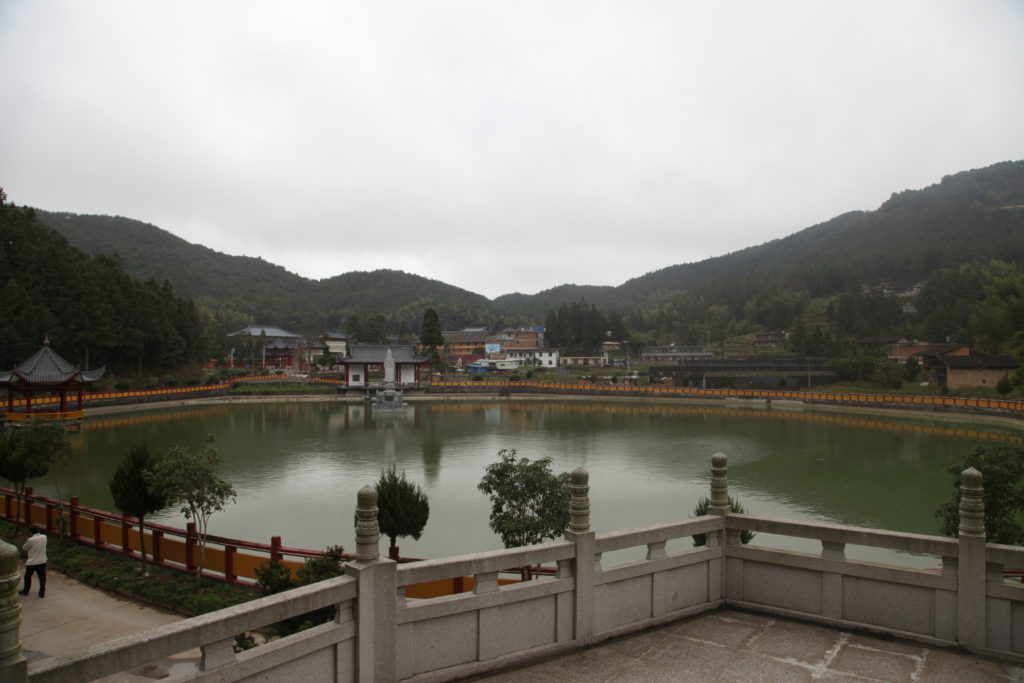 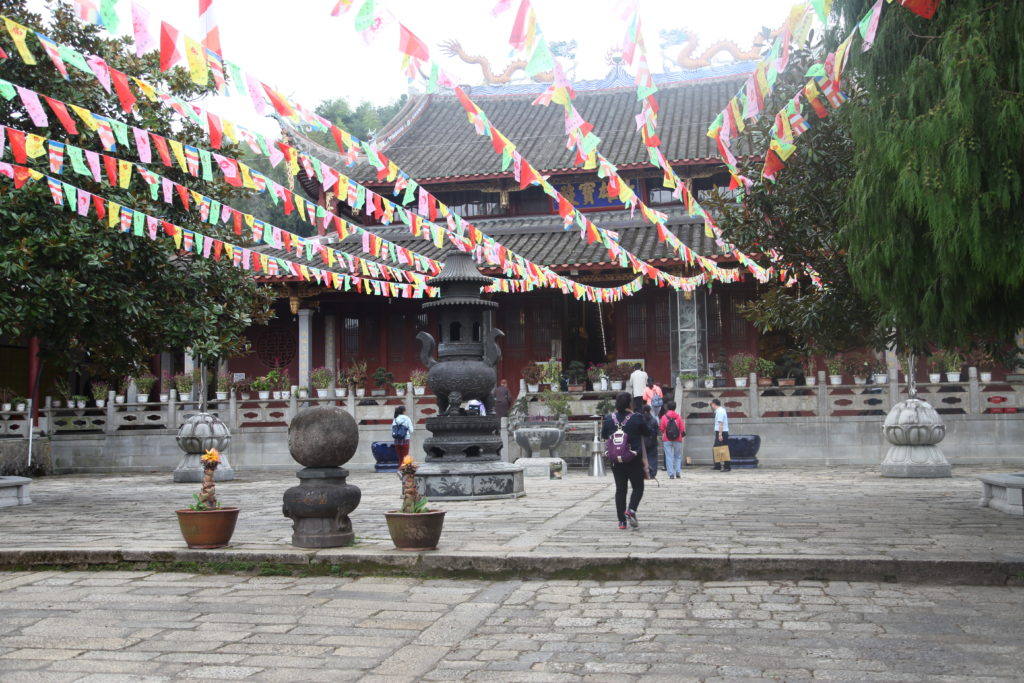 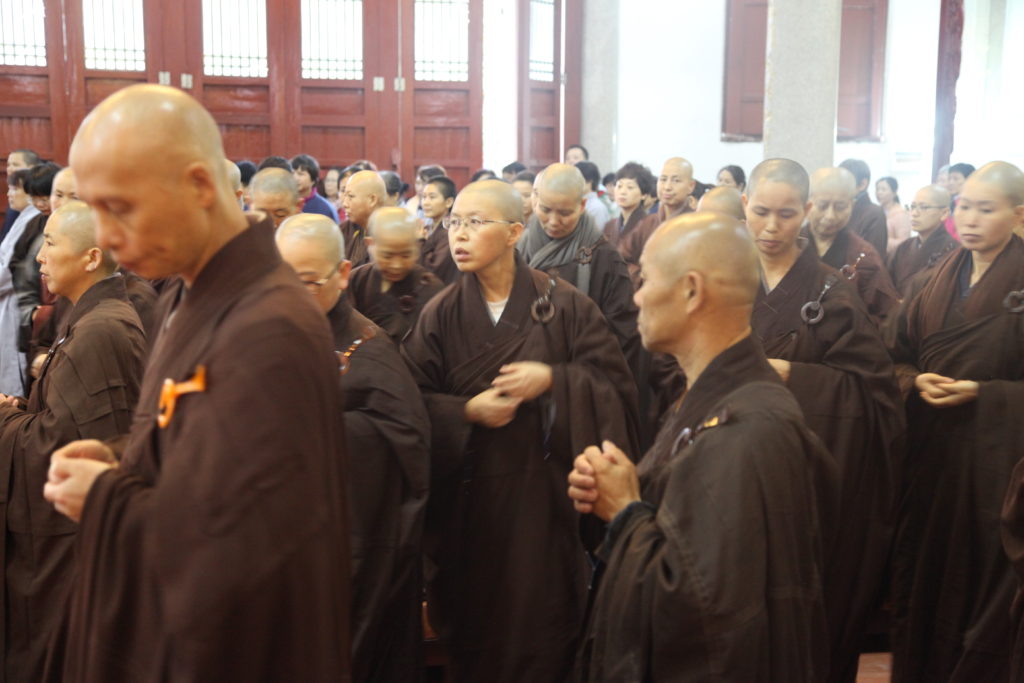 Venerables at the temple 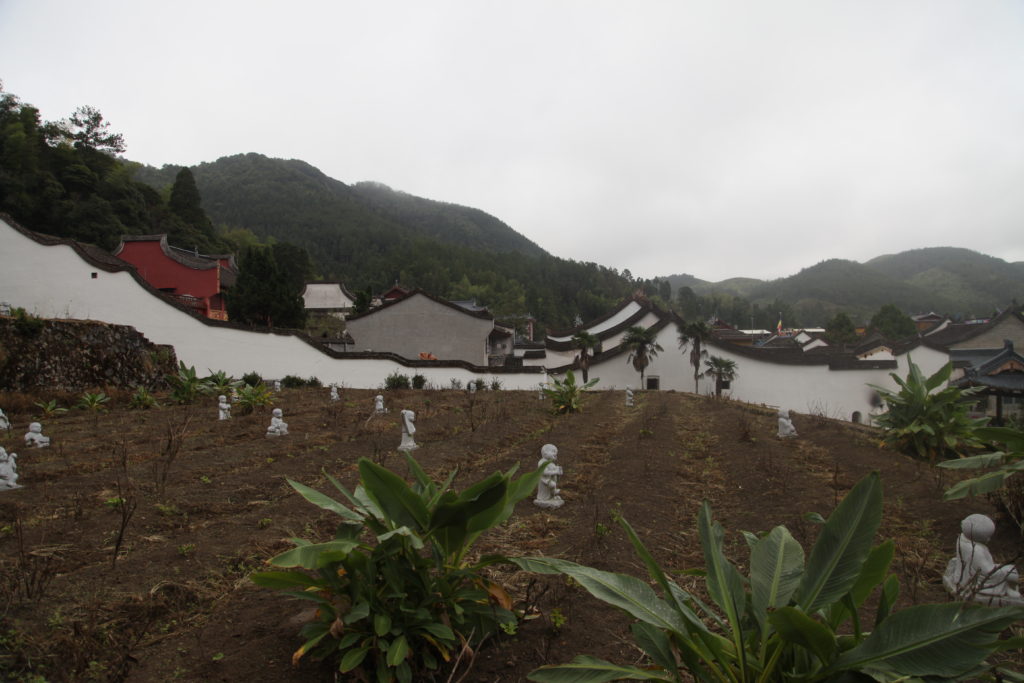 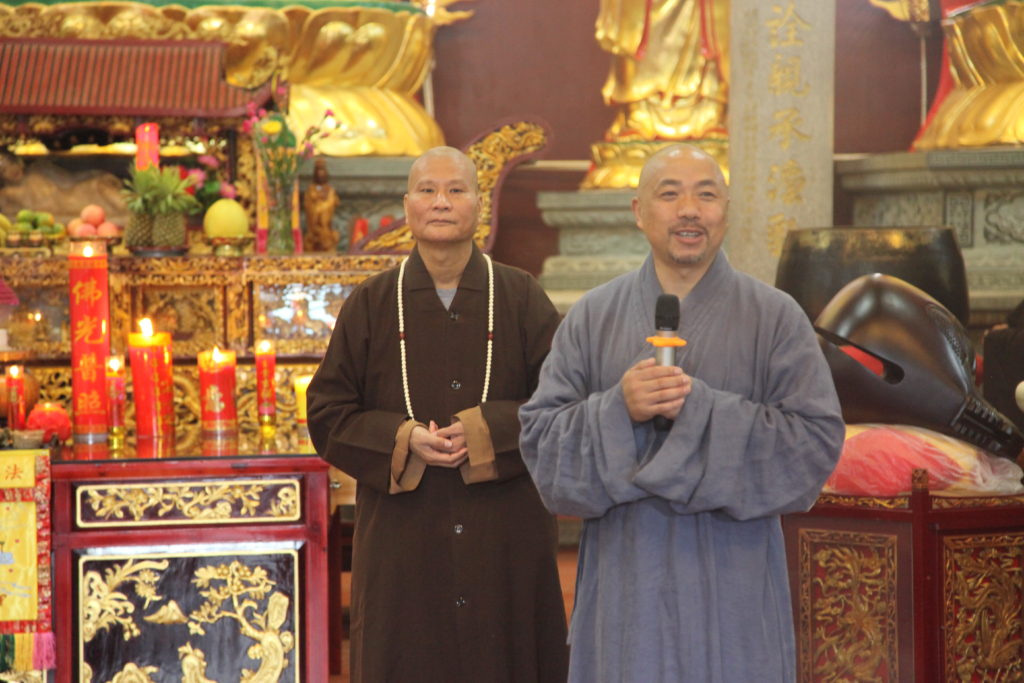 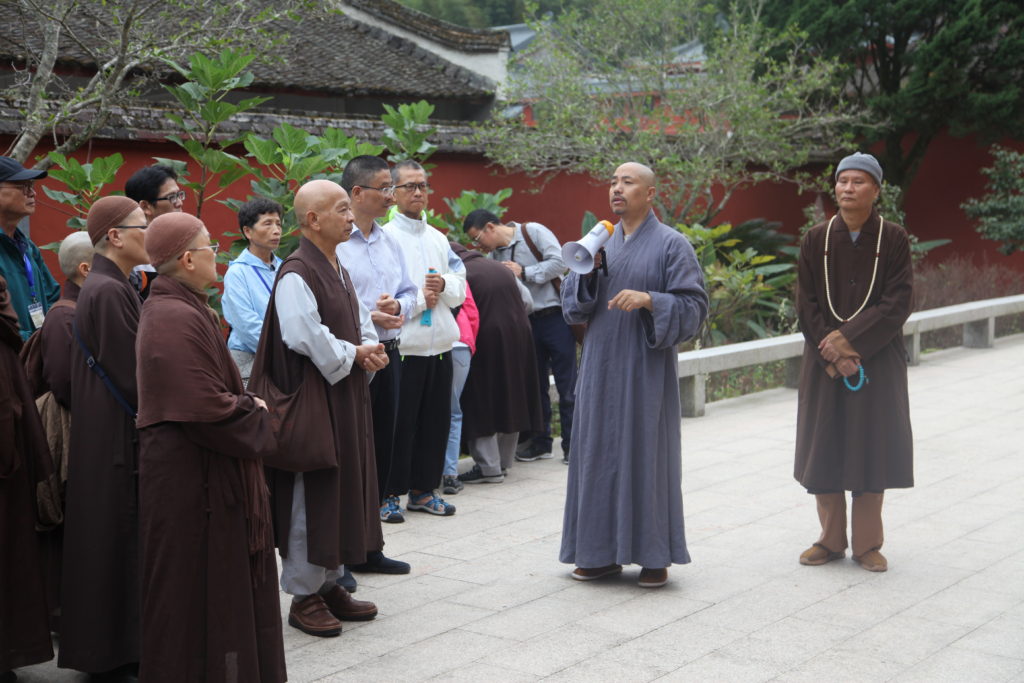 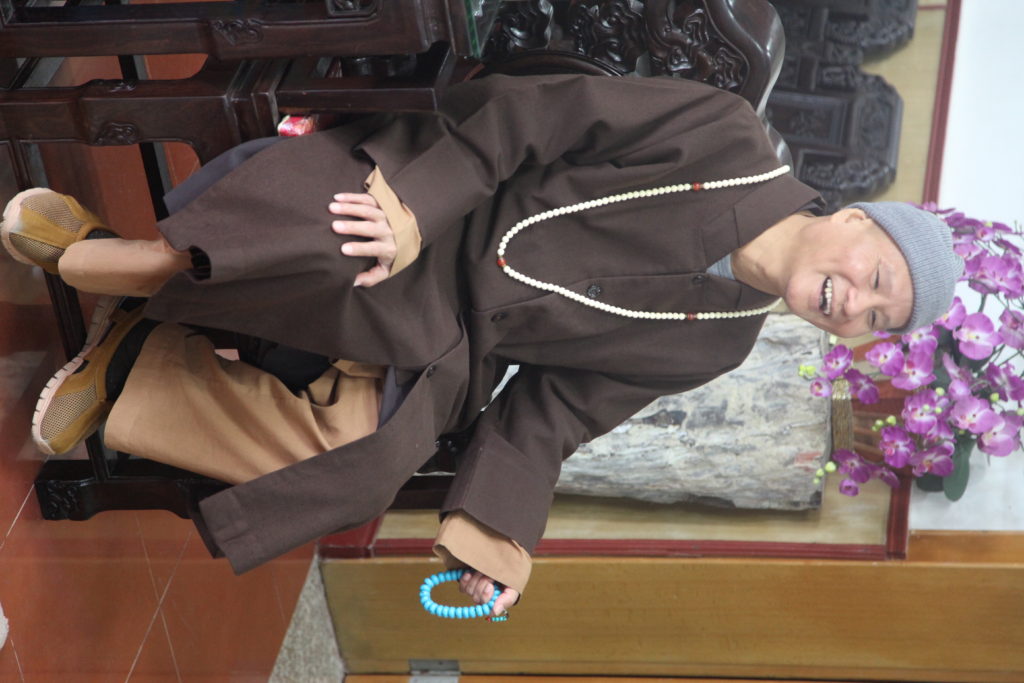 During my time in Fuzhou I made many new friends and met old friends again too. Venerable Zhuang Xing, who I had met at Shuangxi Temple and had taken Big Bear and I on a tour of the countryside and small mountain towns was also staying at Amitabha hotel and attending the classes given by venerable Wu Dao. Over breakfast one day, I joked, “Did you bring your car so we could drive around here and explore the area?” He laughed and replied with the Chinese idiom, “The future is long”(來日方長), meaning, “There will be plenty of time for that later.”

At one banquet just after arriving at the Amitabha Hotel I sat next to a jovial young man, Zhiming, whose English name was Tim. He was the son of venerable Zhuang Yan, one of the venerables of Hwadzan who traveled with venerable Wu Dao. I liked his humorous nature and was fortunate to meet him many times over the following few years. At a Chinese New Year banquet at Hwadzan office in Taipei one year a group of us were discussing learning English and the word, “drama” came up. “What does ‘drama’ mean?” someone asked. Tim replied “Zhuā-mā, bǎ mā zhuā húi lái” meaning “grab mom and bring her back.” The two Chinese words “zhuā” (抓) and “mā” (媽) mean “grab” and “mom” respectively and when said together sound like the English word “drama.” It was extra funny because Venerable Zhuang Yan, his mother was sitting next to him at the table. I was grieved to learn that Tim passed away early this year. His warm and humorous nature is greatly missed.

I also met several members of Hwadzan during my stay at Amitabha hotel, they turned out to be some of my first friends in Tapei.

The day after we visited Chongsheng Temple it was venerable Wu Dao’s birthday. There was a big feast in Amitabha Hotel, and group by group, everyone knelt or bowed in front of venerable Wu Dao and toasted glasses with him. Later everybody sang happy birthday to him. 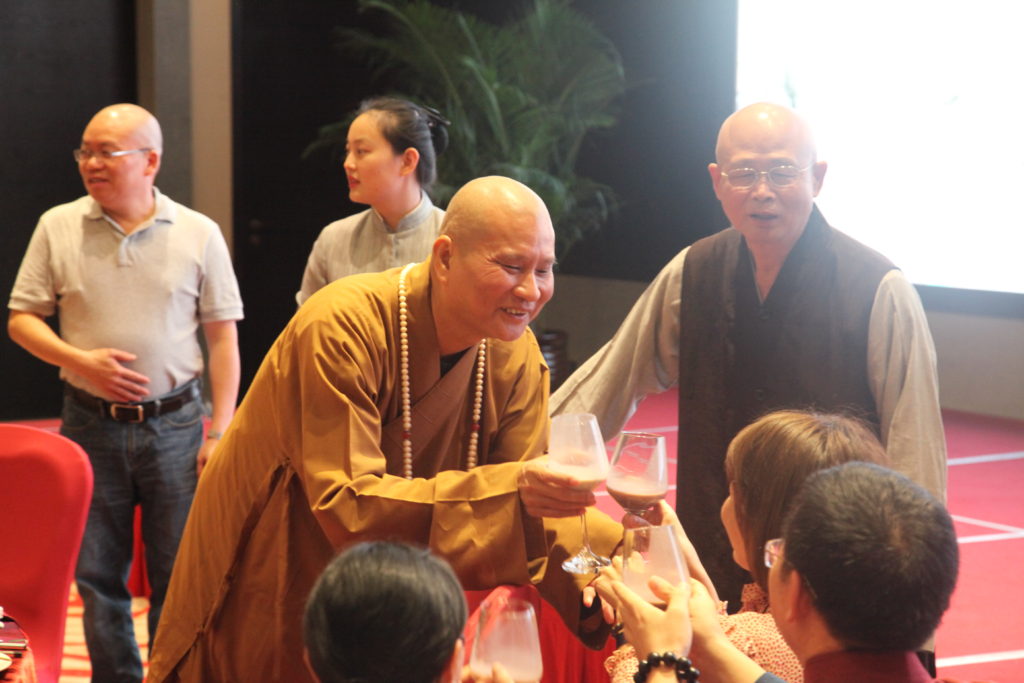 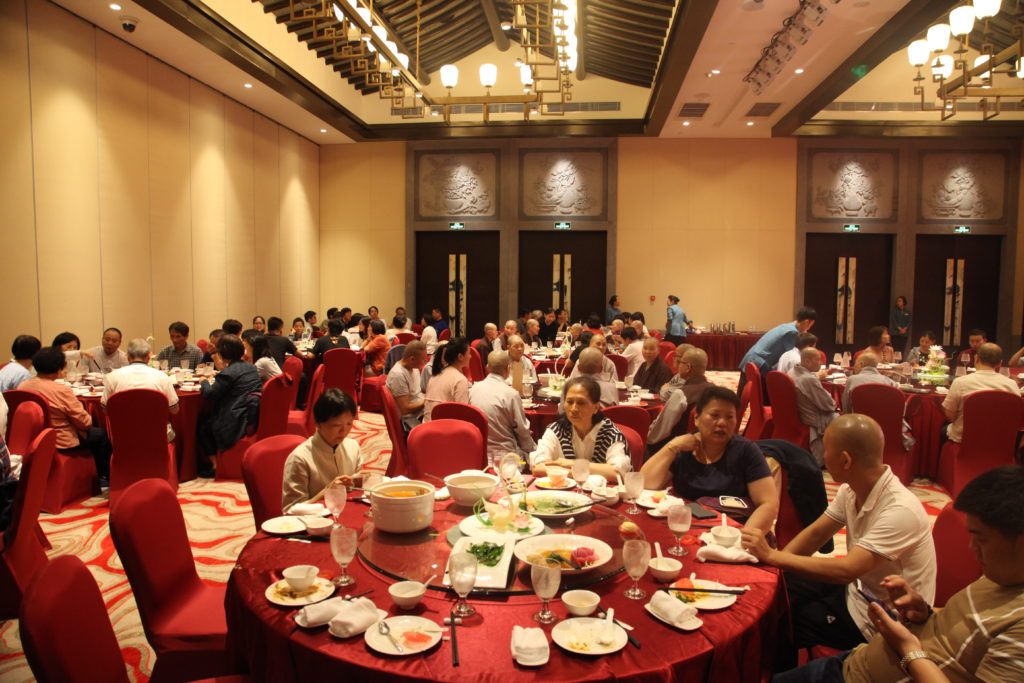 What I will remember most about this experience are the people I spent it with, during classes and traveling around Fuzhou. Below is a video documenting the entire experience.