The Sage King of Thailand

After completing my first video for Hwadzan about Shuangxi Temple in July 2017, Venerable Wu Dao invited me to attend a UNESCO peace conference in Paris, France with Hwadzan. But before that, my next project for Hwadzan would be making a video about Thai culture, Theravada Buddhism, and the late Thai king, Bhumibol Adulyadej. The UNESCO conference would pay tribute to this king, who had passed away a year earlier, on October 13th, 2016.

My first trip to Chiang Mai three months prior had been as an observer of the digital nomad movement, but on this trip I would be seeing things through a slightly different lens. Previously, as a short-term digital nomad I had spent most of my time hanging out with other nomads and working on my online course from Chiang Mai’s plethora of modern co-working spaces and cafes. As a low-cost yet modern city in Southeast Asia, Chiang Mai is a mecca for digital nomads, people who leverage the power of the Internet and low cost of living to build businesses while living life on their own terms. Now, my focus was aimed at the culture, namely Chiang Mai’s old city, temples, religion, and the late Thai king. 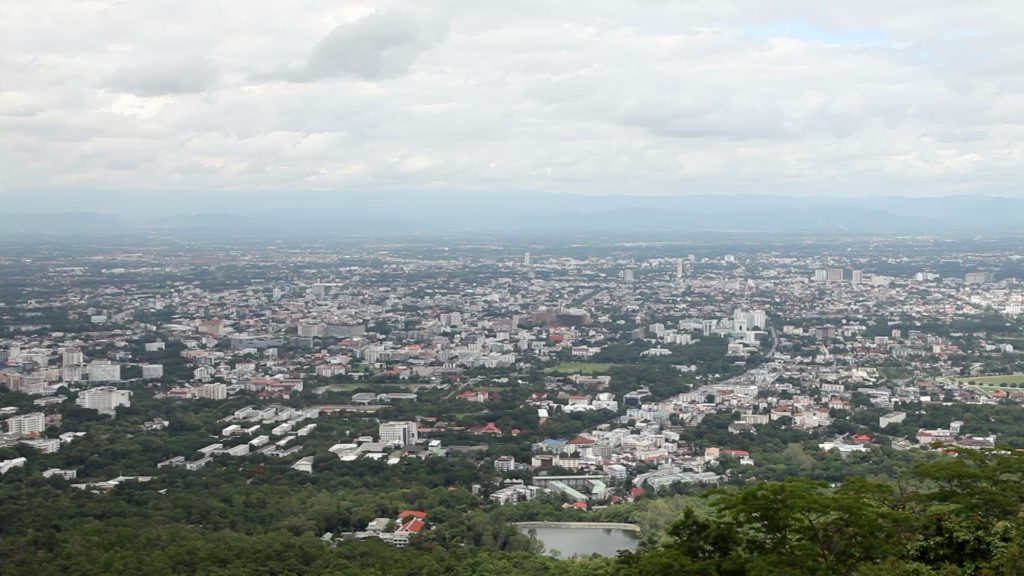 Today, Chiang Mai is Thailand’s second largest city after Bangkok, but it feels much more pastoral than its fast-paced big brother. Chiang Mai was the capital of the Lan Na Kingdom in present-day northern Thailand from 1296 to 1768. The old city is surrounded by a moat and walls, which can still be seen today. Chiang Mai is home to over 300 Buddhist Temples; the Thai the word for temple is Wat. 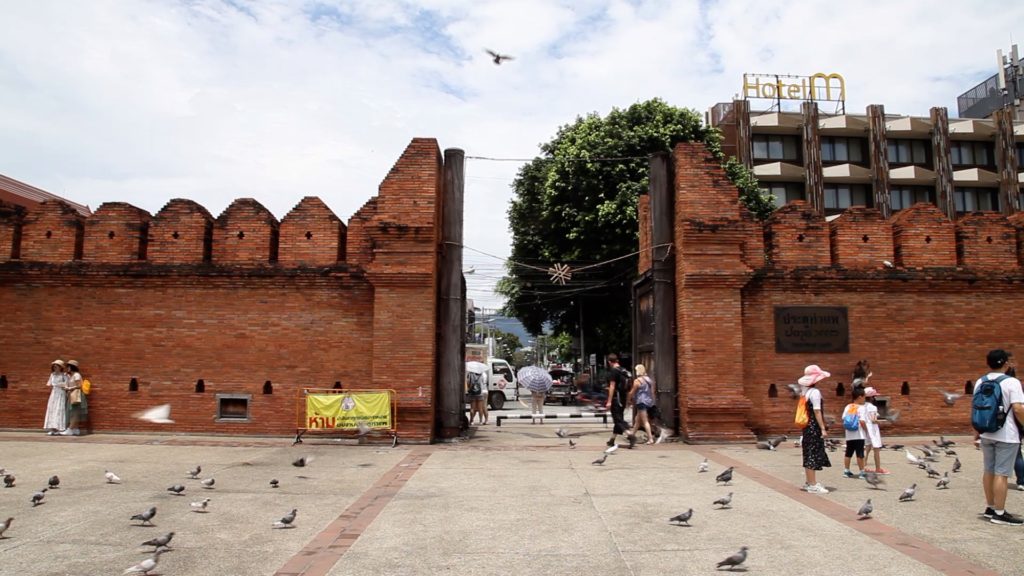 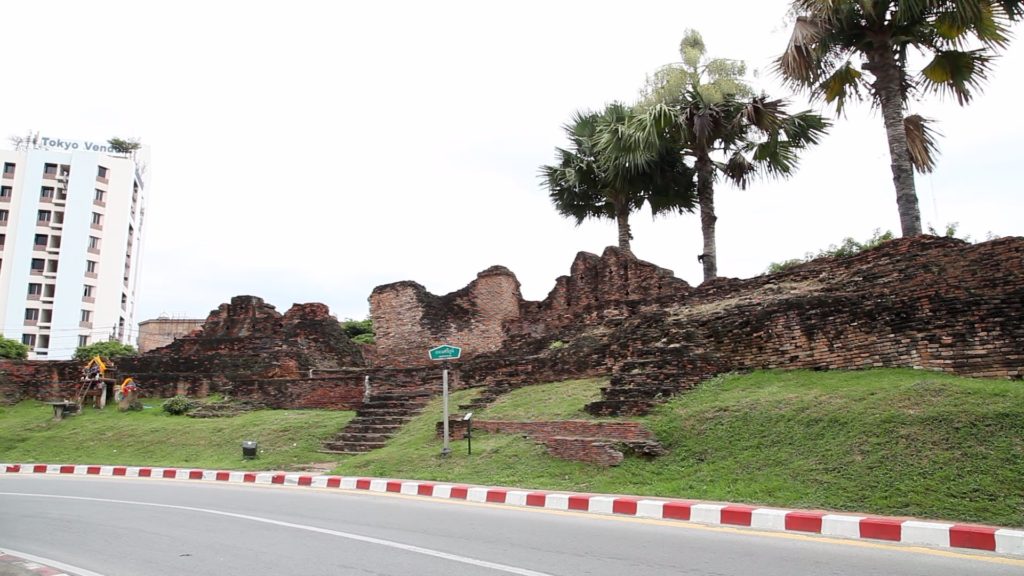 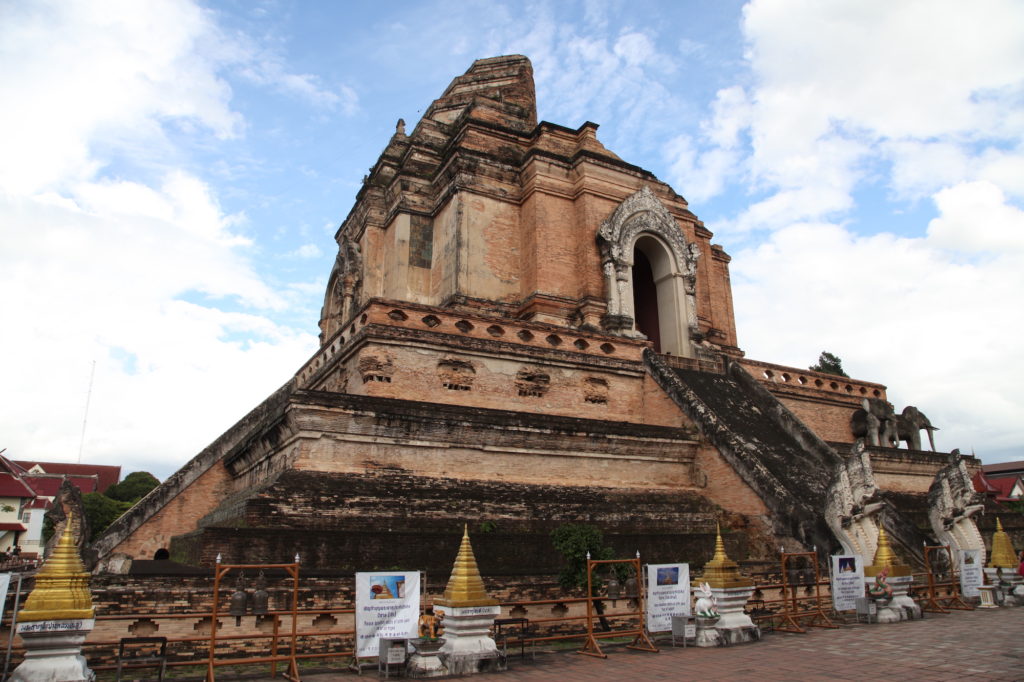 Wat Chedi Luang is a famous Thai temple that is over 600 years old; the temple is dominated by a large Chedi, which is a pagoda structure built to contain relics. 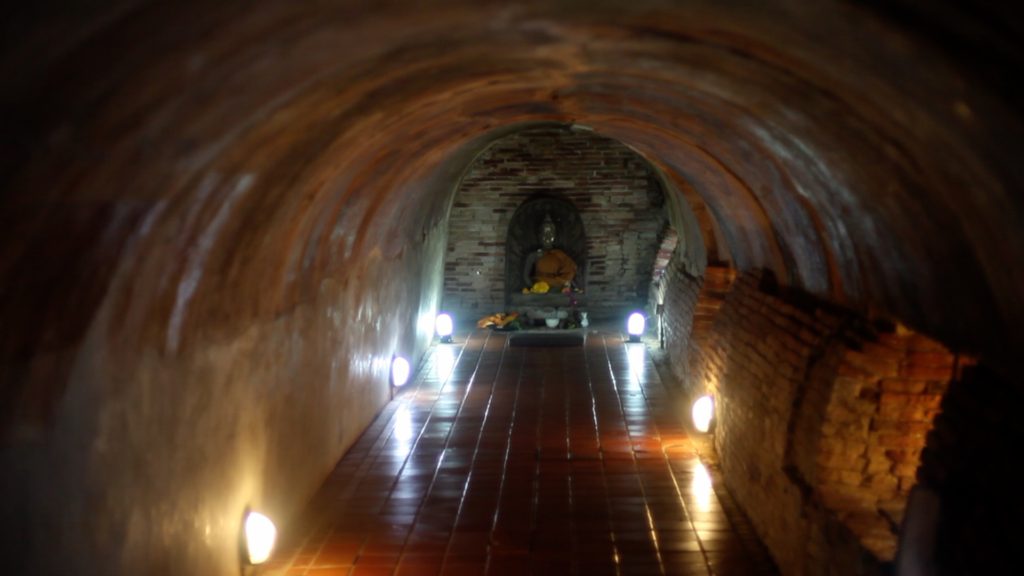 Wat Umong is a forest-cave known for its “fasting Buddha,” which represents Buddha at the end of his long, seemingly fruitless fast, just prior to attaining enlightenment. 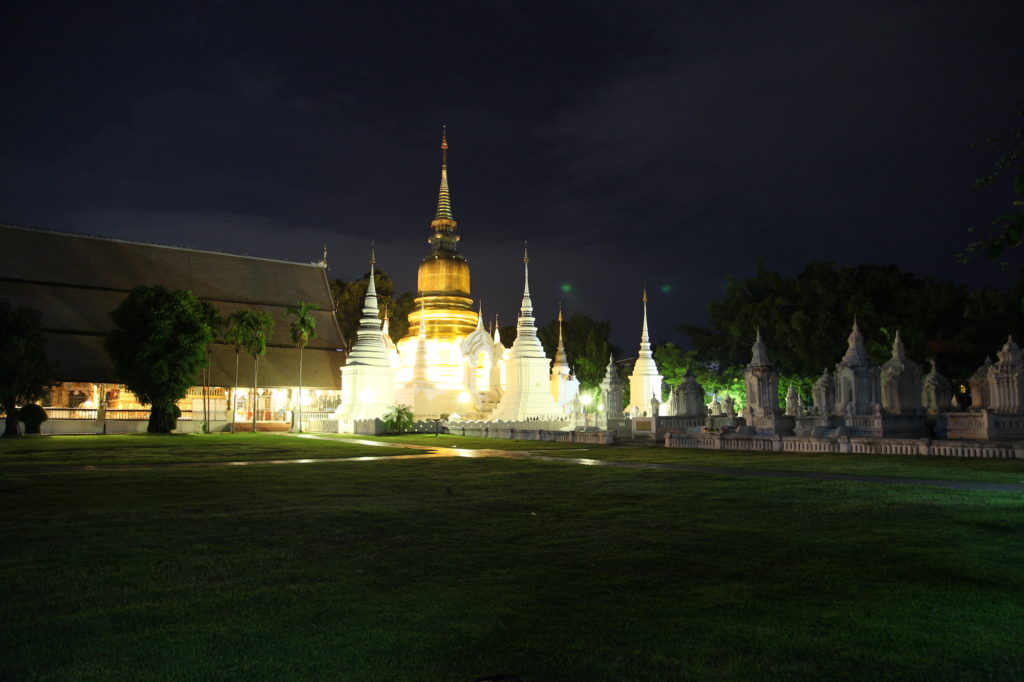 Wat Suan Dok is home to a Buddhist University catering to monks, novices, and lay people. Many of its students come from neighboring countries like Myanmar. 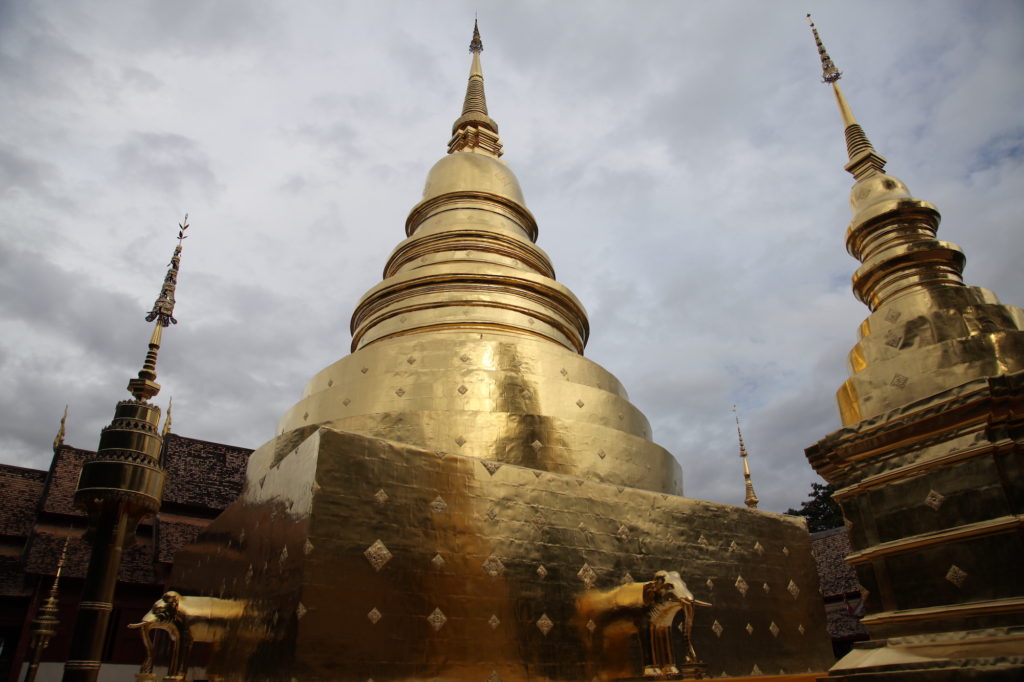 Chiang Mai is surrounded by mountains. The most notable mountain that can be seen from the city is Doi Suthep. Atop Doi Suthep sits Wat Phra That Doi Suthep, a temple dating back to the 13th century. Doi Suthep is also home to Bhumping Palace, which frequently served as a winter retreat for King Bhumibol and his family. The palace is popular for its rose gardens, which receives many visitors every year. 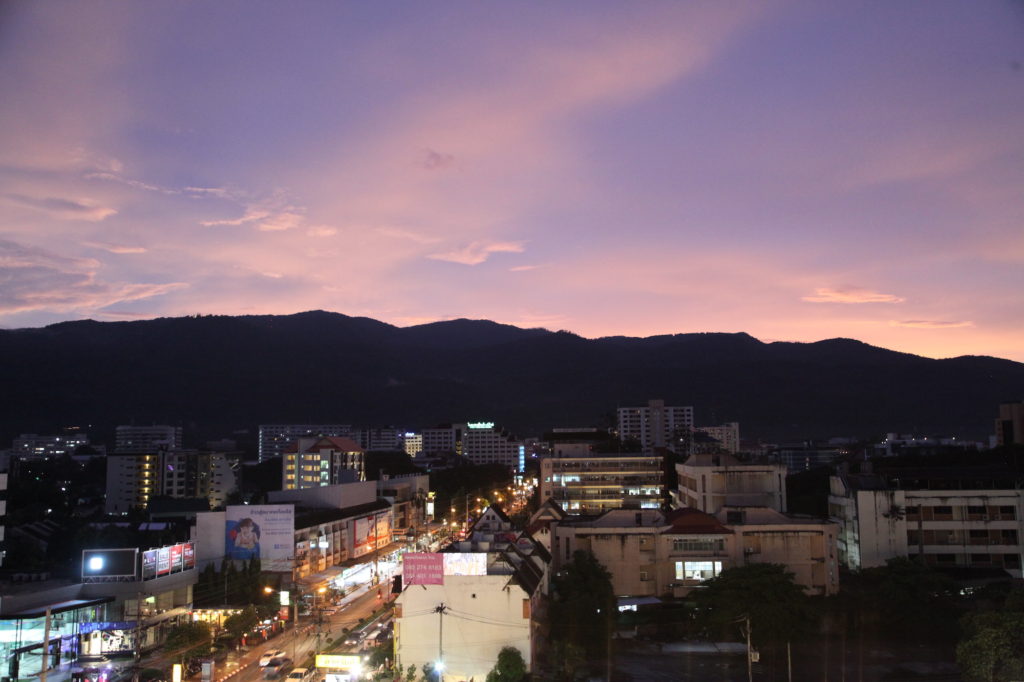 Chiang Mai with Doi Suthep in the background 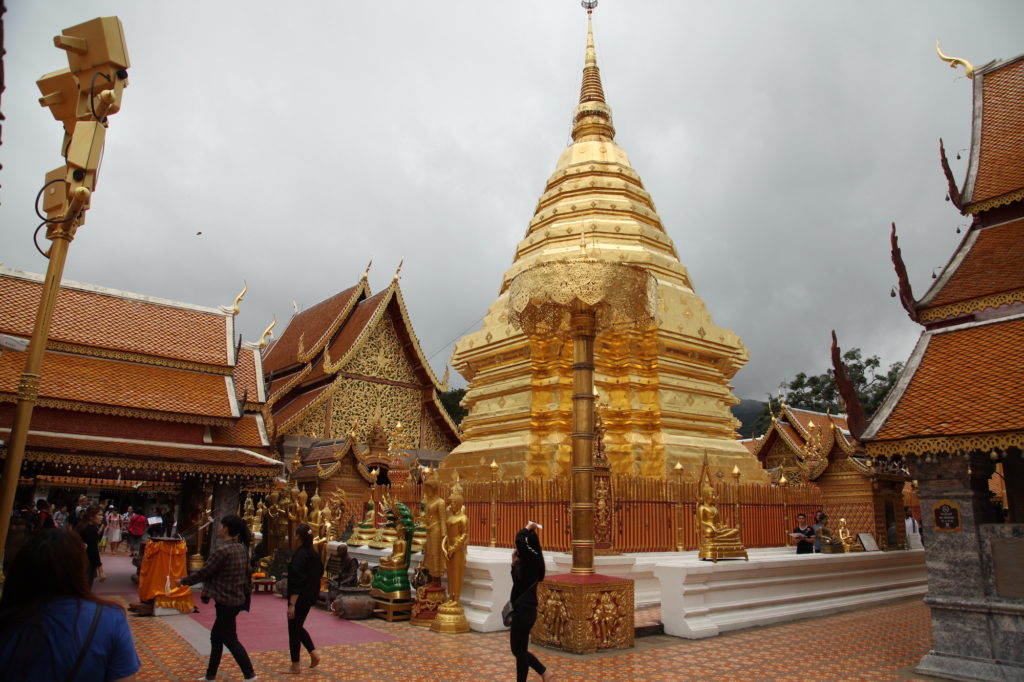 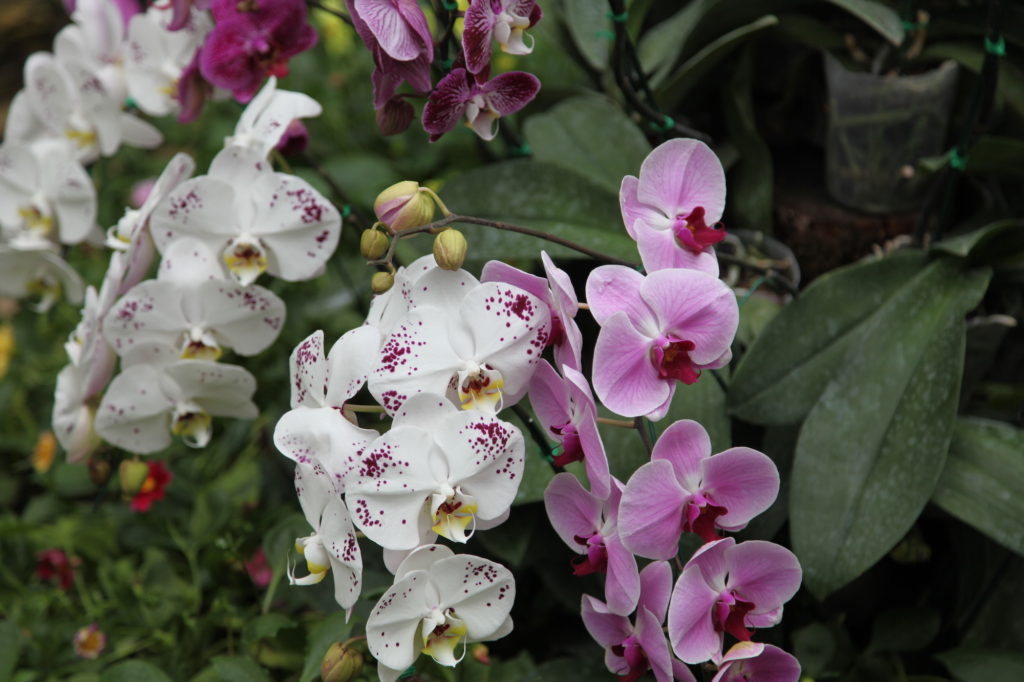 The city has a laid-back vibe, resulting from a mixture of old traditions and modern conveniences. The tradition and history of the old city can be seen everywhere, from the city walls to the monks walking the streets in their bright orange robes. Meanwhile, the Nimmanhaemin quarter features oodles of hip cafes and shopping malls. 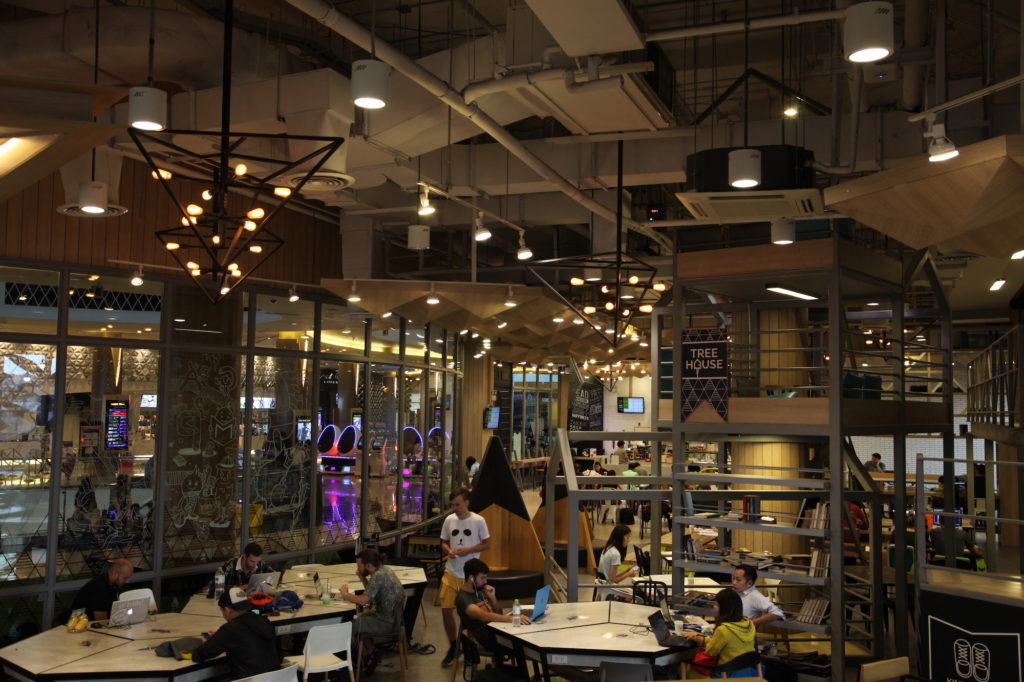 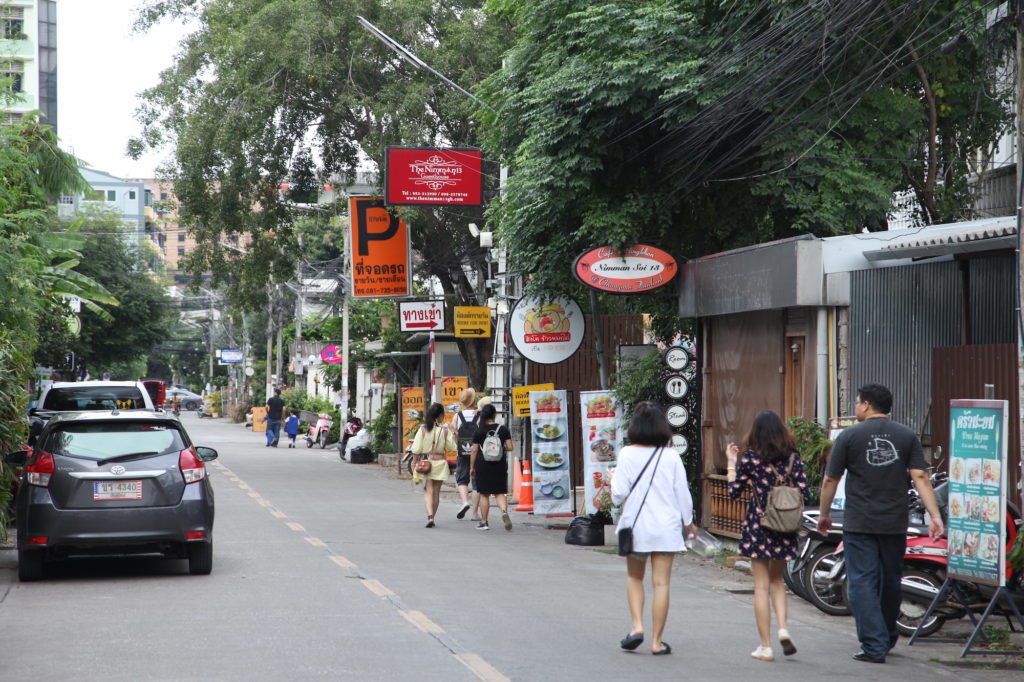 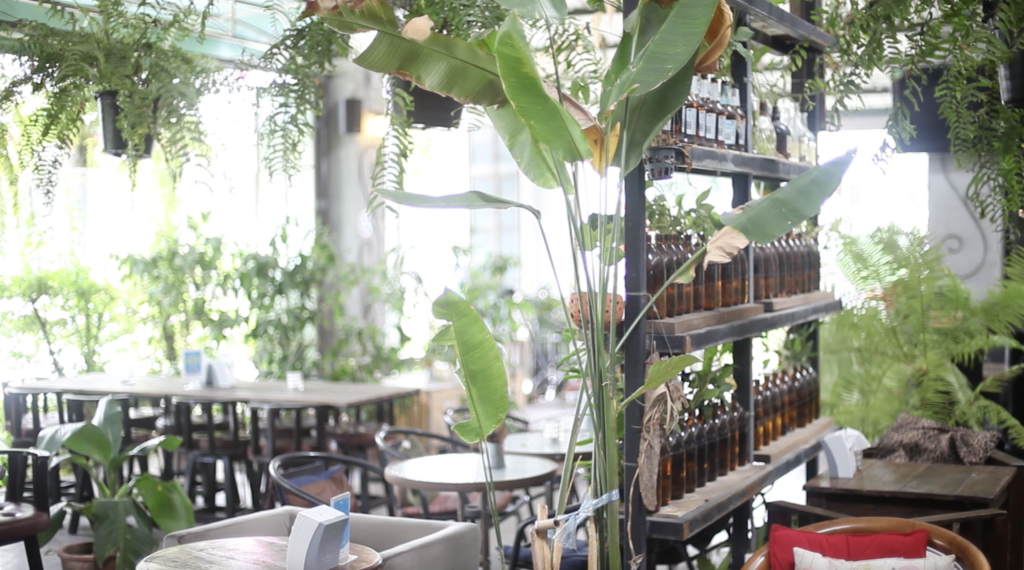 During my second visit to Chiang Mai, my friend Jack and I took a trip to remote Chiang Dao mountain. An hour’s drive north of the city, the mountain houses Indiana Jones-esque caverns and Buddhist shrines. With Jack’s help, I collected footage for future videos. 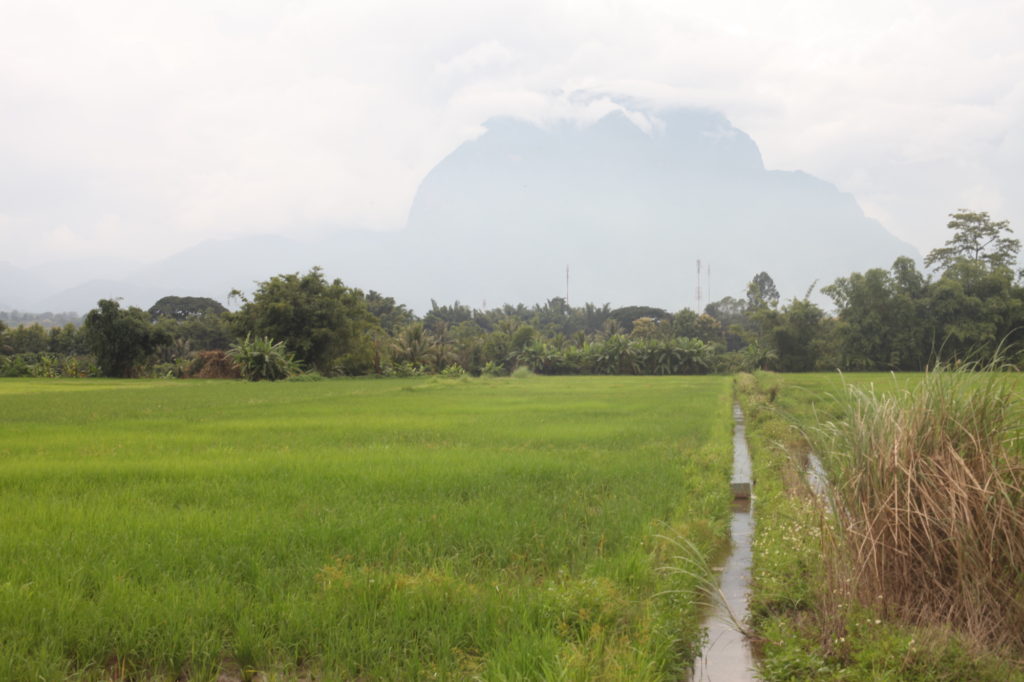 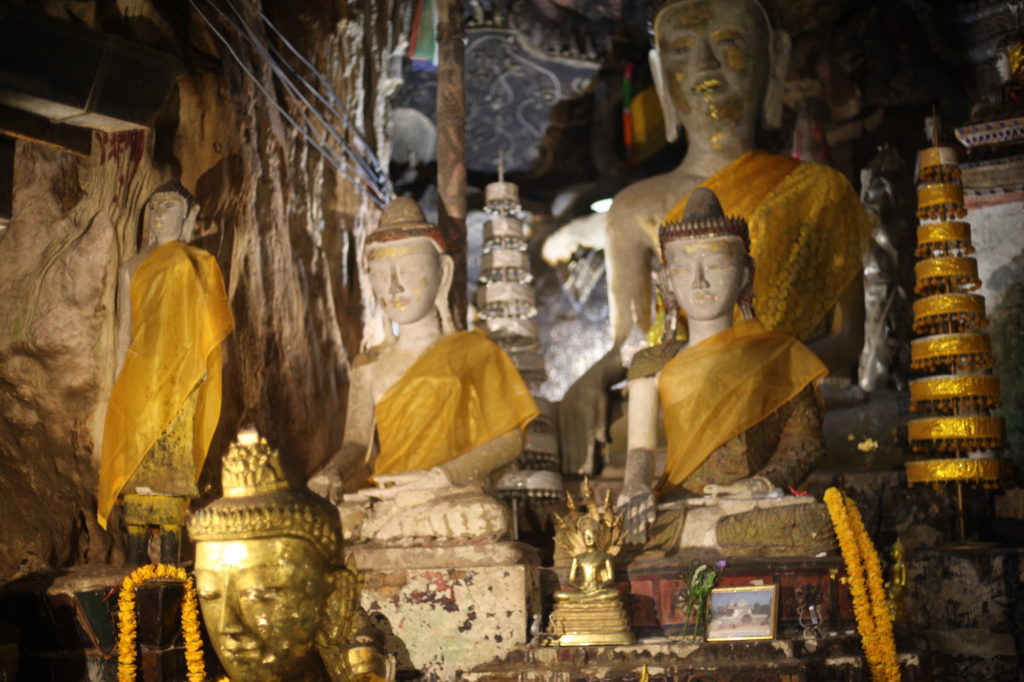 At many temples in Chiang Mai, visitors can take classes with monks to learn about how they live. At Wat Suan Dok, I was fortunate to join one such class. The class consisted of a dozen or so westerners from countries like Greece, France, and Germany. 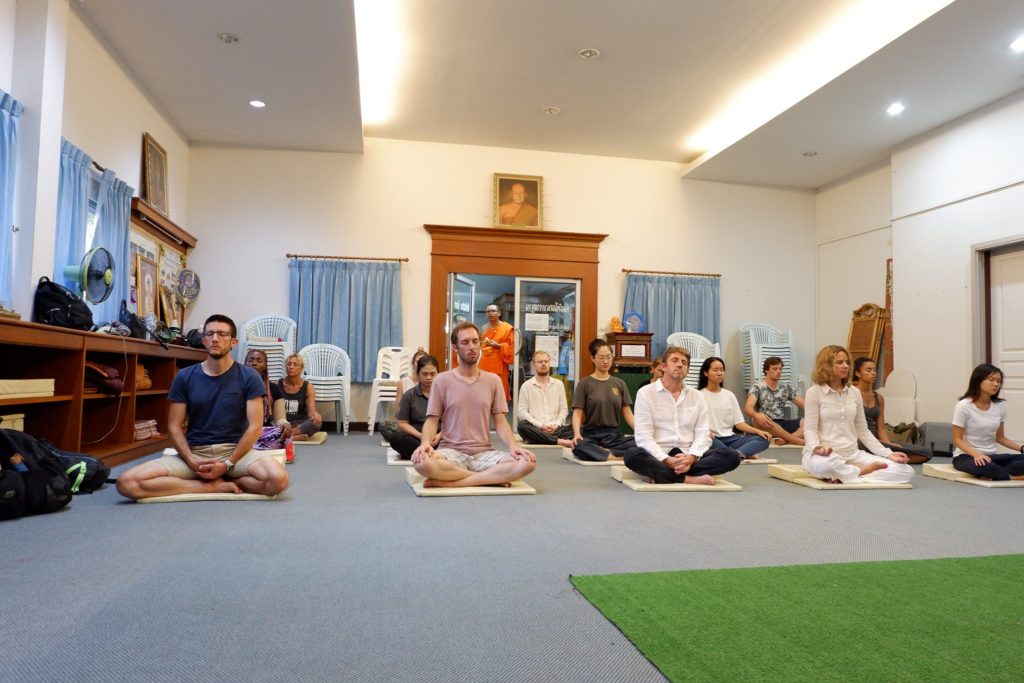 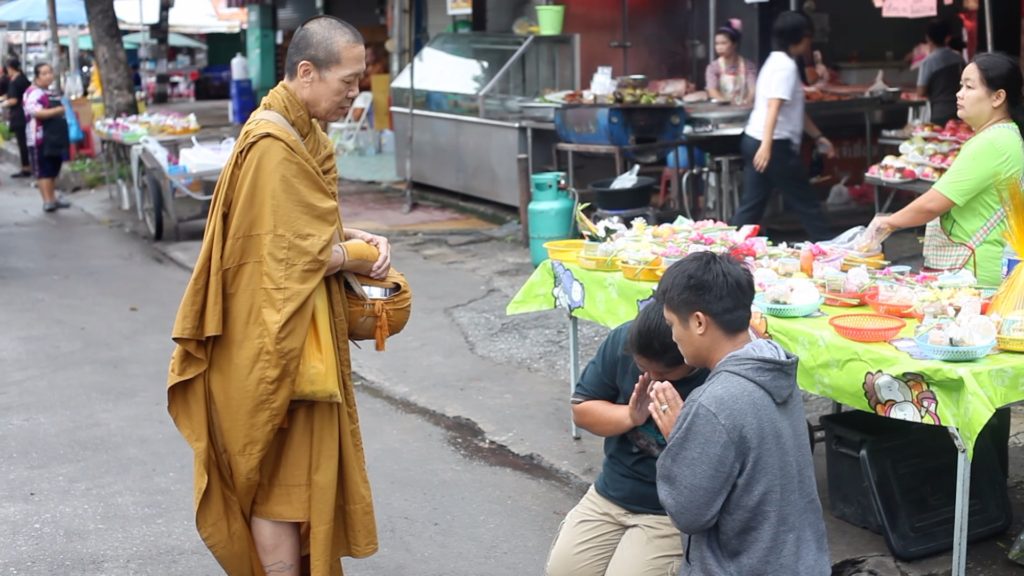 Every day, Theravada Buddhist monks only eat before noon. They also do not handle money. Monks and nuns undertake training that consists of 227 rules, such as refraining from harming living beings or accepting anything that isn’t freely given.

In Thailand, boys may become monks for a few years as a means to obtain an education. Afterwards they may decide monastic life is not for them and go on to find work and get married. For men in Thailand, it is a rite of passage to become an ordained monk at some point during their lives, even if only for a few days. 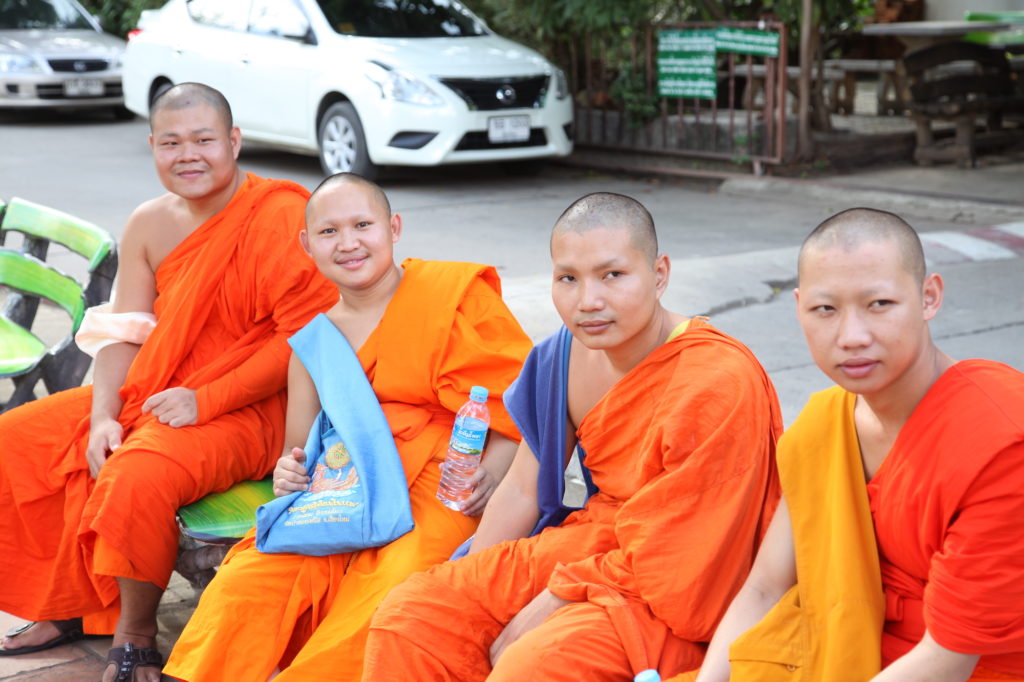 The Sage King of Thailand

Everywhere I went in Thailand, I saw pictures of the late King of Thailand, Bhumibol Adulyadej. His picture can be found on billboards, in restaurants, in temples, and many other places. Seeing the king’s picture everywhere made me curious about who he was and what contributions he had made to his country. 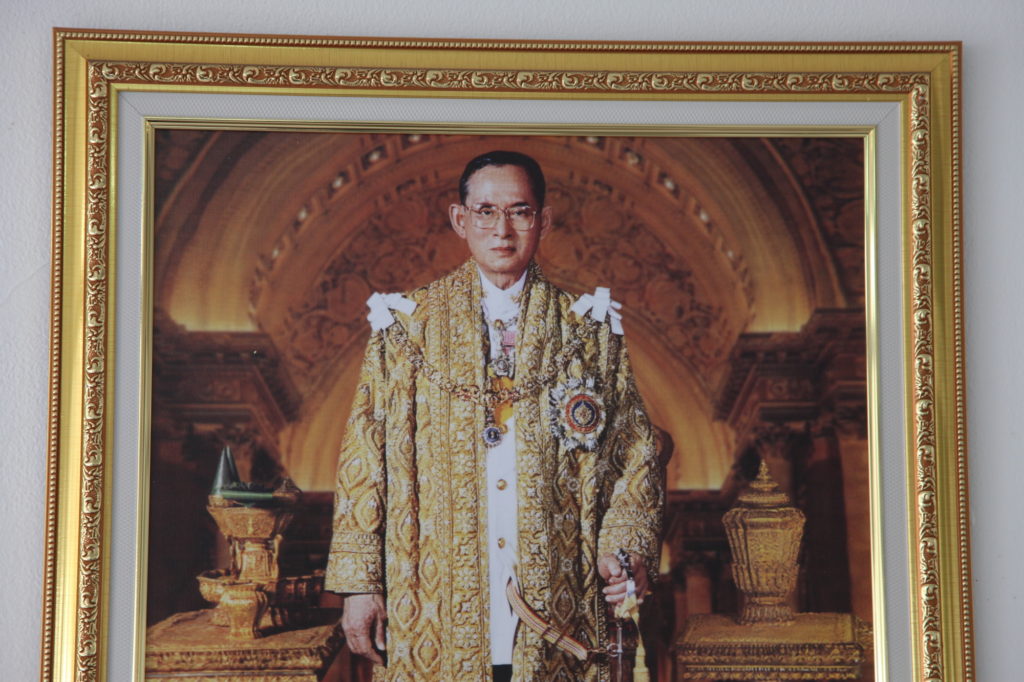 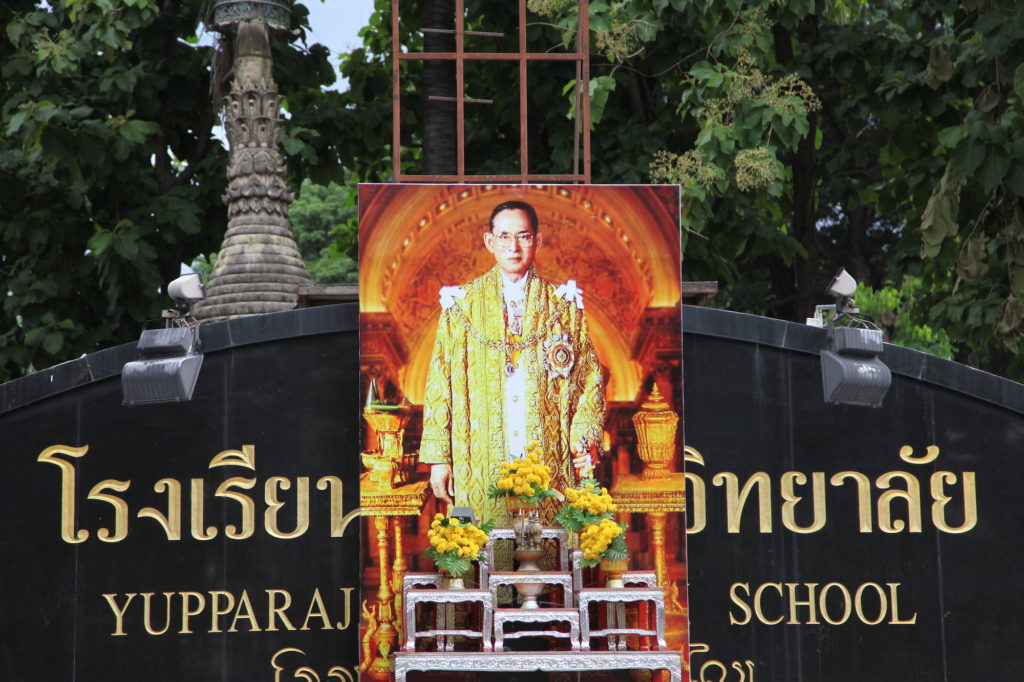 I learned that the Thai people loved their king so much because he loved them. During his 70-year reign, he helped millions of Thais by improving their self-sufficiency, the Thai economy, agriculture, and education. Through tireless travel to poor and rural areas of Thailand, after consulting with experts, the king initiated royal development projects to help people. To date, there have been over 3,000 royal development projects in Thailand.

While visiting northeastern Thailand, the king found that droughts were becoming more frequent and severe in that area. Due to large-scale logging, rainfall had declined. Leveraging scientific research, the king was able to increase rainfall. As a result, he became known as the rainmaking king. 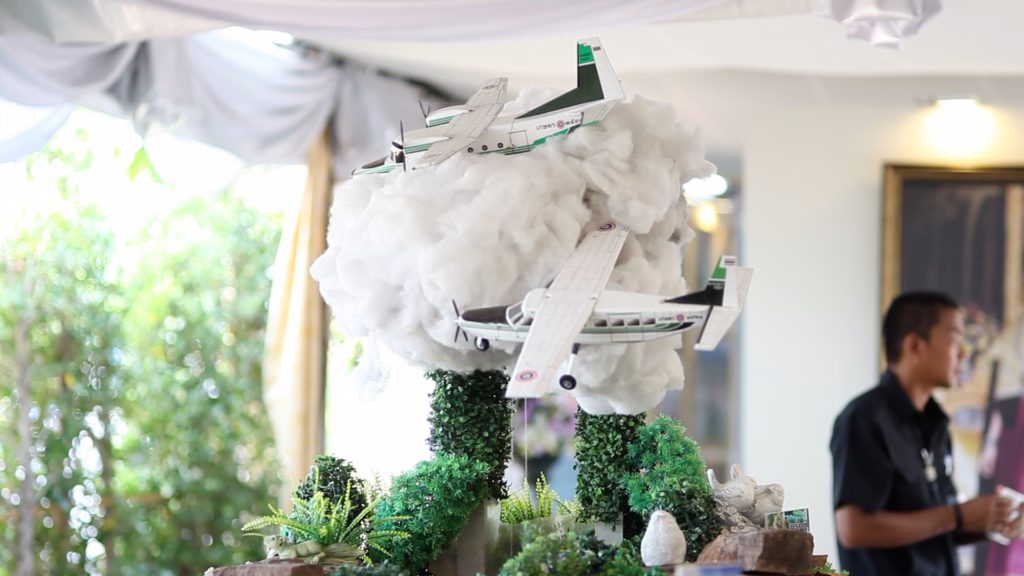 A model depicting how the king increased rainfall in northeastern Thailand

During his reign, the king developed what was known as his “New Theory,” a program that re-envisioned agriculture in Thailand with the aim of optimizing land use and conserving water. In the New Theory, a plot of land is divided into four portions: 30 percent for reservoirs, 30 percent for rice fields, 30 percent for mixed crops, and 10 percent for homes, barns, and livestock.

The Phra Dabos School is a royal-initiated, non-profit project established to provide occupational training and studies to students who have dropped out of school due to poverty. At the school, not only do students learn a trade they can use to provide for themselves and their families, they also learn about concepts like self-composure and consciousness, as well as how to lead a virtuous life by following moral principles of social conduct. The king emphasized that these moral principles should be learned in parallel with vocational studies and training.

Mae Kampong is a village in northern Thailand near Chiang Mai. The people there once cultivated opium poppies, but after the king helped introduce coffee plants and other cash crops, not only did it decrease the supply of narcotics, the area also prospered. Shops selling various products grown as a result of royal projects like this one can be found all over Thailand. 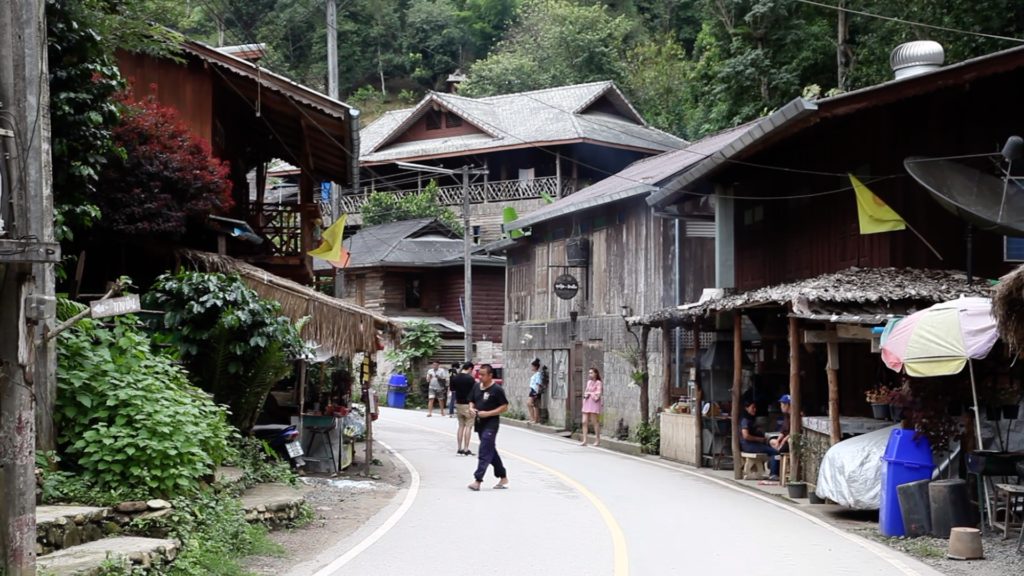 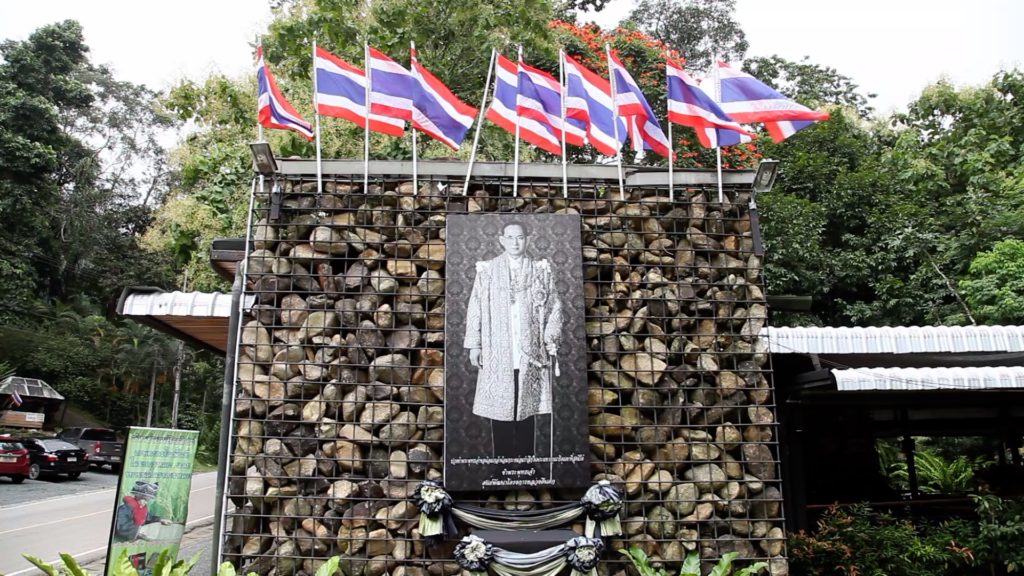 To me, King Bhumibol was a modern-day saint. These acts of love for his people clearly demonstrated what the ancient Chinese said of an ideal sage king: “He loved his people as if they were his own children” (愛民如子).

After a few weeks of exploring Chiang Mai and environs, I flew to Bangkok to collect more footage and learn more about the Thai king.

Thailand is called the “Land of Smiles” because its people are always smiling. They are very friendly and easy to talk with. In Bangkok, a friend of a friend named Jantira, who I had never met before, offered for me to stay at her home during my visit. She was an amazing host, helping me do research for the video I was working on, taking me to various temples and royal sights around the city, and making milk tea for us every morning as we listened to BBC radio.

Jantira brought me to many famous sites around Bangkok related to the late Thai king and Thai culture, including a Phra Dabos school, a shop selling goods grown at royal projects, the Rama VIII bridge, the giant reclining Buddha, and Bangkok’s Chinatown. 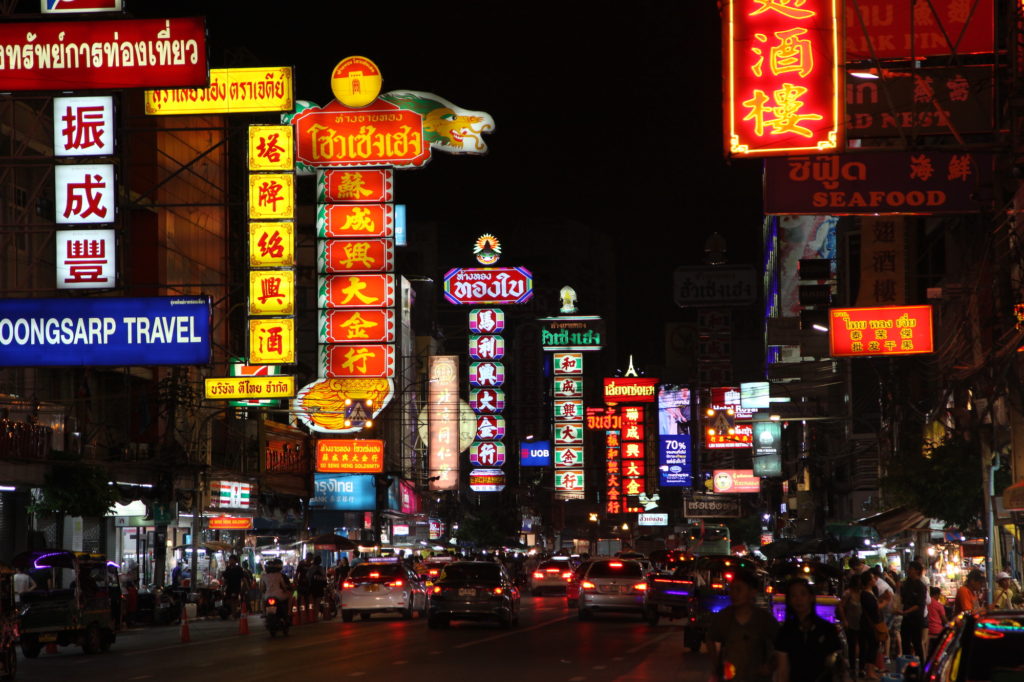 Our exploration also took us outside Bangkok to the ruins of Ayutthaya. From 1351 to 1767, the ancient city of Ayutthaya was the capital of the Ayutthaya kingdom, which covered much of present-day Thailand. At one point, it was the biggest city in the world with a population of one million people. Ayutthaya was on friendly terms with many countries and traded with the Dutch, Japanese, Chinese, and English, among others. The sheer number of intact ruins in Ayutthaya was amazing I took tons of pictures and highly recommend a visit here for anyone traveling to Thailand. 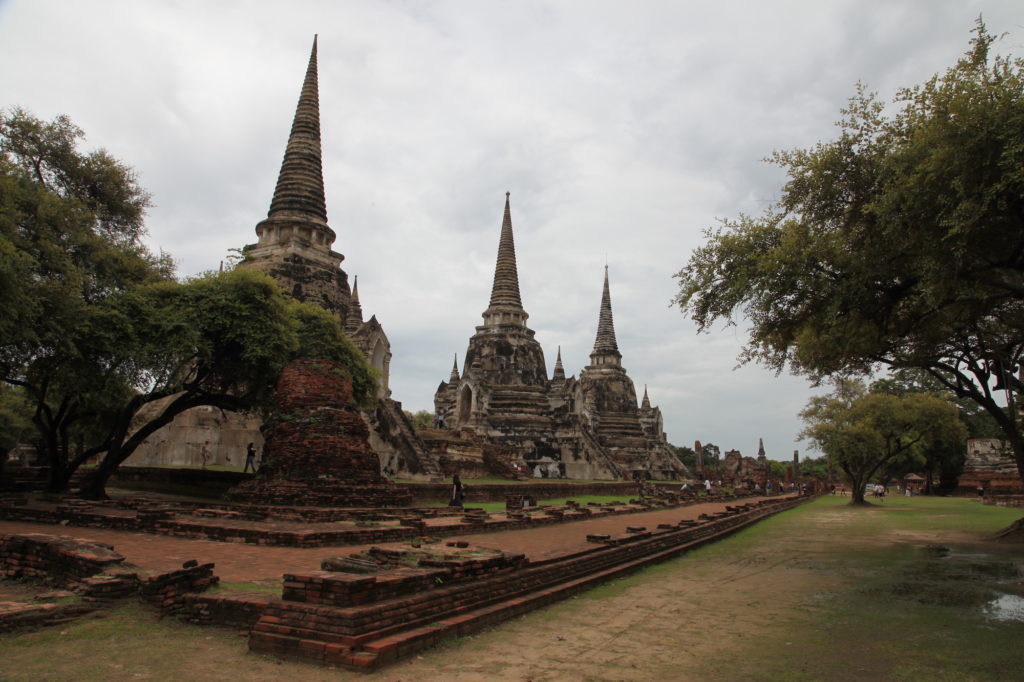 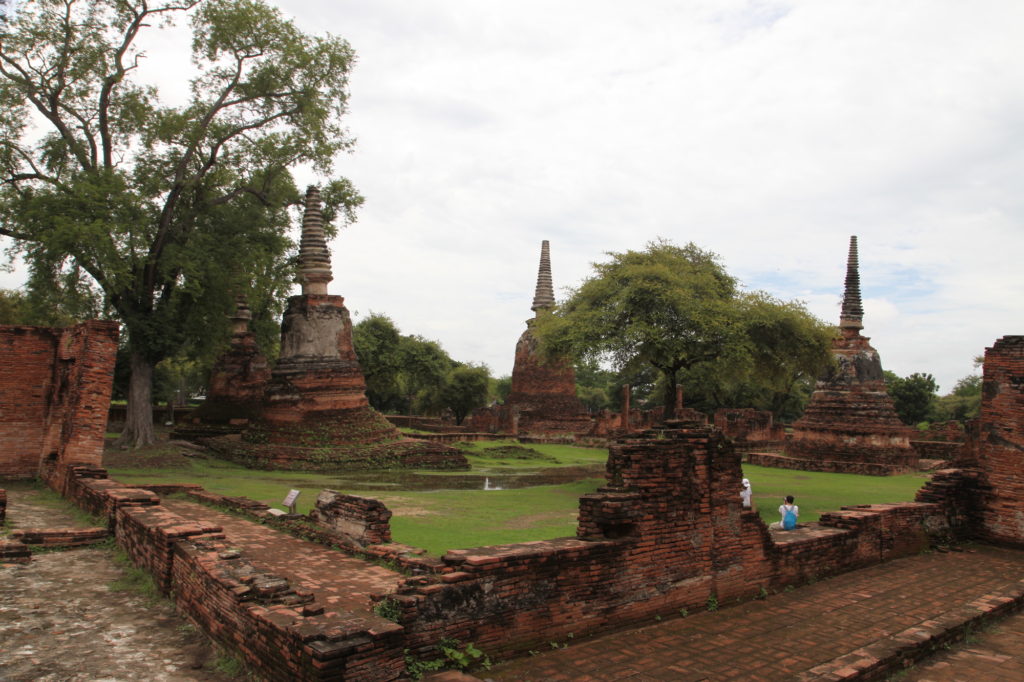 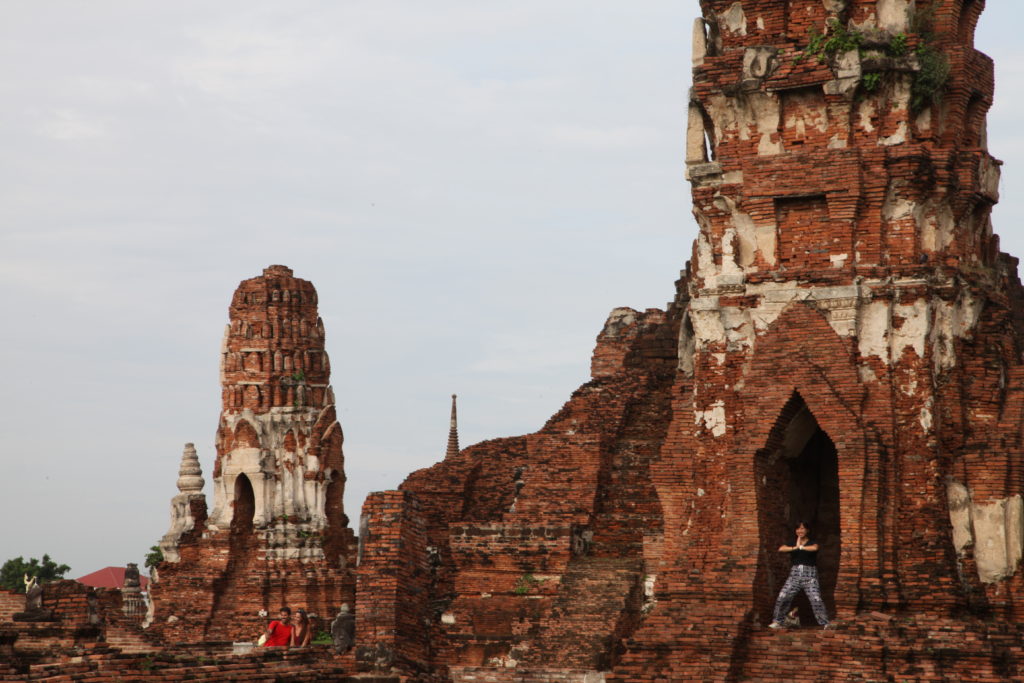 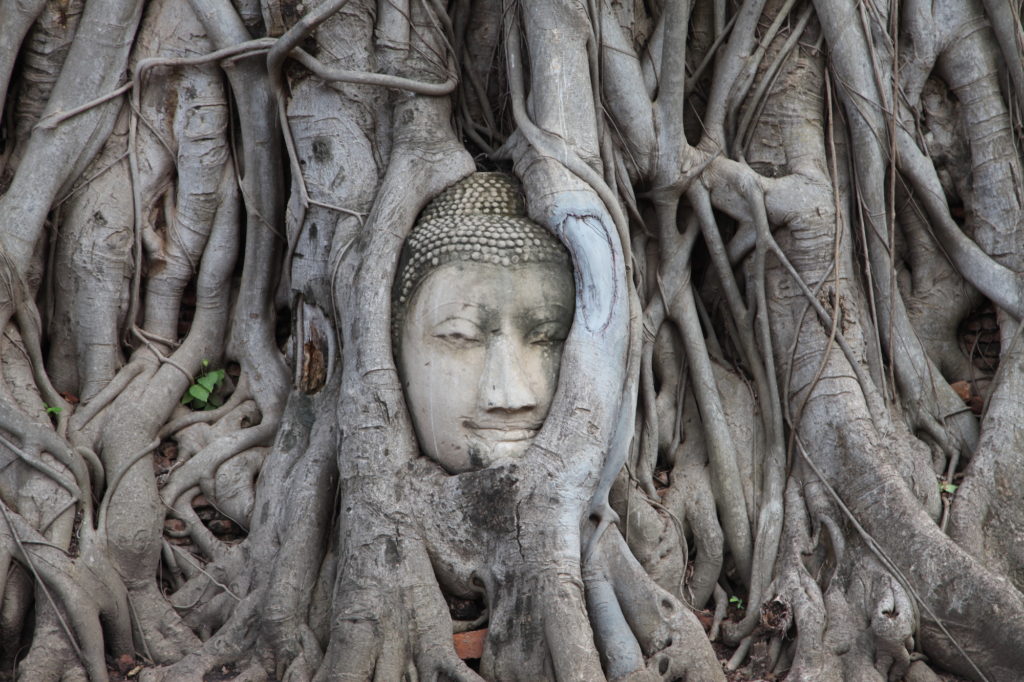 One of the main items on our itinerary was visiting the Royal Palace where the king’s body was held. Millions of people come to the palace from all over Thailand and other countries to pay respect to the king. After the king’s death in 2016, there were thousands of people who waited in line all day and all night to pay their respects. At one point, the line to see the king was over two kilometers long. 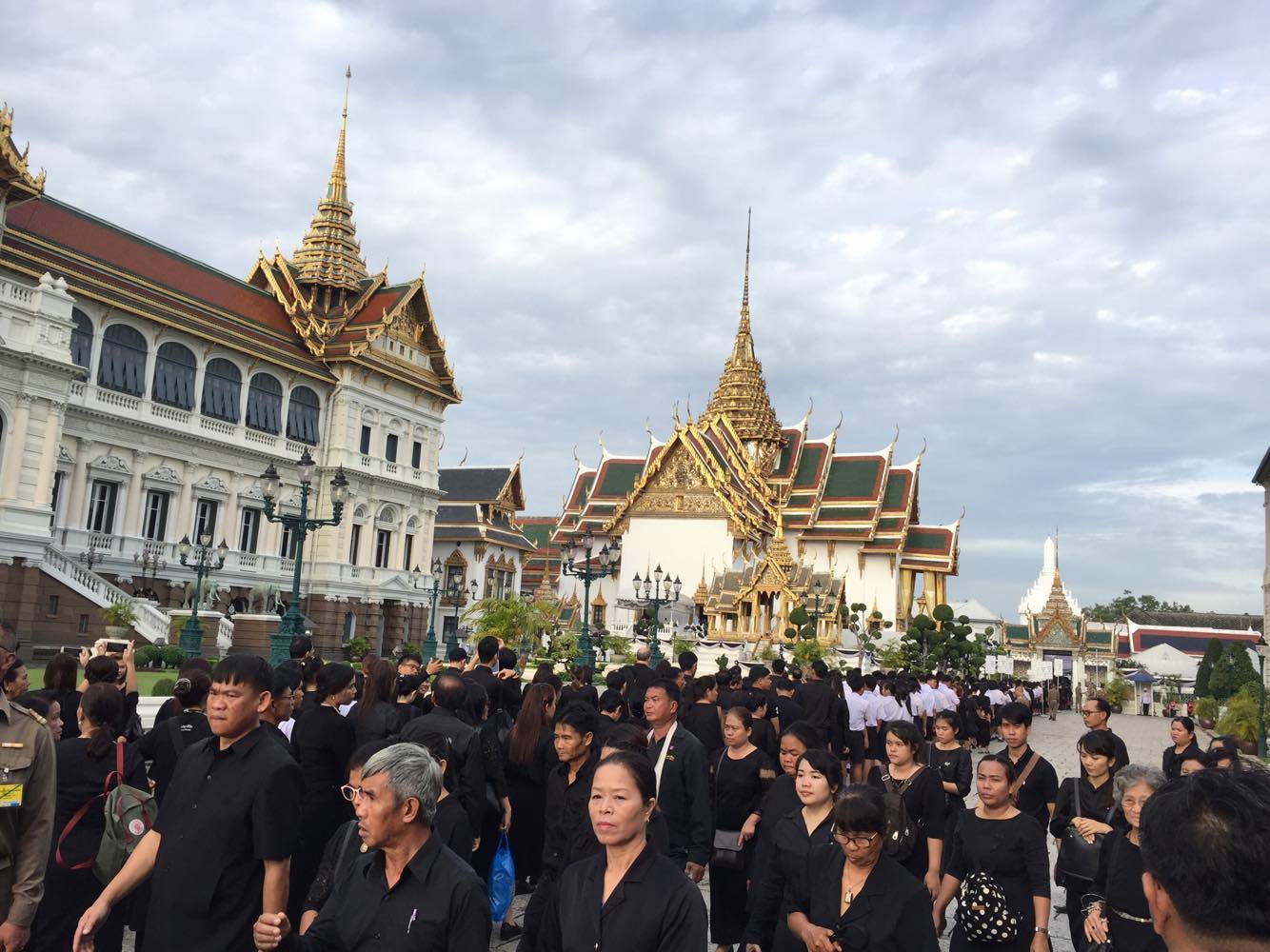 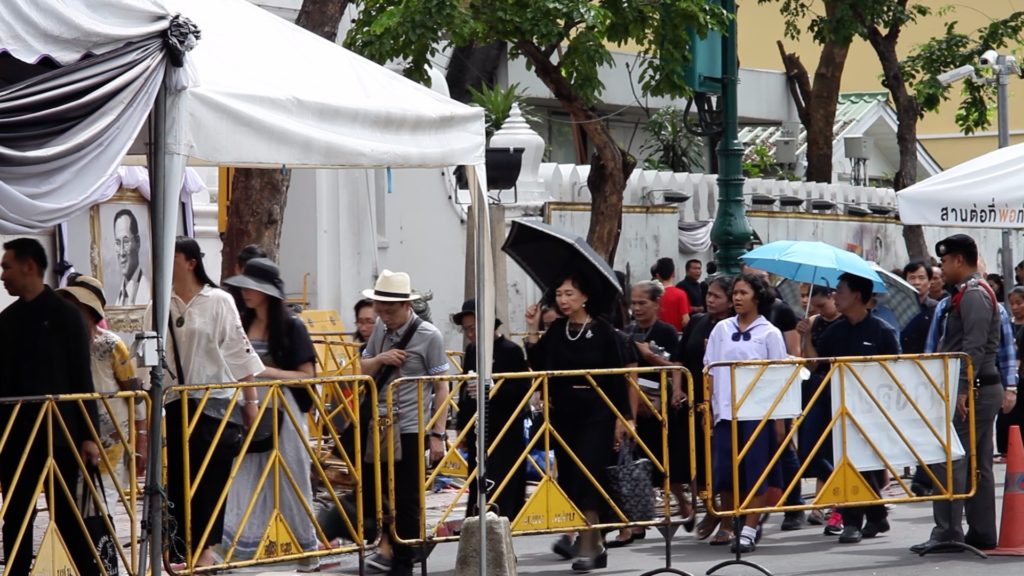 It was very moving to wait in line with hundreds of people coming to pay their respects, and it became clear to me the huge impact the king had on his people. The Thai people always say, “We may not be the best country in the world, but we have the best king.” It’s a phenomenon that resembles a description of peoples’ relationship to an ideal king in ancient China: “People served and loved the king as their own parents. People looked up to the king as they did the sun and moon. People respected their king as they would divinity. People were in awe of the king as they were of thunder” (民奉其君，愛之如父母，仰之如日月，敬之如神明，畏之若雷霆).

King Bhumibol is a great model of compassion and love, and had a number of wise sayings. He said, “A good person can make another person good; it means that goodness will elicit goodness in the society; other persons will also be good.” He also said, “Everyone must correct his own self, this is something more difficult to cope with, but it is not impossible.” I’m lucky to have had the opportunity to learn about King Bhumibol and I believe the world can learn a great deal from him.